The first views from Seoul:
After eighteen years, my first evening in Seoul--
from my hanok-room... 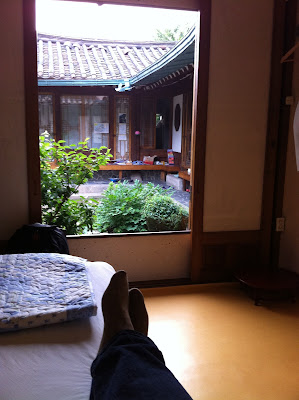 Ahh, feet up after hours and hours of planes and crossing the date-line over the Pacific...The Bukchon neighborhood is an oasis of calm in this post-modern megalopolis with ancient roots... 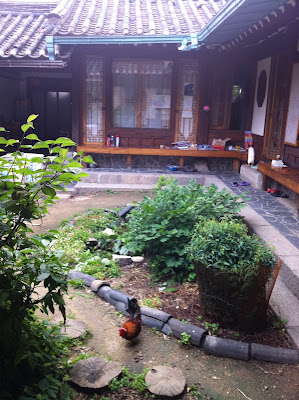 Yes, that is a little rooster you see. As I was saying, this neighborhood is peaceful encalve of traditional architecture and ambiance in the middle of this monster-sized city.
He didn't crow this morning until about 5:40 or so, though--and I was already awake. so no annoyance...
And in addition to Mister Rooster, there is a resident rabbit who acts as if he is a puppy: 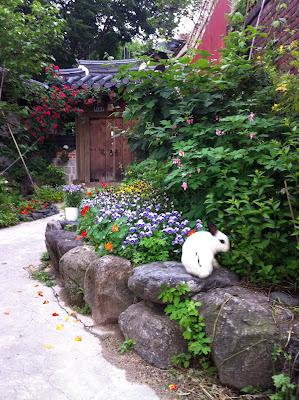 For my first couple of nights, then, I am staying in one of these hanoks that has been converted into a guesthouse--some are luxurious bed-and-breakfasts, others are more like pensions, with shared bathrooms. Mine is pretty simple--but to have an inexpensive, quiet place to sleep in the middle of a posh historic district around the corner from former royal palaces in a city of well over ten million: nice.
The rabbit's name is Mitchee.
From quaint lanes... 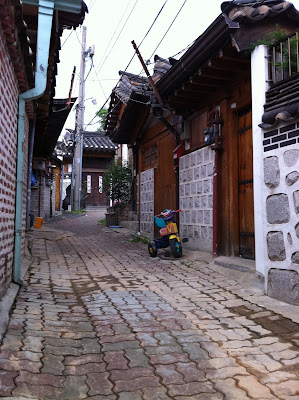 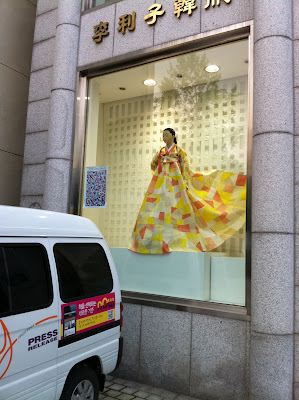 ...and gallery rooftop modern art installments--is that a crash-test-dummy take on the Pietà? 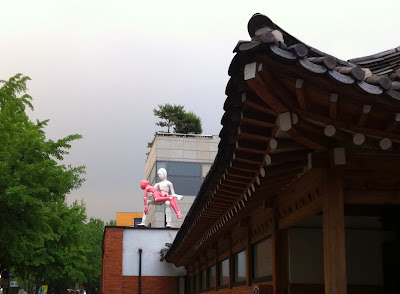 ...and heading out of the Bukchon village area toward the skyscrapers; no that's not camera distortion, those buildings are curving... 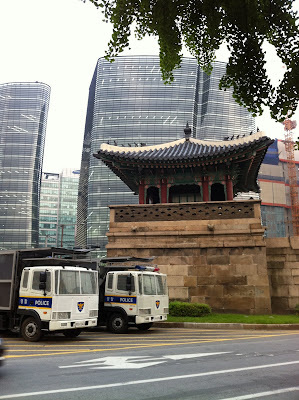 (This used to be a palace guard tower; now it's a traffic island)
I decided to go for a walk last night--wasn't sleepy. I think I may have avoided the worst of jet-lag by foregoing sleep my last night in Tucson. I had to be at the airport so early, so I decided I would just stay up, then try to rest on the plane, then hit the ground running in Seoul, staying awake until local bed-time.

It seems to have worked.

So, anyway--I went for a walk with nothing but my iPhone in my pocket...

This is Kwanghwamun Plaza, a relatively new pedestrian-zone in the heart of the city--lanes and lanes of traffic were reclaimed and converted into a vast plaza with fountains and statues. Kwanghwamun is the fortified gate in the distance--leading to Kyongbok Palace, which was the principal seat of government during the Yi dynasty. (Think Seoul's equivalent of Beijing's Forbidden City.) 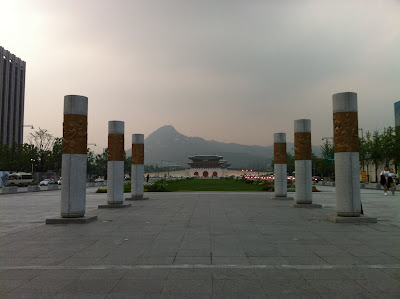 Along one side of the Plaza is the Sejong Performing Arts Center--Lincoln Center in New York might be a good equivalent...I happened upon a performance; turns out that during May and June, every weeknight there is a free outdoor concert (dance or music, traditional and modern, Western and Eastern), using the steps as seating. 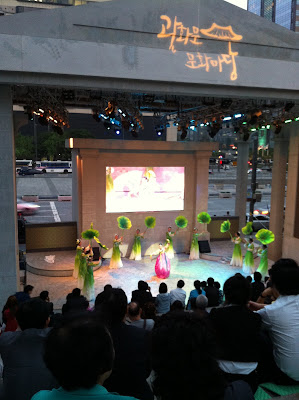 Young and old, kids on their way home from school, businessmen in suits, office girls, and a few Western tourists--all on the steps enjoying the dusk performance; last night was classical Korean dance--court and folk-tradition--it's corny-sounding, but the only word I can come up for the ambiance and the quality of the performance was 'magical.' 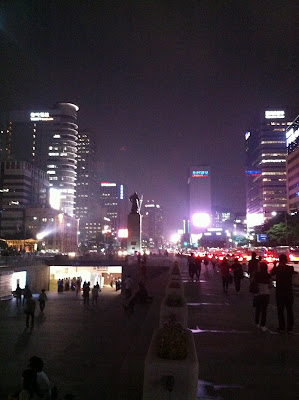 It was nighttime when the performance ended--back in Kwanghwamun plaza...In the distance you can see giant LED screens--they're throughout the city; makes sense, I guess, since South Korea is the world's largest manufacturer of high-definition large-screen televisions and LCD panels...
The street vibe reminds of Las Ramblas in Barcelona, actually--people of all ages out and about--strolling, snacking, still on the way home from work/school at 9 and 10 p.m....

Dominating the plaza in front of the Performing Arts Center is this statue of King Sejong the Great--fourth king of the Yi dynasty, who ruled in the first half of the 1400's...The base shows the original stylized forms of Han-geul, the Korean alphabet--the world's only alphabet that was specifically and scientifically designed to make literacy quickly attainable by all; until this invention, the Korean elite had traditionally used Chinese characters for writing--a cumbersome and time-consuming custom that made literacy all but unattainable for the vast majority of the 'common' population. Sejong and his cabinet ministers came up with Han-geul to remedy that situation. South Korea is perhaps the only nation in the world that has a national holidy for its alphabet. Seriously. It's October 9th. 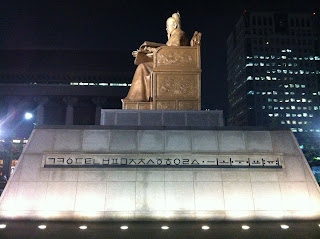 Back to Kwanghwamun, now lit up... 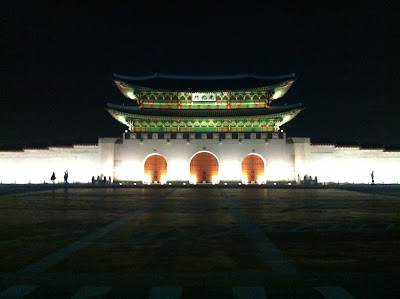 And...since I'm still awake, I may as well post a few photos from today.
Heading down into the subway: 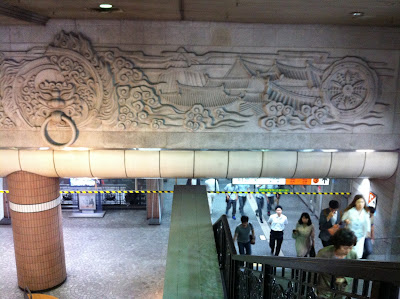 Before I took the train, this morning, though--I needed coffee. Seoul is FULL of coffeeshops (including, yes, Starbucks) but many of them only open mid-morning (!?)...but they stay open very late. Fortunately, right as I got down into the subway, I saw a "Paris Croissant" café. Yep--in the underground, here in Seoul. French bakeries are very popular here--so along with your kimchi you can get your croissant-fix.

As I sat there, having my pain-au-chocolat, I was having 'place-dysmorphia,' if I may invent that term.
What I mean is, I know I'm in Korea (duh), but sitting having a flaky pain au chocolat, with signage in French, and seeing people pass by on their morning commute into the subway, ladies wearing silk scarves, men with leather attachés, and EVERYONE on their smart phones--it felt like an Altaic-language-speaking version of Paris. Really. It did. Except for the fact that everyone has black hair and I can't speak their language fluently. (Yet. I hope.) I was taken back to when I lived in Paris. I'm not just saying that, either, just so I can say 'when I lived in Paris'...I really was.

Most of the rest of today was commune-with-nature-and-old-architecture-time.

The Huweon garden compound, to the rear of nearby Changdeokgung palace, (one of the other royal palaces in town), was originally built to be a forested retreat for the royal family. For years many people referred to it as Biweon--the 'Secret' or even 'Forbidden' Garden...but the official name is, again, Huweon. ("Who won" the game? Think that. The 'eo' in the official Romanization is phonetically misleading.) Nestled in the middle of hilly old-growth forest are pavilions, streams, and a vacation villa for the Yi Royal Family... 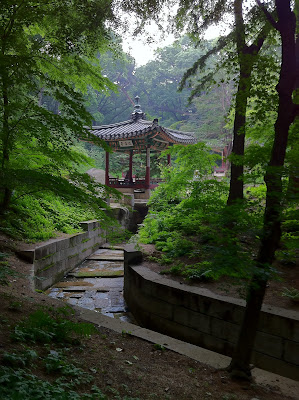 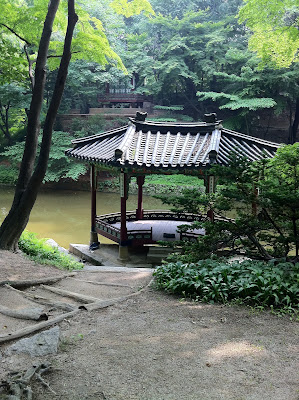 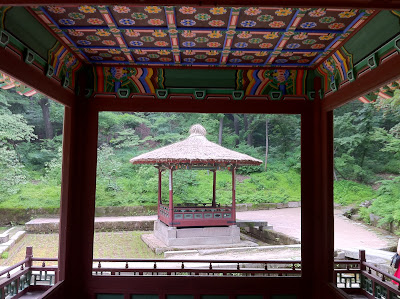 (The last time I visited these grounds was when I was fourteen years old...) 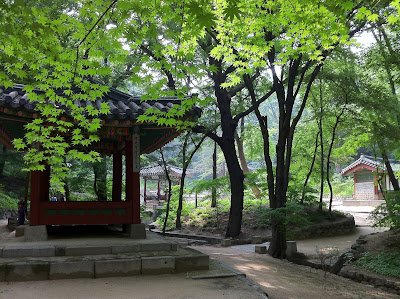 Tomorrow afternoon I go back to the airport to 'welcome' my mother back to her own country...

We'll stay in Seoul for a few more days, and then early next week,
we head over to the east coast of the country, where her brother lives.
Watch out--it's not on "The Sea of Japan;"
it's on "The East Sea" when you talk about it on this peninsula.
﻿
﻿
Posted by J. Cyr at 8:46 AM