From Little Tokyo back to Tucson: iphoneography with apps

From last weekend's quick road-trip to Los Angeles, a few scenes showing how to 'correct' or 'dramatize' an iPhone snapshot, whether a streetscape or a landscape.
(These photos taken with an iPhone5s)

On First Street, just east of downtown L.A.,
the iconic "Chop Suey Far East building,"
built in the 1890's,
and which served for much of the 20th century
as a hub for Little Tokyo's community
of Chinese and Japanese immigrants: 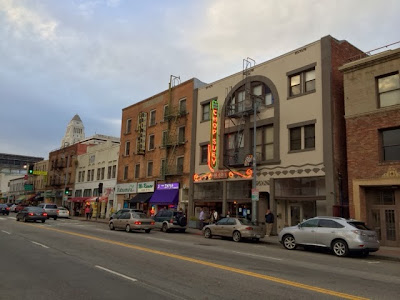 The distinctive arch and vintage neon sign, along with the street-front fire-escape-stairs make for a classic 20th-century American streetscape, and the Los Angeles City Hall (1920's) on the left adds to the sense-of-place...But the distortion caused by the angle from which I took this quick photo is distracting, and the sky looks washed out, since I wanted the exposure to show the building façades instead of the clouds.

So, first,
use the Perspective Correct App
to 're-set' the buildings as being perpendicular to the street: 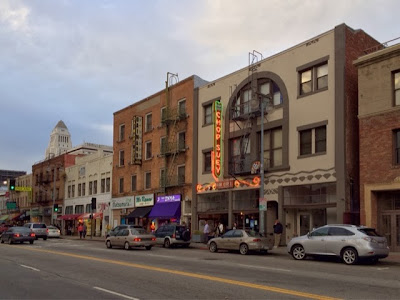 Then, using "Tune Image" and a bit of the "HDR scape" tools
on snapseed,
the drama of lifting clouds
and the texture of the bricks
reappear: 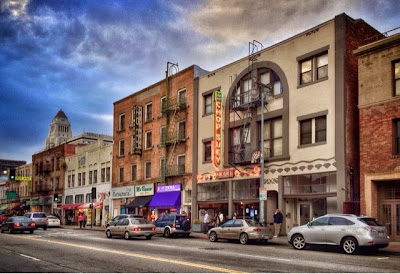 My wife liked the cinematic feel of this color version, but I thought this would work as a black-and-white scene, with just the "chop suey" sign highlighted in color...


...and so for this, the ColorSplash app comes in handy: 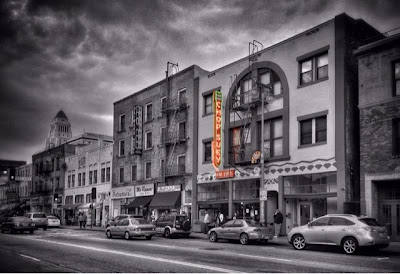 But the sky was a bit grainy for my taste,
so using the BigLens app,
the sky can be selectively blurred: 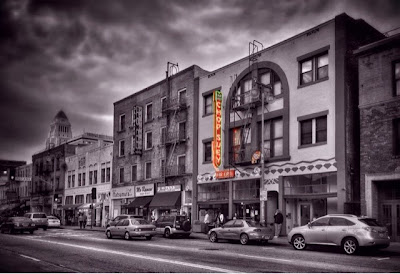 And, finally, using Mextures, some faux-vintage texture and color add to the mood: 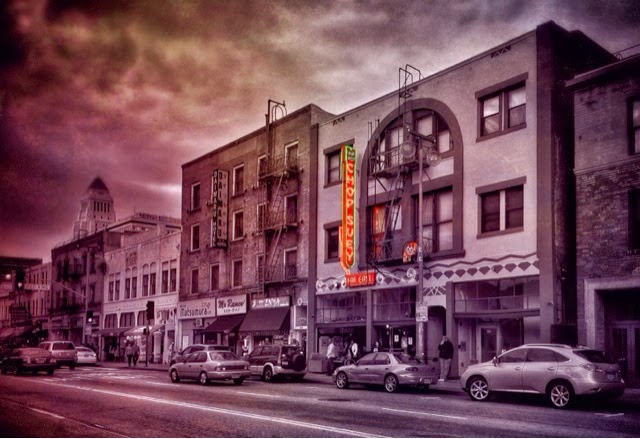 ==============================
On the drive back to Tucson from L.A. we passed through a normally boring stretch of desert that's come to life with wildflowers. I've lived in Arizona for nearly seven years, and I've never seen such an expanse of globemallow in bloom--for several miles along I-10 to the west of Phoenix, this was the scene: 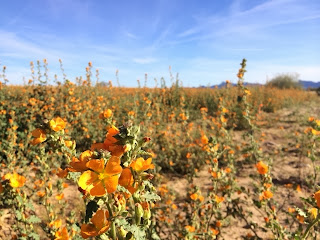 Bright afternoon sun 'bleaches' the scene,
so using snapseed again,
to crop and bring out the vibrancy of the blooms
by correcting the exposure,
I end up with this: 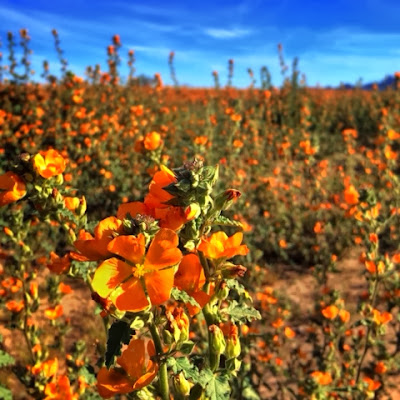 Back home, the foothills of the Santa Catalina Mountains
are dotted with brittlebush in bloom right now,
splashes of yellow on the saguaro-studded hills: 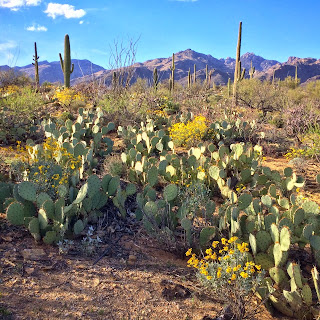 Taking this shot from close to ground level, however,
resulted in a slight distortion--
the saguaros are pointing 'outward'
away from the center of the photo.
So, using the above-mentioned
Perspective Correct, I end up with this: 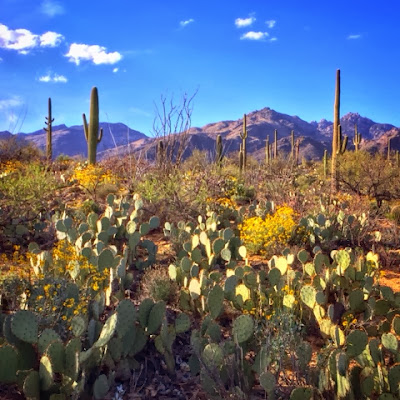 This scene also lends itself to 'color-splashing,'
so first I used snapseed
to oversaturate the color (above),
then I used the 'color-splash' tool within the Laminar app
to keep the wildflowers yellow
while de-saturating everything else in the scene (below).

Finally, for the textures in the final image,
I used Mextures again,
before some final exposure-tweaking and vignetting in snapseed: Spring in the Sonoran Desert...

So, from architecture to wildflowers, Perspective Correct
can be such a useful tool...
...and snapseed still remains my favorite 'go-to' tool.

The 'slap-on' filters available in so many apps and in so much of social media can be convenient, but if you want to get beyond the 'pre-fab' feeling you get when you use them for your photos, spend some time getting to know what you can do with an app like snapseed or Laminar. True, many apps are 'one-hit-wonders,' but even within those limited effects, there's so much potential customization available at your fingertips.
Posted by J. Cyr at 7:54 PM 1 comment:

Cilantro-daikon kimchi. Yep, you read that right. Well, it's more of a 'curtido'...

Cilantro. (Or, "coriander.)  You love it or you hate it. My introduction to it, when I was a teenager, did not inspire affection. Tastes like soap! How far I have come--I love those leaves now...

My mother is Korean, so I grew up eating all sorts of leafy greens..but 'cilantro?' I'd never heard of it. Neither had she...And most Koreans, when first introduced to the parsley-look-alike, don't like it--its distinctive aromatic signature just isn't found in the traditional Korean flavor palette...

...which is strange, given that China, which is just next door, has a long history of using cilantro.

So, recently, my wife and I were discussing this curious geo-culinary situation--and I thought that cilantro would marry well with traditional Korean flavors--perhaps even as a type of kimchi. "Ooh, maybe I'm inventing something!" Well, it didn't take too many searches on the Internet to realize that I wouldn't be able to claim authorship of a new dish--on KoreafornianCooking.com, I found this.

It turns out that cilantro does have, ahem, roots, on the Korean peninsula--in the North and also in the vegetarian Buddhist temple cuisine tradition. But for almost all modern-day South Koreans, 'cilantro-kimchi' just isn't in their vocabulary...

But it SHOULD BE...and if you want to try it out, below is my take on it.

And while I'm not 'inventing' anything here, I am modifying the recipe from the KoreafornianCooking.com website.
My first attempt ended up too salty for my taste--
and then, when I decided to try again, I thought that shredded carrots would add a nice contrasting color...
...with the end result: 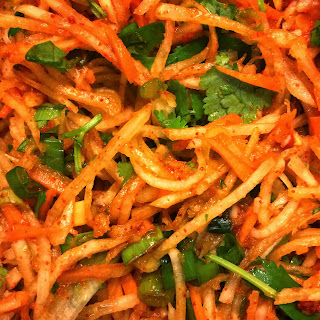 So, here goes with the recipe.

2 cups of roughly chopped cilantro
("goh-sooh" is
the Korean word for this herb)
1 1/2 cups of shredded daikon
(called "mu" in Korean,
and incidentally,
the equivalent for 'cankles.'
Make sure the radish is firm;
the texture should be similar to jicama.)
1/2 cup of chopped green onion
4 tablespoons of minced or crushed garlic
sea-salt--start with 1 teaspoon,
then add to taste as you mix
2 teaspoons finely minced ginger
2 teaspoons Korean red pepper powder
(sun-dried New Mexico red chile works too)
1/2 cup of shredded carrot
(vocab lesson: "dahn-geun") 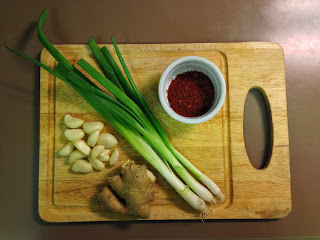 I forgot to include the sea-salt and carrots in the photos.
Sorry. 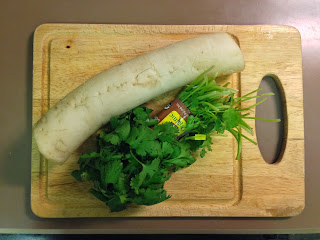 In a separate, small bowl,
mix the chile powder, ginger, salt, and garlic into a paste.

Then, using your hands--
wearing disposable food-prep gloves!--
slowly work the pepper garlic paste
into the vegetables in the large bowl,
rubbing the seasoning in...

As you finish, taste and see if the vegetables are salty enough.
Yes, kimchi should be salty,
but not overpoweringly so...

You'll notice that the vegetables will shrink and that a reddish liquid will be gathering in the bottom. Don't throw this liquid away--let the shredded vegetables 'marinate' in this liquid at least overnight, storing the mixture in a covered container or a large glass jar.

You can eat it right away--
it's a nice salad-with-a-kick, but the flavors marry better after a few days...

It's a great side with kimchi-quesadillas...

...and, it also works as a filling for a
California-roll style kimbap: 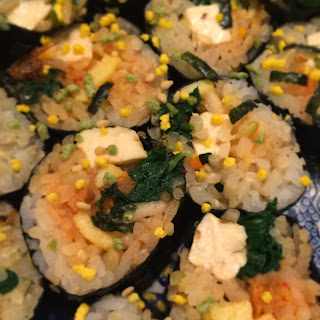 (For this, a mixture of brown and white rice,
rolled up in the seaweed with
the daikon-cilantro kimchi,
seasoned spinach, thinly sliced omelet,
pan-fried tofu,
and sprinkled with furikake seasoning.)

And again, a close-up of the end-result:

...which, after tasting it, I thought--
hmm, the texture reminds me a bit of El Salvadoran curtido,
the traditional accompaniment to pupusas...

Add a splash of vinegar (seasoned rice vinegar or white balsamic)
if you want a 'fusion-curtido.'

Wait: maybe I have invented something--just as Roy Choi invented the galbi-taco and the kimchi-quesadilla...
...I just did an internet search--nothing comes up for "Korean curtido" or "curtido coreano" and I don't think there are any El-Seoul-vadoran food-trucks out there. Not yet at least, so...