Back to Seoul; along the Han river...and night lights in Myong-dong

...approaching Seoul from its eastern suburbs along the Han River--weird to see the middle of a bridge completed before the connections to either shore are built: 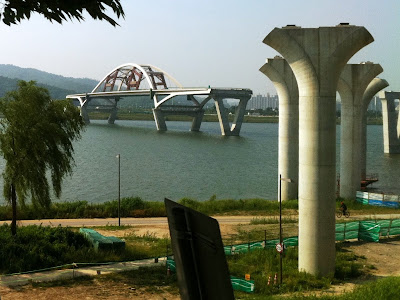 ...closer in to the center of the city, the Olympic Bridge; built for the '88 Olympics, it wasn't actually completed until 1990:

...stuck in weekend traffic, I had time to take three photos from the same spot and stitch them together:

Namsan and Seoul ('N')-Tower are on the horizon...

The banks of the Han River have been turned into parks--even with outdoor gyms! Check out the equipment available: 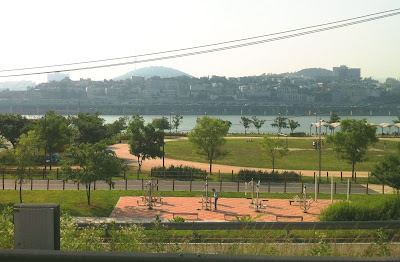 ...the bikers on the path were probably going faster, on average, than the traffic on the riverside roads... 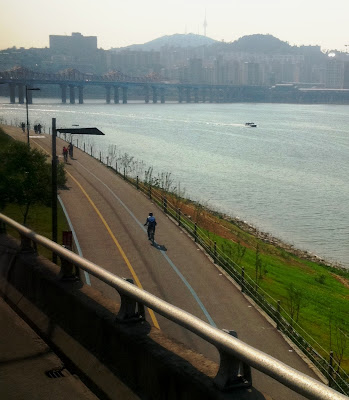 We got into the Express Bus Terminal over an hour later than 'scheduled.' Upon entering the building from the bus-drop-off zone, this tote-bag for sale grabbed my attention; I had to stop in my tracks and take a picture of this spectacular specimen of Engrish: 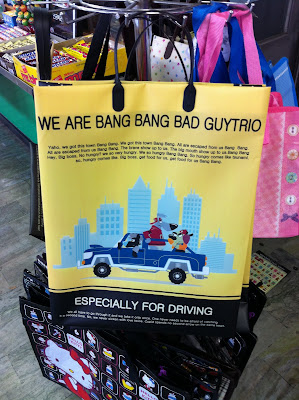 I know it's hard to make out in the photo (although you can double-click it), so I will re-type it here in all its fractured glory:
"Yaho, we got this town Bang Bang. We got this town Bang Bang. All are escaped from us Bang   Bang. All are escaped from us Bang Bang. The brave show up to us. The big mouth show up to us.Bang Bang Hey,  Big Boss, No hungry? we so very hungry. We so hungry Bang Bang. So hungry comes like tsunami. so, hungry comes like. Big boss, get food for us, get food for us Bang Bang."
Spectacular, yes? And here's the bottom of the tote bag, under the "Especially for Driving:"
"We all have to go through it and we take it only once. One never needs to be afraid of catching it a second time. No, we never sicken with love twice. Cupid spends no second arrow on the same heart."
Huh?!?!?!?!?!?!?
So, is Bang Bang one of the dogs?
And why the mention of Cupid?
And how is this 'Guytrio' bag 'especially for driving?
Oh, Mystery
wrapped in a riddle
inside an enigma,
stuffed inside...
...a tote bag.
After a crowded subway ride from the Express Bus Terminal, I check into the hotel on the slopes of Namsan on a narrow street above Namdaemun Market, then check my e-mail (still no up-date about S's flight situation), and then head out--a short walk down the hill to Myongdong. (Also spelled Myung-dong, Myeong-dong, with- and without dashes--this area is often compared to its better-known Japanese counterparts, the Shinjuku and Ginza areas of Tokyo.) It's one of the shopping and financial headquarters of the country... 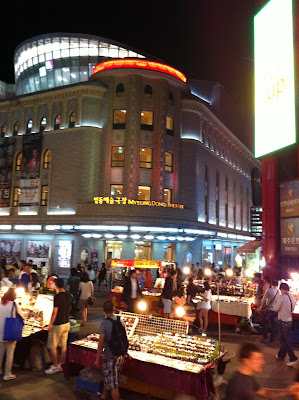 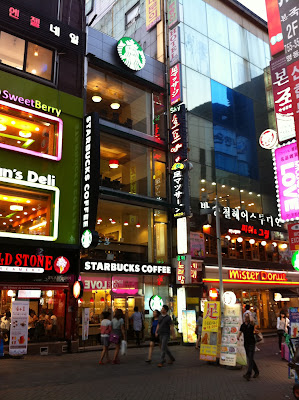 A multi-story Starbucks! Myongdong used to be home to the world's largest Starbucks, but since the district has some of the highest commercial rental rates in the world, that location is gone...but still--pretty impressive...I saw at least three other Starbucks on my stroll, plus a half-dozen other local chains and a few 'unique' ones as well--this is one caffeinated city...although, (random trivia here, gleaned from a newspaper article), over 85% of the coffee consumed in this country is still (alas) instant. (Blech)
Super-chic boutiques, youth-culture chain stores, restaurants, fake-Rolex hawkers in the streets...and, of course, street food: 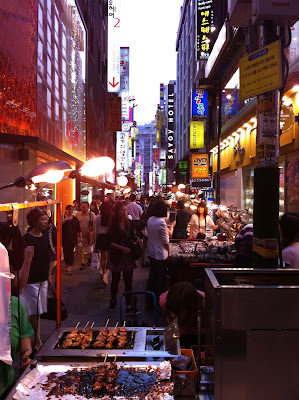 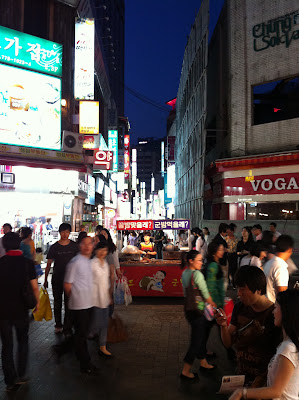 Serene purveyor of roasted chestnuts, still in the midst of the commercial chaos...

...had my solo-dinner at a restaurant famous for its 'Cheonju bibimbap'--check out all the banchan side-dishes that come with the hot brass bowl of rice topped with meat, seasoned vegetables, a sweet/hot paste and an egg that you have to stir in so that it'll cook 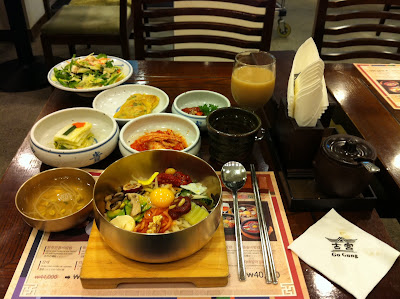 An incongruous fixture next to all of the commercial frenzy--the Myongdong Cathedral sits on the highest hill in the neighborhood...Built in the 1890's, designed by French missionaries--this neo-Gothic structure was among the first Western-style buildings built in Seoul...There was some controversy at the time--would it be appropriate for foreigners to build such a large structure on land higher than the Royal Palaces? 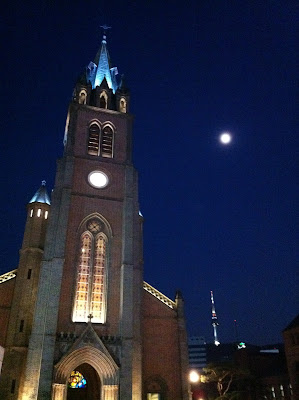 Throughout the 20th century, student and political demonstrations have often started in the plaza in front of the Cathedral--it's truly at the heart of modern Seoul history...
(Incidentally, a cousin of mine--one I don't know, way older than me--got married here years ago...)
It's a bit hard to make out--but in the background, behind this snack-stall, can you see it: Yep--'Krispy Kremes!' doughnuts from "the South" in South Korea...The snack-stall in the foreground is selling 'oh-deng' (Japanese fish-'sausage'-batter, for lack of a better word) on a stick--I got the version wrapped in 'geh-nip'--a perilla ('wild sesame') leaf that has an intense herbal flavor... 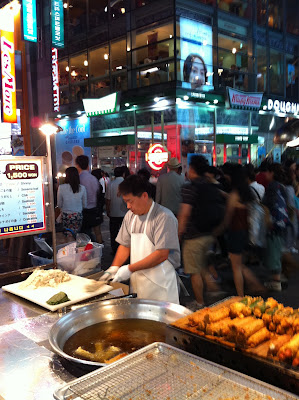 ...and finally--another, non-churchy, French connection in this neighborhood: although Koreans are not big bread-eaters, Seoulites do like their French bakeries, right across from the street each other, in fact: 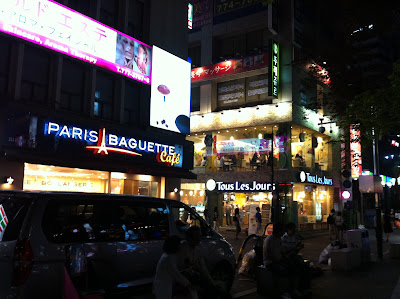 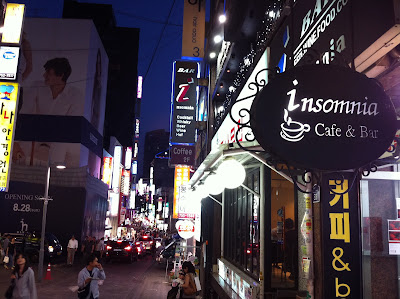