I hope this entry will not come across as obnoxious. What I mean is, I hope no one in more northerly climes will read this and think, "oh here we go--another one of those people in Tucson who just loves to remind the rest of us how wonderful their 'winter' is, all sun and golf, while the rest of us are shoveling snow..."

First of all, I don't golf. And while it is true that some here engage in mean-spirited winter-weather-schadenfreude, I am not one of them. My wife and I have been hearing from friends and family up in Washington state, for instance, in the last few days--all the snow! How fun it would be to be holed up in a cozy house with friends and family, drinking hot chocolate, and then going sledding or even doing some urban-snow-shoeing down to the corner coffee-shop...

Instead, on this first day of winter, the shortest day of the year, I went on a 12-mile-hike with a friend. No, it was not 'warm.' In fact, when I went to pick up my friend, his backyard thermometer read 29 degrees. And when we started on the trail, there was frost...But, yes, there was sun. (And, okay, yes, by the afternoon, it was in the 60's...)

So, tonight's entry then--some photos from Romero Canyon, just north of Tucson in the heart of the Santa Catalina mountains. This is in in the spirit of 'sending a postcard,' wanting to share the scenery...
...a bit of 'Arizona dreaming on a winter day'... 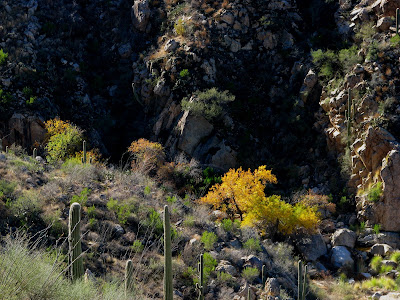 The cottonwoods in southern Arizona are hitting their peak autumn colors--on this, the first official day of winter...In the desert, cottonwoods only occur along ceekbeds or riverbanks. 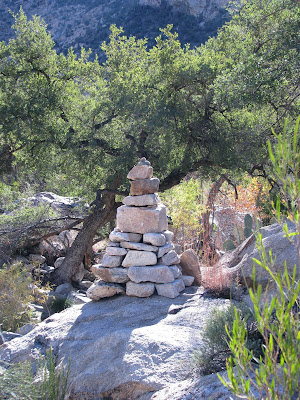 This trail in particular has lots of hiker-built cairns to guide the way... 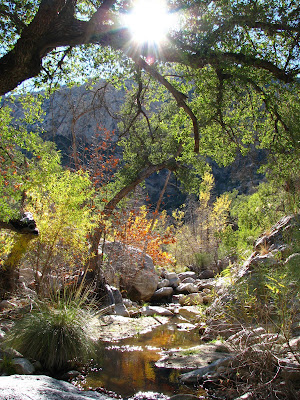 ...crossing Romero creek, which runs almost year-round, except during drought-years... 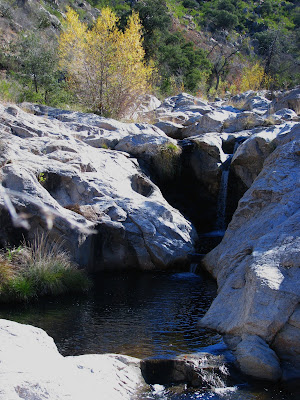 The 'Romero pools' are a popular hiking spot in the summer--one of the few natural swimming areas in Tucson... 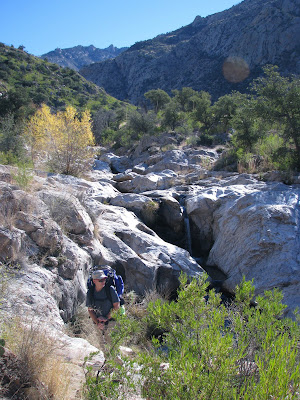 The trail continues switchbacking across the creek for 7 miles into the heart of the mountains, leading up to a 6000-ft. pass. With the early sunset on this, the shortest day of the year, however, just one mile away, we had to turn back; we wanted to avoid scrambling down steep cactus-studded slopes in the dark...so we'll have to go back when the days get longer... 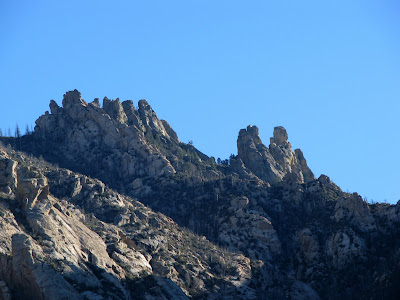 ==========================
And tonight's flora-minutiae.
The nights haven't been cold enough yet to wither the bougainvillea, so when my mother comes to visit us in a couple of days, she'll be able to enjoy the blooms. The neighborhood grapefruit trees are heavy with ruby-reds; So this was yesterday morning's front-patio breakfast: 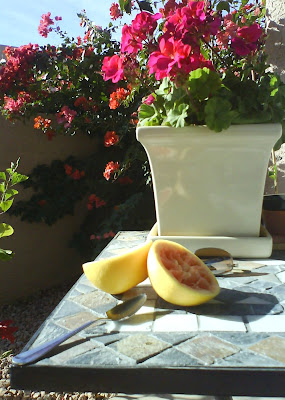 Okay, so maybe I am 'bragging' just a little bit about winter in Tucson. No--not 'bragging,' but just 'appreciating!'
It's still a novelty for us, to be citrus locavores sitting on a sunny patio in late December!
Encouragement. We're encouraging our friends and family to come visit. Come and pick your own oranges, lemons, or grapefruits. Come, go for a hike and get a winter-tan.
A hiatus from the snow. Tucson dreaming...

(And it's supposed to be cold and rainy on Tuesday, by the way.
Be thinking of us, then...)

out of the classroom, a few hours later...

After work, after errands...the evening light on the season's first substantial snowfall on the mountaintops behind Tucson:

...the view of the central Santa Catalinas from our neighborhood... 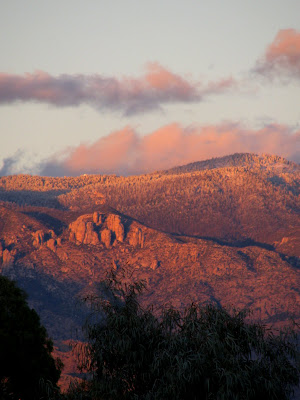 ...I love the verticality of climate and season in southern Arizona: from the cactus-zone to the grassland-zone up to the oak-and-juniper-zone to the wintry pine-zone, finally to the mixed evergreen forest above 8000 feet--all in one shovel-free 'backyard' view: 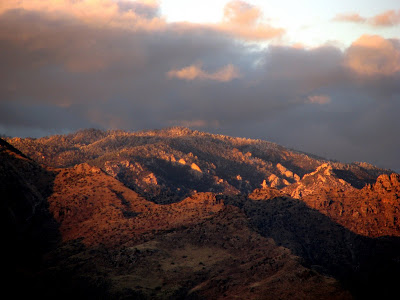 Actually, tomorrow is my last work-at-school-day before winter break, but today was the last day with the kids, and I just finished giving exams!!

And so, a celebratory phone-camera shot from my lunch-break classroom: 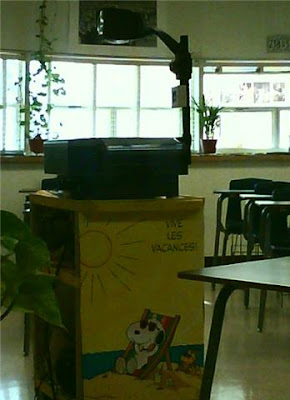 Yep, here in Tucson, in the 21st century, I'm still using good-ol' mid-20th-century technology: the overhead. That's "rétroprojecteur" in French, if you want to know. And I must explain: I inherited the Snoopy-vive-les-vacances poster. Corniness in the high-school-foreign-language classrom is inescapable, no? 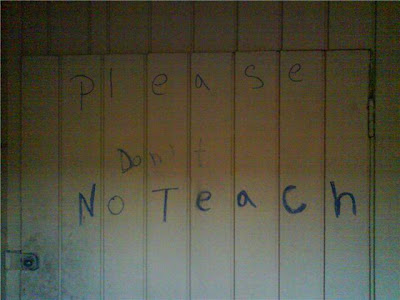 I saw this sign while visiting some recently-arrived immigrants in an apartment complex. Just around the corner from where I teach, this complex houses people from places such as Iraq, Congo, Tanzania, Burundi, Chad, and Somalia.
Mystifying? We finally 'deciphered' it--evidently someone was trying to write "please don't touch" on a stairwell door. Surely, a lot to learn...
Okay, okay...lunch is over. Back to grades...
Posted by J. Cyr at 10:38 AM No comments:

In research that touches on two of Americans' great obsessions — coffee and cars — scientists at the University of Nevada, Reno, have made diesel fuel from used coffee grounds.

The technique is not difficult, they report in The Journal of Agricultural and Food Chemistry, and there is so much coffee around that several hundred million gallons of biodiesel could potentially be made annually.

Dr. Mano Misra, a professor of engineering who conducted the research with Narasimharao Kondamudi and Susanta K. Mohapatra, said it was by accident that he realized coffee beans contained a significant amount of oil. "I made a coffee one night but forgot to drink it," he said. "The next morning I saw a layer of oil floating on it." He and his team thought there might be a useful amount of oil in used grounds, so they went to several Starbucks stores and picked up about 50 pounds of them.

Analysis showed that even the grounds contained about 10 to 15 percent oil by weight. The researchers then used standard chemistry techniques to extract the oil and convert it to biodiesel. The processes are not particularly energy intensive, Misra said, and the researchers estimated that biodiesel could be produced for about a dollar a gallon.

One hurdle, Misra said, is in collecting grounds efficiently — there are few centralized sources of coffee grounds. But the researchers plan to set up a small pilot operation next year using waste from a local bulk roaster.

Even if all the coffee grounds in the world were used to make fuel, the amount produced would be less than 1 percent of the diesel used in the United States annually. "It won't solve the world's energy problem," Misra said of his work. "But our objective is to take waste material and convert it to fuel."

And biodiesel made from grounds has one other advantage, he said: the exhaust smells like coffee.


And it's time for end-of-the-year re-caps of 2008.
So, for some photojournalism highlights, click here for the link to
the International Herald Tribune's 2008 in pictures.

Local minutiae:
The Catalinas got their first substantial snowfall the past few days,
and we've eaten our first couple of oranges from this year's front-yard crop.
My students have their final exams tomorrow and Thursday, and then:
vive les vacances!

Monday afternoon, out front...
After work, after errands--the first thing I want to do when I get home is take my shoes off...
This afternoon, though, I kept them on, running inside to get my camera and then running back out to stay on the front patio for a few minutes: late afternoon light, bougainvillea, hummingbird: 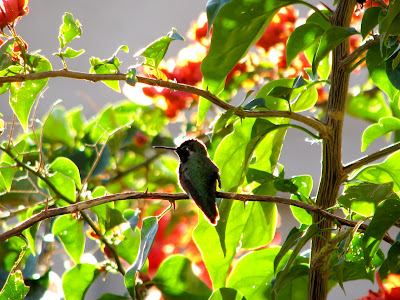 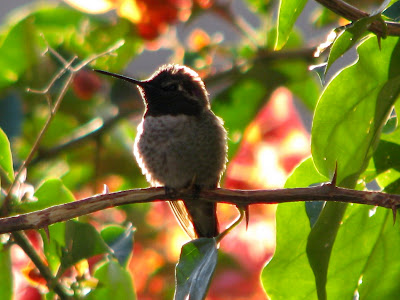 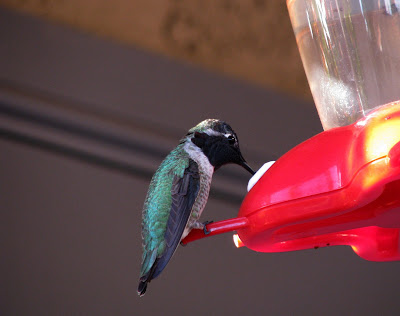 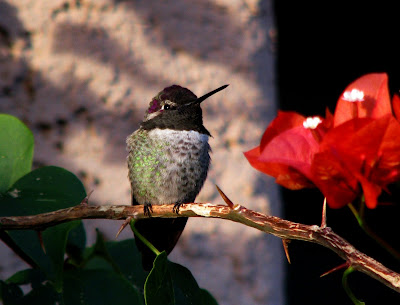 I guess, growing up, I had taken hummingbirds a bit for granted--we would see them quite often in our backyard in Georgia...but then when I moved to Seattle and saw that even way up there, some hardy species would stay all year, even in the winter, that impressed me...and when I lived in France, it was pointed out to me that hummingbirds are native only to the Americas...In Nicaragua some of the species are so large that the locals call them 'gorrion' instead of 'colibri.'
Here in our tiny front yard, though, we have Calypte anna, "Anna's Hummingbird," which is a year-round resident in the Sonoran desert, just as it is even up in to the Pacific Northwest. 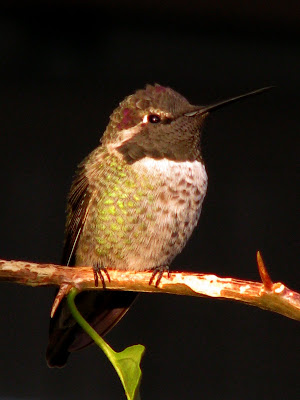 The light in the bougainvillea (wicked thorns!) was fascinating; I thought I would play with the 'color accent' feature of my camera: 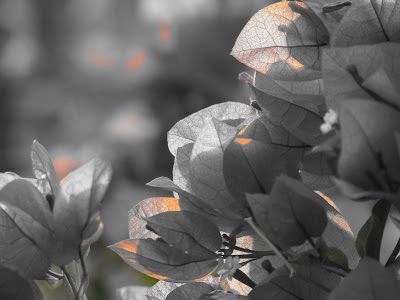 The bright papery 'flowers' are actually the leaves on the end of each stalk; the actual flower is a tiny white bloom in the middle of each bundle of color. 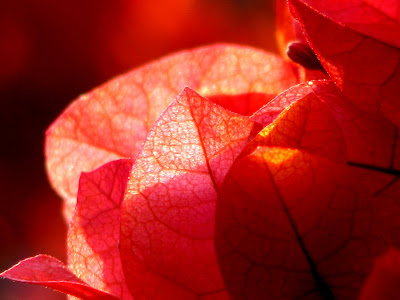 And to round off tonight's minutiae, our citrus update: 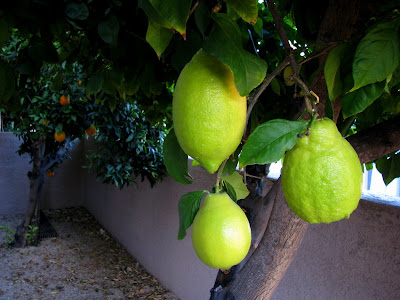 Just a couple of weeks away from huge lemons and navel oranges. Our second winter here, and I still find it 'exotic'...