Wife's flight delayed...everyday scenes around Sokcho...can your remote do all this?
(Scroll down for 'photo-essay' directly, if you want to skip my airline rant in the first few paragraphs.)
Customer "service"--due to weather, my wife missed her connecting flight in San Francisco--so she won't be arriving in Seoul today. The ticket counters were understaffed, and when my wife asked one of the agents if she could help, the agent told her "just call United; I can't help you; be more pro-active." Wow. That's customer-service--the person at the counter--there, alive, in the flesh--says to make a phone-call to the 1-800-number?! Are you kidding? And then has the nerve to say that the passenger needs to be more pro-active!!
And of course--since the missed connection was due, not to mechanical issues, but to meteorological conditions, the airline will not pay for my wife's hotel--she has to spend the night in San Francisco, and wait as a stand-by passenger tomorrow...Otherwise, she will 'definitely' be on the United flight THE DAY AFTER...(so, two nights at the airport hotel?) Hmm...could we not re-route with another airline? There are many flights from San Francisco to Asia...The hotel I'd booked for us in Seoul can't be canceled, so later today, I'm going to head from Sokcho to Seoul anyway--at least I'll be closer to the airport in case some miraculous flight comes through and my wife gets here only one day late instead of two...
So I'm still in Sokcho, instead of on the early bus to the west coast...
A few everyday scenes from around town:
"Hahng-ahh-ree"--the huge barrel-shaped jars that are de rigueur in any Korean yard/patio/garden...In the past, they were used, among other things, to store food outdoors in the winter--nature's refrigerator for various kinds of kimchee, fermented sauces, miso ('dwehn-jahng' in Korean), etc...Nowadays they're still used for food-storage, but also for decoration, rainwater, etc.... 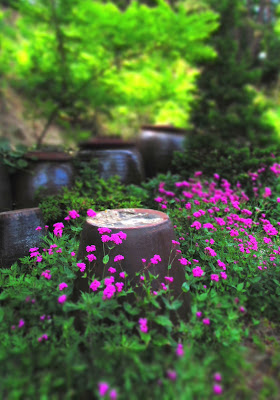 The hahng-ah-ree above were actually outside of a restaurant--here's an interior view of that "sheek-dahng:" 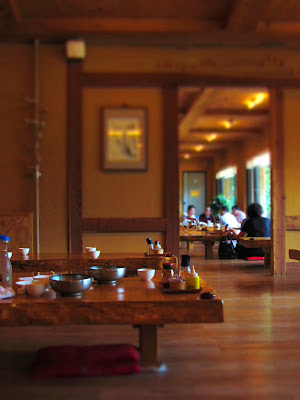 (locally famous for it's cold buckwheat noodle dish)
...one of the old homes in the "Ah-bah-ree ma-eul" neighborhood--originally a temporary home for refugees from North Korea...this is the part of Sokcho that feels like stepping back in time: 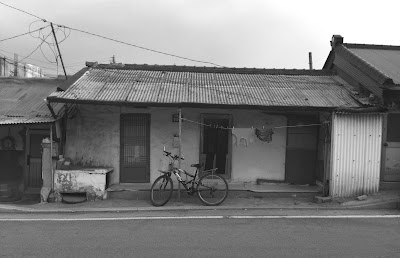 ...at the central seafood market downtown; mackerel--mmm mmm mmm; it's underappreciated in America, I must say...fresh-caught and freshly pan-seared; ain't nothin' better: 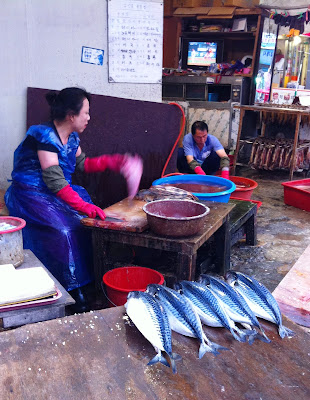 "Goh-doong-uh" = mackerel..."Shee-jahng" = market
...still at the seafood market--making 'oh-jing-eo soon-deh,' the 'sausage' that uses the squid itself as a casing, stuffed with rice and vegetables: 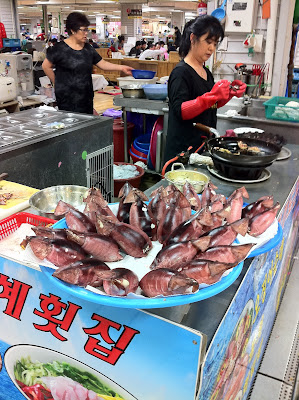 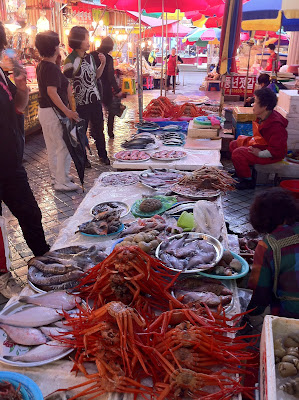 ...even with a super-sleek super-modern supermarket around the corner, many people still buy produce from these little pick-ups that drive around the neighborhoods--with sing-song 'advertisements' broadcast from loudspeakers...on this truck, garlic for sale--"mah-neul:" 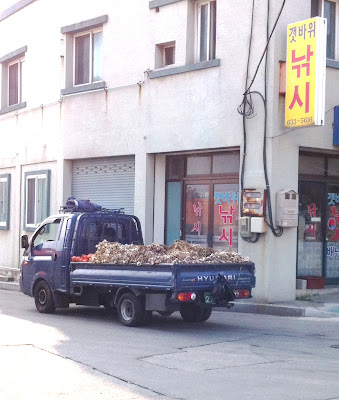 You'll never see this in the U.S. or Western Europe, eh?--a cutesy squid-mascot on a storefront: 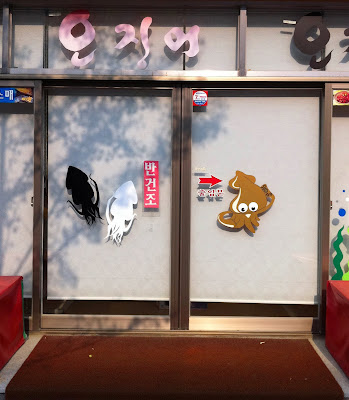 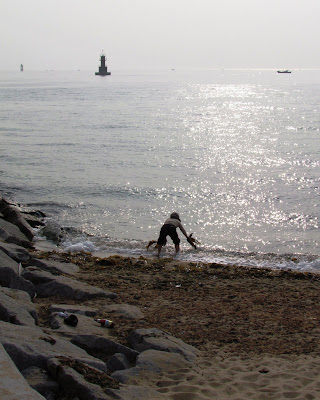 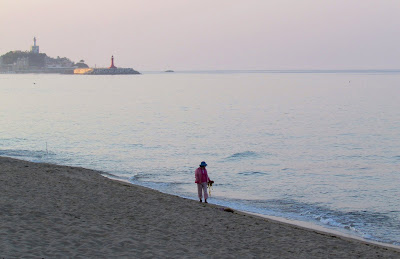 ...ain't we got kelp?
...parts of Sokcho are overbuilt with high-rise hotels & vacation-rental-condos,
but there are still pockets of vegetable-farming; 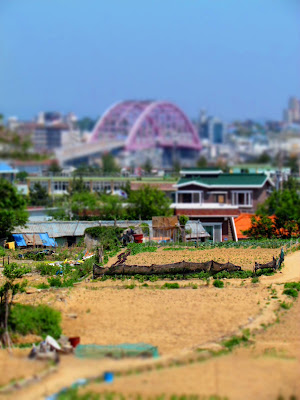 (these views are right behind my Uncle's place) 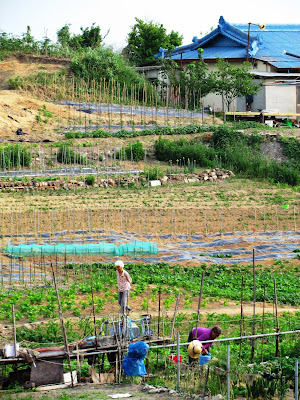 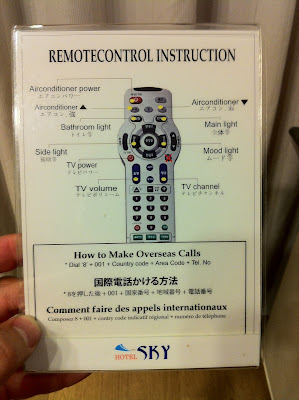 Can your remote do all that?
Signing off, still in Sokcho...
I'll be in Seoul from this evening until next Thursday,
meeting my wife hopefully tomorrow if not Monday...
Posted by J. Cyr at 6:31 PM