Arrival in Sokcho. Mountains and Squid...and a neighborhood of 'temporary' houses...

We are here by the sea, on the opposite side of the country from Seoul.

Eighteen years ago, the journey took about 5 hours, on curving mountain roads...Today it only took about two-and-a-half--we must've gone through 20 or 30 tunnels; I lost count...As soon as one leaves Seoul, the mountainous reality is unavoidable; the oft-cited figure of the country being 80% mountainous is no exaggeration...Some people call Korea the 'Switzerland of NE Asia' due to its rugged terrain--I would agree...and going through all the tunnels on smooth wide highways, I thought of Switzerland, not just because of the mountains, but also because of the engineering--both societies have responded to their challenging terrain and small political boundaries by means of infrastucture.

A few bus-window views, then, on the way...over the river and through the woods:

The slopes are all thickly wooded; my mother talked about how, when she was a little girl in school right after the war, there was such emphasis placed on reforestation--so many of the country's mountains had become denuded during the Japanese occupation and the Korean War (especially in the north--napalm was first widely used here)...
Until 2005, in fact, Arbor Day was a public holiday here. My mom remembers going out into the countryside with her classmates--planting seedlings, and hiking around with little cans to capture 'greedy' caterpillars and grasshoppers that would otherwise thwart the nation's efforts to reforest its slopes!
But not all the forests are second-growth; some are old-growth, especially in the mountains along the East Coast, whose terrain is so steep that there weren't any major battles fought in the mountains here, near Seoraksan National Park: 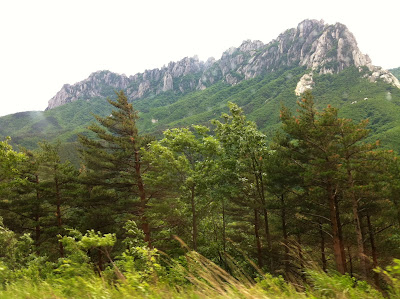 ...The rice paddies still reflect nicely; the seedlings are too new to cover the water from view...
by late summer these paddies will be a lush, dark green: 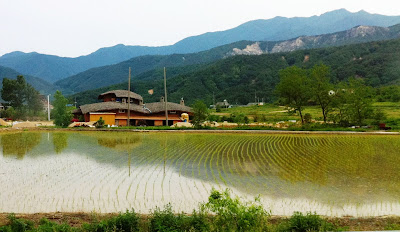 Although there are many seaside vacation-rentals, it is still very much a working fishing port with a certain grittiness. It ain't quaint...but the setting is lovely, between the mountains and the sea...Great efforts are being made to convert it to a seaside-vacation-town--note the cranes...but it's definitely a work-in-progress.

From the top of that bridge, looking down: 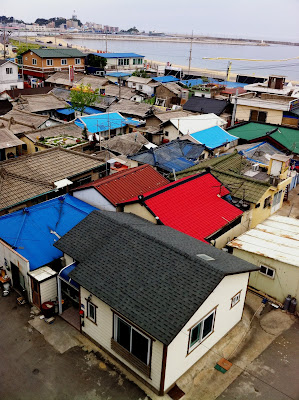 Colorful roofs, but claustrophobic quarters, eh? This neighborhood is a relic of the Korean War. It's nicknamed "Ah-bah-ee Village." In the dialect of neighboring Hamgyong-province, now isolated in North Korea, 'ah-bah-ee' is the equivalent of 'ah-bo-jee' ("father") in standard Korean...
When the war broke out, scores of families from what would become North Korea fled to this area--building what they thought would be temporary--so therefore small and close together--housing. But when the DMZ was fixed, they found themselves stranded on this peninsula between a lagoon and the sea...nowhere to go...And so their 'Ah-bah-ee village' remains as a working-class neighborhood. It's now popular with tourists for seafood restaurants...
So, while it may not be the most charming, 'postcard pretty' place, it's a real piece of human history and architecture--picturesque in its poignant way...
My uncle lives on the southern edge of this historical area; so this--the constructed legacy of refugees--will be the scenery for 'my neighborhood run' for mid-June...
The sea-air is a nice change from Seoul...
(although, the traffic and the smog aren't as bad as I remember...)
Coming here from Seoul is like going back in time; it's a far cry from the polished cosmopolitan-ness of central Seoul...the rusticity and the construction-rubble--it's an 'invigorating' contrast from the Capital.
Such a small country, (South Korea is the size of Utah...but with 48 million people!) with such diferent regions. 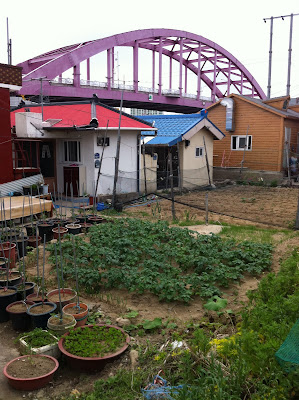 No land to spare--so no land goes to waste--
truly 'postage stamp' gardens
for growing vegetables to go with dinner...
...and speaking of dinner: 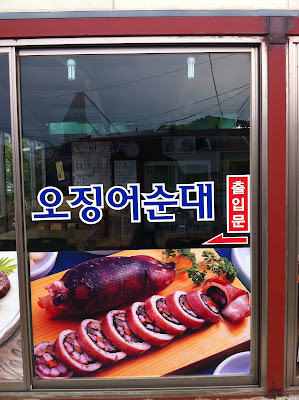 Scary? or appetizing?
It's 'oh-jing-eo soon-dae,'
a local specialty--a 'sausage' made of
a whole squid ('calamari' just sounds prettier...)
stuffed with rice and vegetables--
when sliced, quite pretty...
We didn't eat in this restaurant; we bought it to go...
So. Squid. Lots and lots of the fishing boats here go out into the sea at night;
they use lights--squid swarm in the way that moths are attracted to light bulbs...
You can see them swim at the local market in the middle of town!
A vast indoor (underground) space of tanks full of continuously flowing seawater,
with the day's specimens--it's like SeaWorld, except that it's all for dinner! 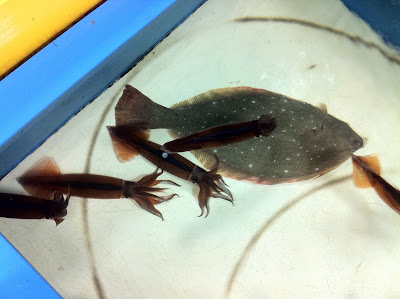 Sokcho.
'Home-base' for the next couple of weeks...﻿

I happened upon this website tonight:
"12 rules for expat life in Korea"
http://www.cnngo.com/seoul/life/12-rules-expat-life-south-korea-067384
Flippant, but fun.
Posted by J. Cyr at 7:40 AM