No insights/opinions/pontificating--just SNOW!
Snow down in the Tucson basin is always exciting...

Yesterday, that is...(Today was 70 degrees)...I slept in a little later than I wanted to, so I didn't get to actually see the flakes falling, but the car windshields in our neighborhood were covered in white--our back patio table was covered in slush, and cars driving from further east were blanketed... The sun was coming out, and things were beginning to melt quickly, so I gulped down half a mug of coffee, put on a sweater and drove down to the park down the street:

The back area of Udall Park, behind the soccer fields, is a 'natural' creosote flat area...not particularly scenic, but from there you can get a good view of the whole Santa Catalina Range--and as as you can see above, the snow was practically down to the base of the mountains...All of the mountain ranges around the city--even the low Tucson Mountains and the Tortolita range (site of the current golf championship tournament at the Ritz-Carlton) were completely white...

Crazy late-winter weather--Saturday was 70 degrees...Today was 70 and the day after tomorrow will be up to 80...but Saturday night a front came through and dropped the temps almost instantly...Mid-day on Sunday, as we were out and about, we drove through a couple of 'snow-pellet' squalls in the foothills...

Perhaps winter's last hurrah for Tucson.
Last week I went for a long run out in Saguaro National Park, (yeah--finally!--my first 8-miler since having pneumonia), and the first desert marigolds and fairy dusters have already begun to bloom...
Posted by J. Cyr at 9:40 PM 1 comment:


Huh? Yep--an idea is floating around, gaining momentum, apparently. With all of the revolutionary action in North Africa and the Middle East, why not spread the spirit of revolt from the sands of the Sahara to the sands of the Sonoran Desert?  Here'sThe article in yesterday's New York Times that alluded to this movement:  "Arizona Lawmakers Push New Round of Restrictions."  Now, note today's headline here in Tucson: 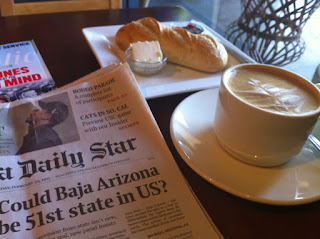 (I have the day off--it's "Rodeo-weekend" in Tucson--
instead of a Presidents' Day school-break,
we get a four-day weekend for the annual "Fiesta de los Vaqueros"...
thus, the leisurely latte-with-baguette-breakfast,
along with the time for gratuitous iPhone photos and blogging...)


And there IS historical precedent--in the early 19th century, Maine broke away from Massachusetts...and during the Civil War, West Virginia broke away from its Confederate/slave-holding 'mother'...


A tongue-in-cheek proposition:
http://www.bandersnatch.com/bajaz.htm
(This has been around for years, by the way...but never as a serious proposition until now.)

So. This is where we live. Tucson, the would-be-capital of a potential new state.
Two weeks ago, S. and I headed up to Seattle for a quick four-day visit. (Our friends' wedding was lovely.) But being 'back home' where 'home' is no longer--lots of mixed feelings. Voluntary as our move to Arizona may have been, we can't help but feel, at times, that we are in exile. Overly dramatic, that phrase, perhaps, but I can't come up with another word...
An old family friend, an ex-pat from the UK who's spent most of her adult life here in the US, has said that living in two countries 'makes one a citizen of both and a citizen of neither.'
Hear hear. I wish we could just fold the map--bring the bookish amenities of Seattle right next door to the open landscape and sunny climate of Tucson...marry the cityscapes of Paris and Seoul...the deciduous forests of the East Coast and the evergreens of the mountains Out West...combine the friendliness of Nicaraguans with the relative functionality of North American public service...the Asian food of San Francisco and Los Angeles with the Mexican restaurants here in Southern Arizona...the Canadian concept of universal health-care with the lack-of-long-waiting-lists south of that border...
Fold the map. Erase the lines. Be happy.
If only.
(And to all our friends whom we just got to see briefly two weekends ago--it was so good to see you! We're sorry we couldn't have spent more time TALKING and getting caught up! Alas...)

Today's minutiae:
It's sunny--will be in the mid-60's today.
This weekend will see snow, though, down to the base of the mountains here--temps in the 40's.
Our frozen week earlier this month completely shrivelled our citrus trees; will there be grapefruit this year?
After walking pneumonia and then a sinus-something I caught on the flight back from Seattle, I am finally feeling closer to 'normal'...Looking forward to a run among the saguaros this afternoon...
Posted by J. Cyr at 9:08 AM No comments:

Remember how it was popular for a while, among Americans traveling in Europe, to put a Canadian patch on their backpacks? They hoped to be seen as 'friendlier,' or perhaps 'less politically offensive'...

Now AZ residents (known in the SW as 'zonies' in other states...kind of like people from Maine are 'mainiacs' elsewhere in New England) are starting to feel that being known as someone from the Grand Canyon State is a similar liability. (Any of you catch the big article in last week's TIME magazine re: Arizona's loco-status?...not to mention how comedians and news commentators are having a field-day with AZ...)

By the way, if you're going to put a Canadian Maple Leaf on your backpack, you have to know some basic Canadian facts.
--They speak French up there?!
--Stephen WHO? Harper. Yes, Harper. He's their national leader. No--not a king--nor a president. A prime minister. Yes, a 'prime minister.'
--Queen Elizabeth II is also technically the Queen of Canada.
--It's "Canada," not "Canadia."

After two weeks of pneumonia--only the 'walking' variety--I am up and running again.

Winter has done its damage down here too though--several nights of temps in the teens last week--thousands of homes here were left without water (frozen pipes) and also no heat--too high of a gas demand! Prickly pear cacti have been decapitated by the rare cold and any remaining citrus fruit on the trees has turned into pithy mush...
Posted by J. Cyr at 1:33 PM No comments: