From the sea to the mountains and back...(with a semi-gratuitous puppy-shot thrown in)
It rained last night--cleared out the summer haze, so I awoke to this view this morning: 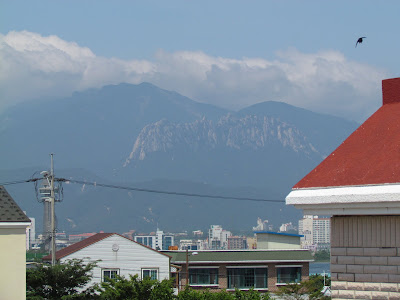 Here's the view towards 'Ul-san-ba-wi' mountain, in Seorak National Park, from my Uncle's rooftop.

A morning run, then, around the waterfront--BIRDS!

...and then lunch--an action shot...what is being stir-fried? Look closely... 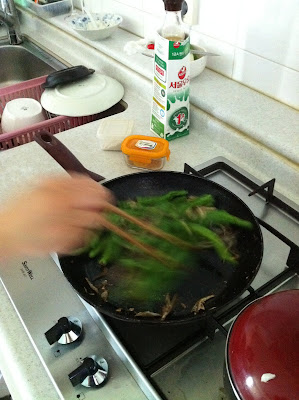 ...among other things, a side-dish of thin green chilies with--yep--tiny 'caramelized' dried anchovies!
(This is not what is served to most Americans in Korean restaurants State-side, eh?) 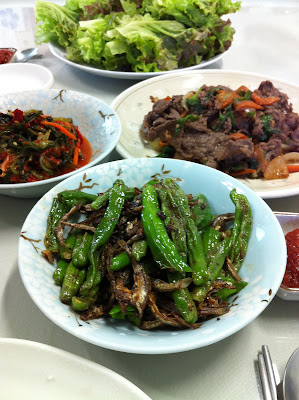 I know it's hard to believe, but it's extremely tasty--and nutritious!
Korean cuisine, traditionally, was light on meat with practically no dairy...
However, this combination gives you tons of vitamin C and lots of calcium.
Got peppers-and-fishies?
After lunch, it was almost completely clear, so we drove fifteen minutes (only!) into the park's main valley, and took the cable car up to one of the peaks... 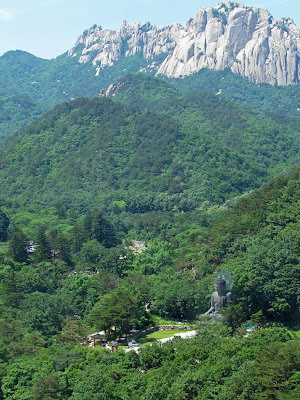 ...from the cable-car,
this is the view 'behind' Ulsanbawi,
looking down on the main Buddha
of Shin-heung-sa Temple,
which dates back to the 630's A.D.;
it's the oldest "Seon" (that's 'Zen' in Korean)
temple in the world.
From the top, the view back towards Sokcho
and the East Sea (remember--that's the politically-correct
way, in Korea, to refer to 'The Sea of Japan.')

...and zooming in--you can see the lake/lagoon in central Sokcho; see the little island toward the right?
That's 'Jodo' island, and just beneath it, on the peninsula--that's where I am sitting as I type this:

(I must say, I love the zoom on my camera)
More mountain views: 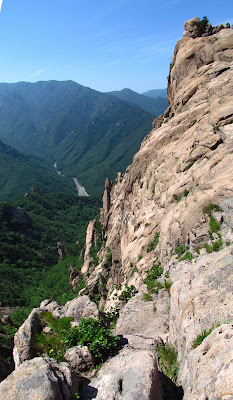 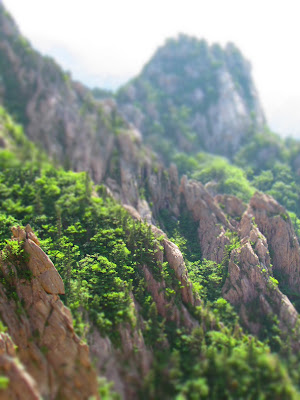 (I've been playing with the 'mini' feature on the camera;
fun to make huge landscapes look
like 'toy-world' scenes.)
We took a scenic detour back to town--
in one of the valleys parallel to the national park,
we met this dignified (and friendly) watchdog,
guarding Jinjeonsa temple,
(built during the Silla period: 57 BC - 935 AD) 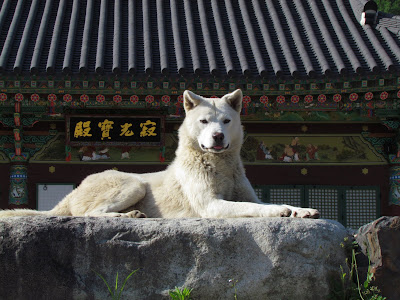 ...and who can resist a puppy? 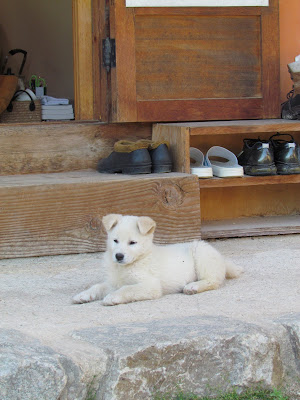 So, papa...and son...
friendly mountain temple dogs.
Driving back down to the coast--villages that have kept the traditional architecture, including this splendidly restored home: 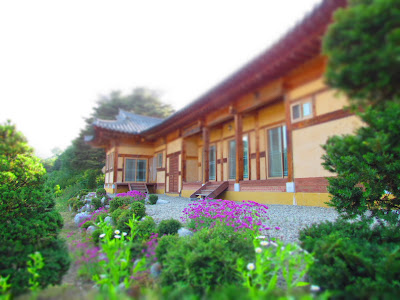 ...the freshness of early summer--young rice paddies, or 'baby rice' as my aunt said, using her colorful but limited English vocabulary. (We joke that my Korean is like her English!)

...and evening--after dinner, I 'raced' the sunset
to get to this hilltop in time, about a kilometer or so
from where we're staying:

...and the waterfront, closer in to town; dusk is very forgiving to mediocre architecture, eh? 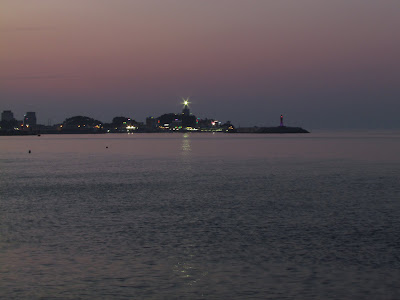 The day after tomorrow I return to the opposite coast;
my wife is flying in from the States; after several days in Seoul,
we'll return here.
Posted by J. Cyr at 7:07 AM