To begin with, a quote attributed to Charles V (1500-1558):
"I speak Latin with God, Italian with musicians, Spanish with the troops, German with lackeys, French with ladies, and English with my horse."

A linguistic snapshot, (tongue-in-cheek, even in its day), of the Rennaissance-world...

I've always found the words of this polyglot ruler fascinating; they get me thinking of my interest in languages and what I've ended up using them for.

Hmm...to adapt Charles V's language-list to my life:
English as a matter of course--everyday life in the U.S....Spanish and French as my wage-earning tools...Spanglish with my Hispanic students...Franglais simply to torment my wife...French when irritated while stuck in traffic...French when my wife and I want to speak in public in Tucson without being understood...Spanish when wanting to get good, friendly service in restaurants in Tucson...Spanish and French also closely linked to our volunteer work...German as my 'fossilized' childhood soundtrack...and Korean--on the 'backburner' my entire life--always on a low simmer, but never fully boiling to fluency--not yet at least. Yes, I know, it's an awkward metaphor, but...

When I was seven years old, I ended up spending about five weeks visiting Korea, and by the end of that winter, I was comfortably conversational with my relatives. (Ahh, the ease with which children 'pick up' a language...) When I returned at the ages of fourteen and eighteen, no such 'miracle' occurred. Alas...

Meanwhile, I had begun studying French in school...I'm not sure if I took to it, or if it took to me more easily, but whatever the case, my father's mother's tongue became my ticket to studying abroad and to my college degree, to living abroad...and now, to my bread-and-butter as a language teacher...When I was in college I also continued studying German (I fit in one year in high-school) and then added a bit of Spanish...
...and I never would've guessed that one day I would marry a woman who would willingly leave the civilized Pacific NW to go live in hot, lowland Nicaragua with me, where we both were immersed in the language! And so with that experience, Spanish, too, is now part of my pan y mantequilla as a language-teacher.

In graduate school, I was able to squeeze in a year's worth of Korean classes 'on the side...'
And the past few weeks, my drive to- and from- work has become my own personal Pimsleur-CD-Korean school...

Korean is classified by the U.S. State Department, along with languages such as Chinese and Arabic, as being among the most difficult for native English-speakers to learn. Why? Well--to begin with, there are few cognates...I mean, come on--having to learn the French liberté and the Spanish libertad for the English freedom--it's not exactly rocket science, eh? Science--science--ciencia...no?

So, Han-guk-eo is challenging because there are few cognates....and of course, there is the different writing system (although the Korean alphabet is actually scientifically logical and super easy to learn)...and finally, the SYNTAX.

Here's an example.
In English: "I often travel to Seoul for business."
In Korean, literally: "I-as-for often Seoul-to business travel-do."
Got it?

One more.
English: "Our house is in front of the pharmacy."
Korean: "Our house-as-for, pharmacy-in-front-of  located  is."

And then there's the question of the verb-endings--the grammar changes depending on social standing--who are you talking to? what's your relationship with that person? That changes the grammar itself, and occasionally, the vocabulary.

One does get used to it, though.
But 'getting used to' is not the same as 'becoming fluent quickly.'

Learning, and re-learning, my mother's tongue, then...
Some people jokingly refer to the syntax of the Korean language as being 'Yoda-like...'
...this reminds me of another quote...yep, this time from Yoda himself--the wisdom of Star Wars:
"Do, or do not; there is no 'try.'"

Succinct advice for language-learners.
Either I'm going to do it, or I'm not.

A while back, I mentioned the African proverb:
When an old man dies, it's as if a library burns down...

Language is the key to that library when you have elderly relatives abroad...
I hope to get in before it's too late...
============================================
So...thinking of where I'll be in a week,
I came across this photo earlier this evening--gives a good idea of the mountainous terrain of Seoul, along with the grounds of Kyong-bok-gung palace in the middle of the city. You can see the upswept roofs of the ceremonial gates leading to the throne hall of the Yi Dynasty palace:

(taken by R. Koehler, the author of the best Seoul guidebook out there,
from: http://www.seoulselection.com/)

======================﻿﻿
So, next week, I leave for Korea;
after eighteen years away, I'll be spending about four weeks there,
in Seoul and also on the opposite coast, in the city of Sokcho,
at the foot of Seoraksan Mountain National Park...
No other country in history has modernized as rapidly as South Korea;
within one lifetime--my mother's--from completely war-shattered third-world ruins, it has become the world's most Internet-connected society, one of the world's largest computer, cellphone, automobile and ship manufacturers; the world's tallest building, the 2000-ft+ Burj tower in Dubai, was built by a South Korean company, Samsung.
Crazy.
Here's one of the last photos (scanned; taken by a cheap point-and-shoot camera)
I took the last time I was in Seoul: 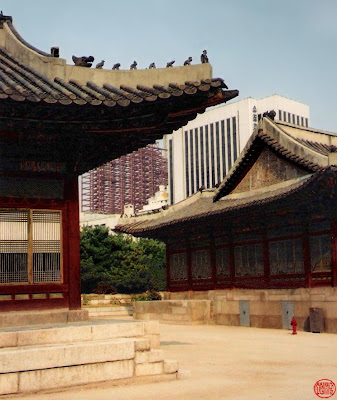 ...one of my last days there, in the fall of 1993--
new construction going up just behind
the grounds of Deoksugung palace,
(late XVI c.)


...I just had to post this whimsical doodling of one of my students. He's a quirky, but very bright kid,
and completely unbidden, he produced this parody of Botticelli's "Birth of Venus," entitled "Birth of Vinnie," (ha!) and it's even signed with a nom de guerre artistique: 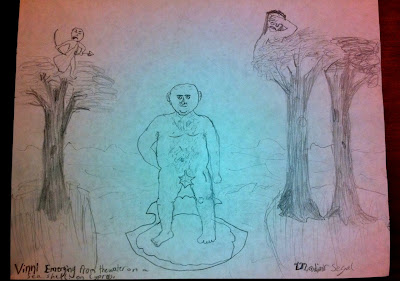 I love the facial expressions!
From Rennaissance Italy to 21st century Tucson...
'Vladimir' gladly gave me his permission to take a picture of his pencil drawing with my iPhone...
Merci!
...and...finally...

...unrelated--incidental--as the schoolyear winds down, (tomorrow is my last day with students!), this 'inspirational'-spoof from despair.com truly speaks to me: 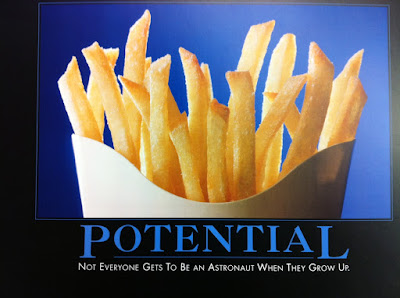 (Does my finding delight in the poster above make me a 'bad teacher?')

Summer.
One more week, and I'll be on the other side of the world.
Han-guk-e ka-yo...


...can't wait to EAT!
Check out this TV spot--I'm not sure where it's airing,
but it's a visually fun (if somewhat corny) ad for bibimbap,
a typical rice and vegetable dish--and it includes some traditional costume dancing:
Posted by J. Cyr at 11:44 PM