Last Wednesday, I posted that I had just signed up for a half-marathon... (This is a nice event, too, in that it's varied--on the same morning, on the same course, there's a 5k, a quarter-marathon, a wheelchair-race, and the 13.1. So...all you friends who live in colder climes--come on down next March and run in the sunny desert with me!)

So...this morning--I DID IT! My second one! The Phoenix half-marathon in January got me started, and I think I'm 'hooked' now...

Earlier this year, when I caught the 'walking pneumonia' that was going around at the school where I teach, I missed an entire month of long runs...So I really didn't think I should try again so soon, but with the beautiful spring weather, I thought--hey, I'm back to my regular weekly runs, why not just TRY a half-marathon again--even if I end up running it a lot slower than I did in Phoenix, so what? I'm not 'competing'...

It was a chilly start--49 degrees as the sun came up over the Santa Catalina Mountains...The route takes you through rolling high desert--from the foothills of the Catalinas to the foothills of the Tortolita mountains--so scenic, its suburban reality notwithstanding...

Here's an elevation profile of the course--HILLS:

Along with the fact that I hadn't gone on any runs longer than 9 miles recently, the hilly terrain led me to have a more modest goal-time of finishing in, maybe, 2hrs10min...

(I'd finished the pancake-flat Phoenix course in 1hr58)...

By the time I got to mile ten, this morning, though, I realized that I just might be able to finish in less than two hours after all! So I pushed hard the last three miles...and finished in 1hr59!! Just barely, but still--a sub-2-hr. time! With hills! and without recent long training runs! AND...I'm not writhing in pain! 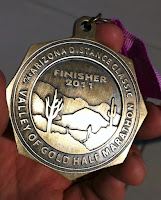 (I can only hope this posting doesn't sound self-congratulatory...but seriously, I am thrilled at my time today...and still bemused that I've taken to running later in life than most peple--I like running?--moi? oui, moi.)
The view from the parking lot at the finish line: 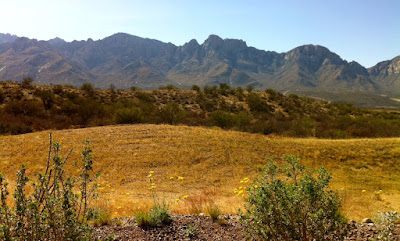 ...just a few desert marigolds in bloom in the foreground--after this year's unusually dry winter, the Catalina foothills are a far cry from last year's wildflower show in the same area:

With flowers or without--a beautiful spring morning to go for a run in the desert...
Posted by J. Cyr at 9:41 PM 1 comment:

Friday-afternoon preview of Sunday morning; fun with phone-camera after work

After work today I needed to drive up to the far NW side of Tucson to pick up my packet and t-shirt for Sunday's half-marathon...The running-store where I picked those things up is not far from the actual course for the race, and I hadn't been up in that area in a while, so I thought I'd drive along the running route.

It's not actually in Tucson; it's in Oro Valley--intriguing name for a town only incorporated in the mid-1970's. There is no 'downtown.' It's suburbia: strip-malls of chain-stores and traffic...but it's suburbia-with-scenery. The 'backside' of the Santa Catalina Mountains is gorgeous--canyons and uplifted outcroppings soaring above the saguaros. 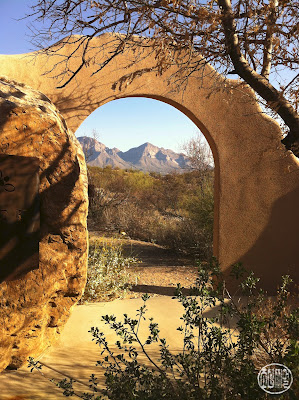 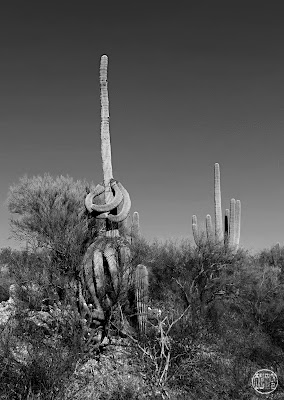 (...gotta love panorama-stitching apps on the iPhone...)
These photos were taken in an area along the route called
'Honeybee Canyon,' a natural preserve surrounded by
the Rancho Vistoso 'master planned community.'
Looking forward to Sunday morning...
Posted by J. Cyr at 10:53 PM No comments:

We're coming up on five years now, since my wife and I returned al norte after our year-in-Nicaragua...

A friend of mine pointed out to me recently that Anthony Bourdain (chef/writer/tv-show-traveler) had a new episode of "No Reservations" featuring Nicaragua on the Travel Channel. We don't have cable tv, so we weren't able to watch it, but maybe some of you saw it? (Ironically, when living in Nicaragua, we did have cable--over a hundred channels! solamente 6$/month!) I can't say I endorse Mr. Bourdain, but he is a gifted writer, and some of his episodes are gems...Anyway...

Here are a few things I gleaned online about it:
THIS is the official Travel Channel info about it--it's supposed to air again at the end of the month.
Click here for a video preview ...
Pupusas--not 'native' Nicaraguan, but mmm, centroamericano streetfare at its best...

From Bourdain's own blog, he writes:

“Nicaragua is a spectacularly beautiful country. The food is great. The rum even better. The people are proud, generous, funny and sophisticated at every level of society. I hope the show makes people want to visit this poor but beautiful nation with so much to offer–to see not only what Nicaragua is, but what it can be.”
Amen...Visit La Tierra de Lagos y Volcanes...
Go to Nicaragua!...and see what it can be; if you only see what it is, it's too sad.
(How true that is for so much of the world...)

(Click here to buy this book--
this was our logistical guide when we decided to move there.
The Lonely Planet guide is good, but this one goes deeper.)
Posted by J. Cyr at 10:02 PM No comments:

Email ThisBlogThis!Share to TwitterShare to FacebookShare to Pinterest
Before it gets too hot...
...I'd like to run another half-marathon here in southern AZ. So, during my lunch hour today, I signed up for a race for this upcoming Sunday:

This event will take place at the base of the NW side of the Santa Catalina mountains--very scenic, and March is perfect running weather here in Tucson.

I don't think I'll be able to run it any faster than the one in Phoenix back in January--I missed 2 weeks of running due to being sick a while back, and this route has a few hills--but I'm excited that it'll be closer to home and that it'll benefit cancer research...and I'm just excited by the fact that I'm still enjoying running so much!


Truth be told, I've become maybe even a bit 'dependent' (?) on running--to keep sane, to clear my mind after troublesome days in highschoolland. 'Teacher' is not an accurate job-title for what includes being an arbiter, insolence-fighter, pop-psychologist-motivator, vocabulary-police, ethics-instiller, etc. etc.--it's like trying to herd cats some days! I am perfectly willing to handle youthful exuberance, passing immaturity, attention-hopping--but insolence pushes all my wrong buttons. Or maybe they're the right buttons...At any rate, some recent insolence had become long-term and tiresome, and fortunately, the issue has been resolved. (The kid is out of the classroom...woo-hoo!)


We had a bit of rain the night before last--but the YTD rainfall for Tucson is less than 15% of what it should be! Yes, it's a desert...but still! So--no fields of wildflowers this year--no vast carpets of poppies and lupine, alas...But the temperatures are perfect, and I'm looking forward to 13.1 on Sunday morning.


Before things get too hot, run.