Mom's last day in Seoul...Insadong...Jongno Tower...learning to use my new camera at night in Kwanghwamun Plaza
Tomorrow we're off to Sokcho, to my uncle's...
Today, then, was my mother's last day here in the Capital. Mom's been a low-pressure traveler, and with her still-recovering knee, she's not wanted to run all over town. So, after a leisurely morning, we walked several blocks (her therapy) to the Insa-dong district; known for its arts and antiques.
During the Joseon (Yi dynasty) period, the area was the headquarters for the royal government agency for arts and paintings. (Scholarly calligraphy was a highly prized skill, even among bureaucrats! Can you imagine if politics included that today?) And since that time period, the paper, scrolls, and brush-supplying neighborhood has mushroomed into a vibrant arts district...along with the kitsch that international tourists demand, but still, one of the most interesting neighborhoods in Seoul...
The district is so different from the last time either my mother or I were here--much more commercial, and much more crowded--but still, tree-lined and mostly pedestrian...I love the windows: 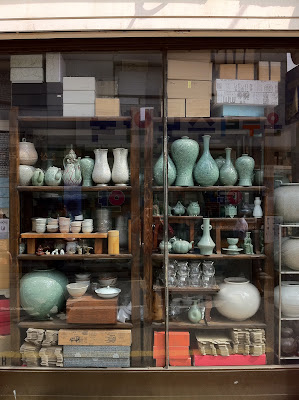 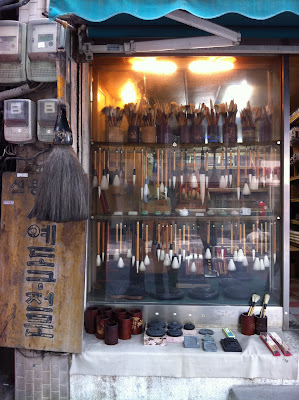 ...and some of the side-alleys still have a few traditional buildings--nothing like the concentration in Bukchon, but the 'old soul of Seoul' can still be seen: 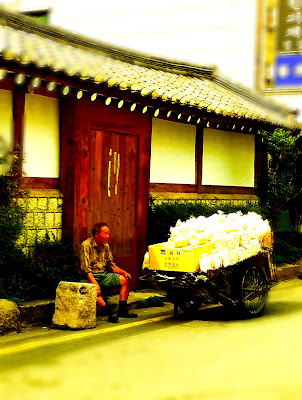 (A vendor taking a well-deserved rest in the shade after a long day of carting around popped-rice-snacks...cellphones allow much more discreet people-photography...I've always shied away from taking pictures of strangers...)

This couple demonstrated the traditional way of steaming and pounding glutinous rice to make "tteok," a kind of 'rice-cake'... 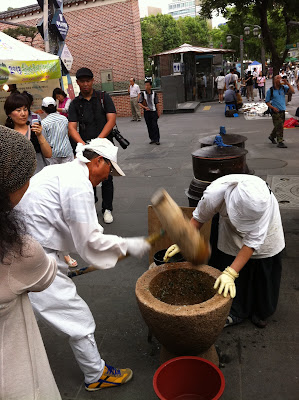 ...back near our hotel, I happened to look up and noticed the wording on this building that I've passed half a dozen times in the past couple of days: 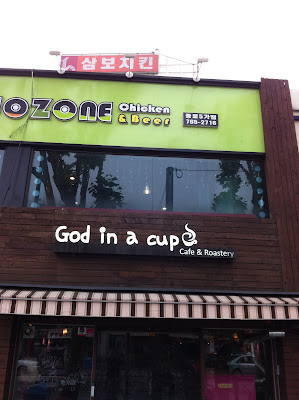 Somebody takes their coffee WAY too seriously, no?
As in, blasphemously so...
After a full day of walking, browsing, shopping and snacking, my mother had had enough 'therapy,' so I took her back to the hotel for her to get off her feet...and then I headed back out to finally get up close to the Jongno Tower, which I've seen from almost every angle from different parts of the city since I got here last Wednesday: 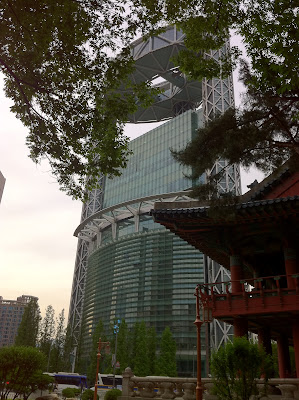 "Jongno," the name of the building and the avenue on which it is located, means "Bell Street;" during the Yi dynasty, the bronze bell that hangs in the pavilion beneath the Tower (in the photo above) was rung twice daily, to signal the opening and closing of the city gates...it's still rung for special occasions, such as New Year's...
From the top floor, you can look east and see one of those city gates--Dongdaemun, at the head of 'Jongno:' 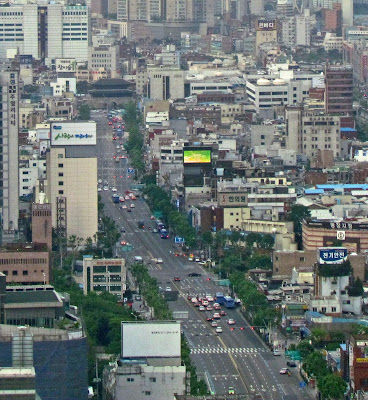 Alas, there is no public observation deck﻿ at the top--just a posh restaurant...but the 'landing' area in front of the elevators is open to the public...as are the restrooms: 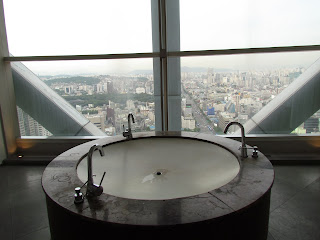 Firstly, a cool circular sink...secondly--that's one of the more scenic backdrops for handwashing, eh?
Looking towards Namsan: 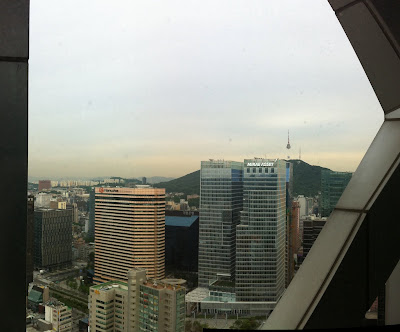 ...and then, looking down, through the hollow part of the building over which the top floor is 'suspended:' 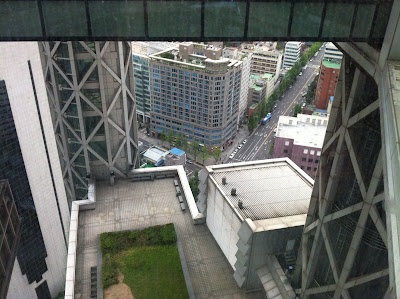 It's not a particularly tall building--33 floors is, well, rather short compared to some skyscrapers...but I just love the quirkiness of the daring structure. 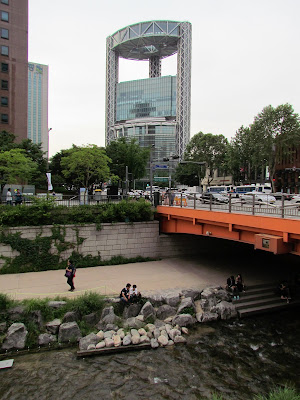 And nearby is Chongye-gye-cheon,
the 'daylighted stream' I mentioned the other day.
It's truly a treasure in the middle of the city.
And when the workers were 'unearthing' it
after demolishing the elevated freeway,
they also rediscovered a 600-yr-old stone bridge: 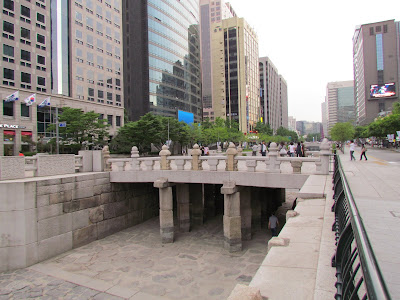 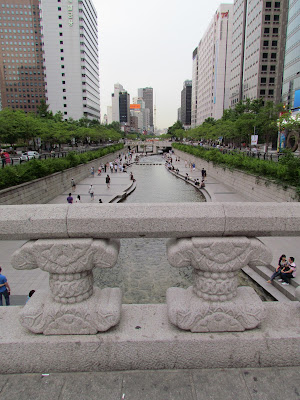 Green space in the middle of a city--perfect for strolling... 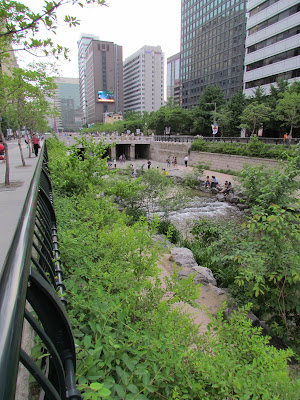 ...and back to Kwanghwamun Plaza, just in time to see kids playing in the lighted fountain around the statue of Admiral Yi Sun-Shin: 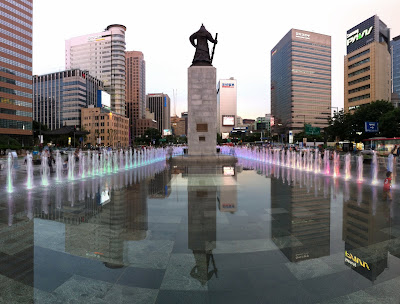 (Perhaps Korea's most famous military hero, Yi Sun-shin invented the world's first iron-clad warships in order to defeat the more numerous Japanese in the wars of the 1590's; the Japanese were attempting to overtake Korea in order to invade China...they were defeated, although they took scores of Korean potters back to Japan as captives. In fact, the war is sometimes called the Pottery war! A bit over 300 years later, Japan would finally succeed, as Korea and Manchuria were absorbed into the Japanese empire until the end of WWII...)

As it got dark, I decided that I needed to put away my iPhone and learn the manual settings on my 'real' camera for nighttime photography. Without a tripod, I couldn't get the truly crisp images, but I had fun experimenting, and I'm not unpleased with the 'student-results:' 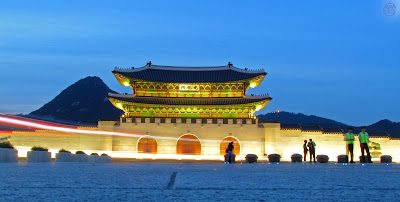 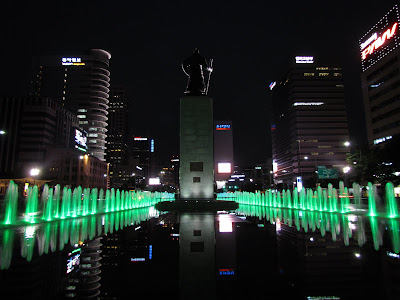 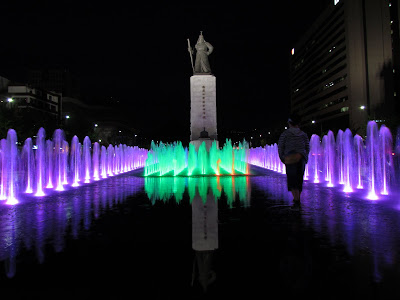 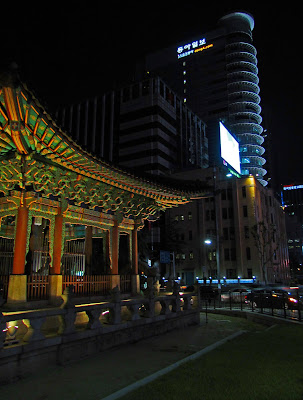 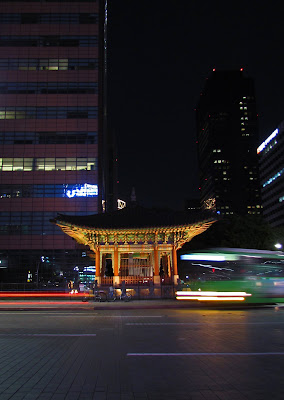 ﻿Time to call it a night.
Tomorrow--across the peninsula, across mountain ranges to seaside Sokcho...
Posted by J. Cyr at 9:27 AM