From medieval market to cosmopolitan comestibles; chic and rustic (scary) rub shoulders in my mother's old stomping grounds, and French connections, in Seoul...
To begin--Getting on the subway this morning, I saw this ad: 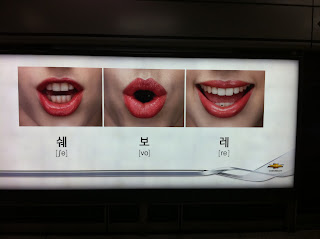 Ahh, phonetics...So crose, yet so far away...
Shevoray is just not quite Sheverlay, is it?
(There are sub-compacts being driven on Korean streets that
Chevrolet is not marketing in the U.S., at least not yet...)
My mother and I thought it would be fun to go back to her old stomping grounds in Seoul, from before she met my father: Namdaemun market and the intersection near the old Bank of Korea and the Shinsegae department stores--venerable institutions housed in stone buildings from the Japanese colonial building (1910-1935).

Namdaemun market has been around as long as "Namdaemun," the old south gate of the city, built in the 1390's...Today the market is a multi-block area of multistory buildings and chaotic alleyways where EVERYTHING can be found--socks, hats, cellphones, blankets, stationery, underwear, plastic dishes, ceramics, straw baskets, silk flowers, and of course--street food: 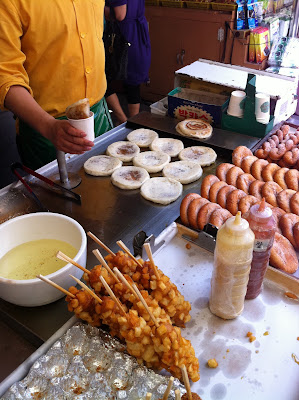 On the griddle are traditional 'hoht-dohk'--brown sugar, sesame, and cinnamon-filled 'pancakes',
and then in the foreground, those scary things on chopsticks are ingenious, if not 'native' to Korea--
they are hot-dogs covered in French-fries!
Why don't we have these in America?!
The chaos is invigorating...

...and there are plenty of colorful characters,
like this vendor who wants to make sure he's seen AND heard: 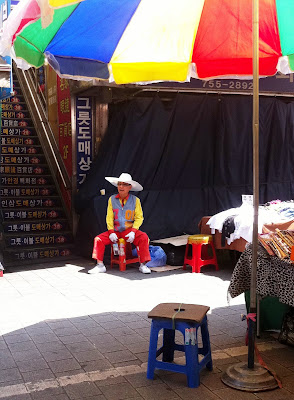 ...out of the alleyways and onto the main avenue--
some of the market activity spills out onto the sidewalks;
below you can see buckwheat-hull-filled pillows...
and in the background, the stately old Bank of Korea building,
built in 1912; my mother worked here for over seven years,
up until a few months before I was born: 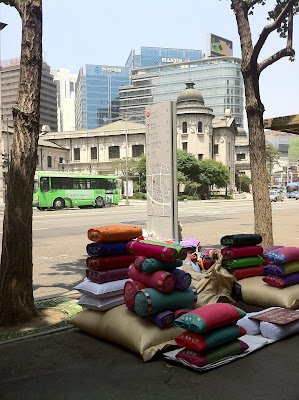 She would get off work and wait on the street, right here,
for my father to come pick her up in his Ford--
quite the sight in 1970's Korea...
And here's the view from the second-floor of the building; 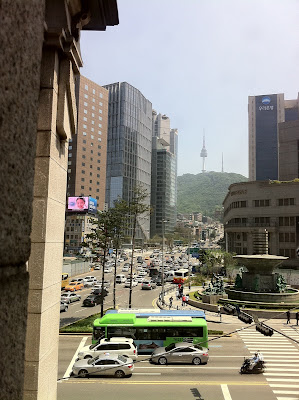 ...looking toward the slopes of Namsan mountain, topped with its landmark tower; the top is over 1500 ft. above sea level--the highest observation deck in the city. When my parents got married, the cable-car to the top had just been built...The top of the observation tower, as well as the secondary tower, are for broadcasting radio and television signals; my father used to work up on the top of the mountain (U.S. military signal) in the 1970's, and up there is where my mother had her first American-style 'barbecue;' she ate hamburger and baked beans along with the mountain-radio-staff--a far cry from the Korean food down below...
Across the street from the old Bank building is the Shinsegae Department Store, Seoul's oldest Western-style department store, in business since 1930; it's the "Harrod's" or "Printemps" of Seoul...and from the roof-garden there's this view of the new twin-towers of the National Post Office: 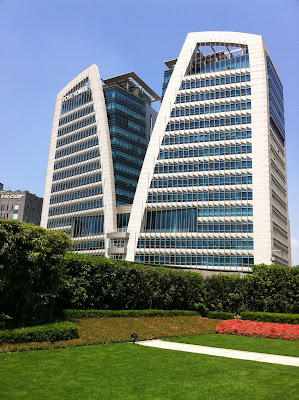 Inside the store, behind the electronic rice cookers,
are some of the new ultra-thin HD televisions that Samsung
is coming out with--this one was showing "Avatar;"
the half-inch-thick screen is a '3-d' tv that does NOT require special goggles.
I'm not really into TVs, but....this one would be way cool to have... 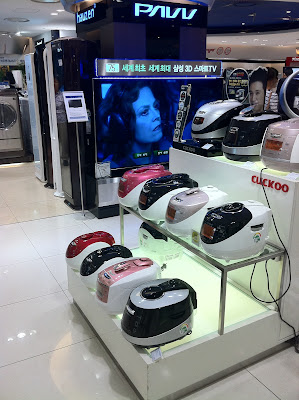 So, I mention "French connections;" here's an example, from around the corner from Shinsegae: 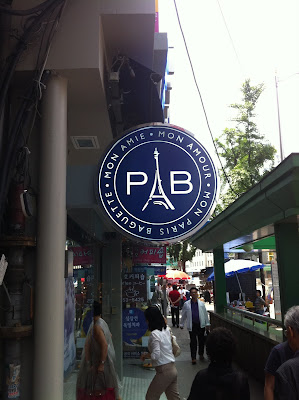 "Paris Baguette" is a darn-good chain of bakeries all around Seoul...
A few doors down is "Tous les Jours," another French-bakery chain in Seoul...
...and then, down in the amazing food halls of the basement of Shinsegae: 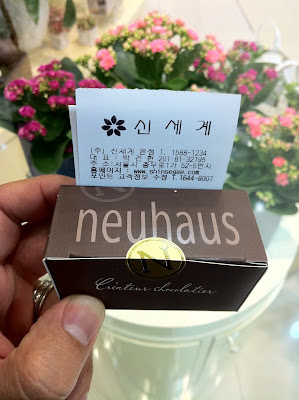 NEUHAUS!!!!! from Bruxelles, Belgique--
BEST
CHOCOLATE
IN
THE
WORLD.
And available in Seoul!
They used to have a little boutique in Seattle...which, alas, closed...
But Seoul?! Wow.
Okay.
So, now, not-so-French: 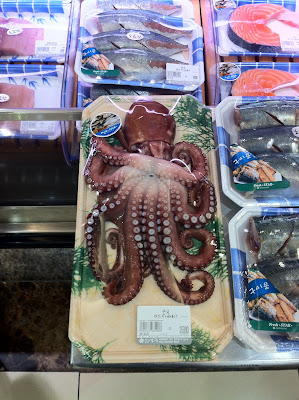 The Food Halls of Shinsegae are a delight, because everything is so
tidy and beautifully presented--very posh--and the juxtaposition between
Western foods and 'scary' Korean foods: fun.
Also, the store is generous with samples--
it's a great place for a tourist to get free snacks in air-conditioned comfort in downtown Seoul. (Be decently dressed, though...)
Back to something French, now: macarons... 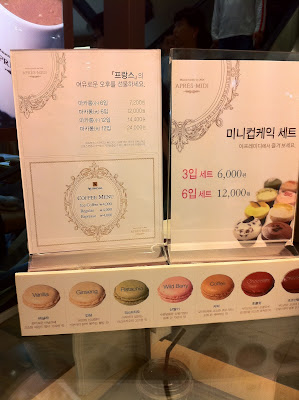 When I lived in Paris, I was introduced to these--they're addictive.
Now they're common enough in big city bakeries in the States,
but ten years ago, most Americans had never had a French macaron...
Here in Seoul--they're EVERYWHERE--a costly item;
a chic treat--to be given as gifts...
and they've been adapted to local taste--if you can see in the
photo above, there's a ginseng-flavored-macaron.
Nice.
Back to Asian food-esthetic: Be-ribboned fruit--suitable for gifting--but, really?--25 dollars for a 'perfect specimen' of watermelon or canteloupe? Over a hundred bucks for a fruit-basket!? Wow. Shinsegae
is definitely for the deep-of-pocket: 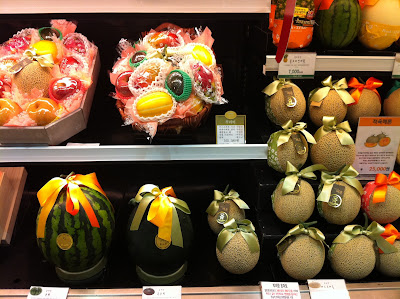 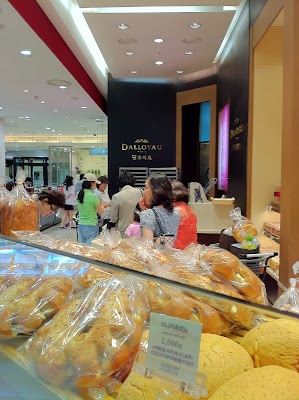 I couldn't believe it...This city has become so cosmopolitan in the past twenty years...When my mother was a little girl, the city was still in rubble, isolated from most things international...and now it's got Dalloyau down in the basement. Man...

From France back to Korea--just a few yards away in the store; check out these furiously red, garlicky banchan ('side-dishes') selections in one of the deli-cases: 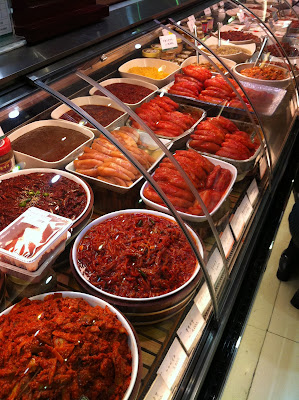 My mother thoroughly enjoyed the atmosphere...it was also good to rest her feet and legs...
Just month-and-a-half ago, she had knee surgery...the walking around the city here is part of her therapy.

And, then, as evening approached, we took the cable car up the mountain: 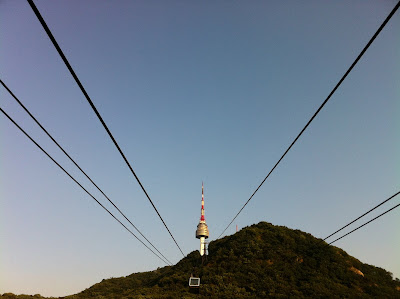 I didn't go up the observation tower, but the view from the tower's base on the mountain's summit is impressive enough...but I don't have those photos tonight; I've yet to download them from the camera.
(All of these are from the iPhone...)
But here's a quick videoclip of the ride down the mountain,
to give you an idea of the terrain of Seoul:

Finally, I convinced mom that we should take a taxi back to our hotel, instead of taking the subway, which would involve a transfer and lots of stairs...(her legs were done for the day)...
and around the corner from the hotel, a hole-in-the-wall eatery, where we had this: 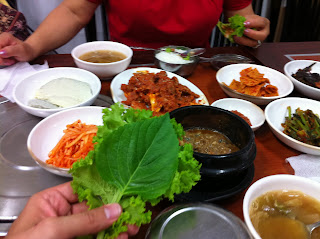 spicy marinated pork, wrapped in lettuce and perilla leaves
with rice and various spicy sauces and vegetable 'pickles.'
That's a wrap.
...on in the background, hotel TV: "Korea's Got Talent."
Posted by J. Cyr at 7:41 AM