"Baeckeoffe"<--"how do you even pronounce that?" you may wonder...
Well, HERE's how you pronounce it.

Now, WHAT is it? It's a slow-cooked meat-and-potatoes dish (cooked in white wine) from the French/German borderland region of Alsace. Recently, I came across Chef Jean-Georges Vongerichten's recipe for his family's version--it's a fusion twist on a comfort food from his childhood. (You can find it in the cookbook that he and his wife wrote to go along with their PBS series "The Kimchi Chronicles.")

French/German meets Korean--right away I knew that I would have to try it!
So, one night last week, with my Korean mother visiting us, I made it for dinner.

The prep took a bit of time, but then once you've chopped and layered, you just leave it in the oven for a couple of hours or so. The fusion of the kimchi, meat, potatoes, and Riesling--a cross-cultural alchemy of deliciousness! Mom and Wife were pleased. 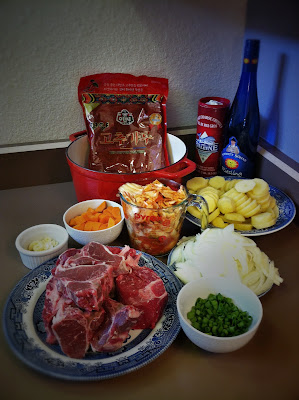 
While the oven is preheating to 400 degrees Fahrenheit,
put about half of the potatoes in the bottom of a baking dish (that has a lid),
sprinkle with some of the coarse salt,
and then place about half of the carrots, green onions, garlic, onion on top... 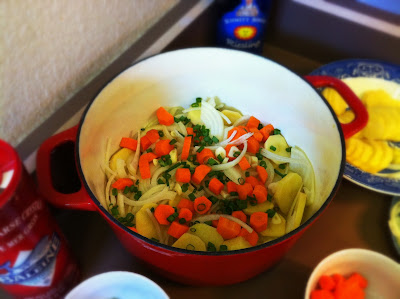 ...and then place about half of the coarsely chopped kimchi on top: 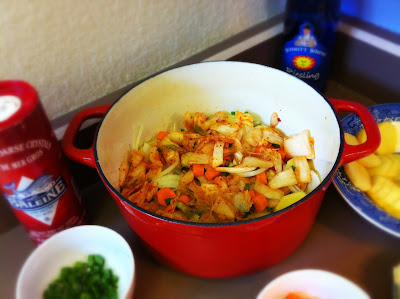 Season the meat with some of the coarse salt and red pepper powder,
(which looks hot, but it won't be overly fiery)
then arrange it on top of the kimchi. 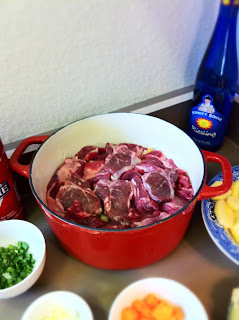 Cover the meat with a layer of the remaining potatoes,
carrots, scallions, garlic, and kimchi,
and then for the finishing touch,
pour the Riesling into the baking dish,
just covering the meat and vegetables.
You may or may not, depending on the shape of your baking dish
and the density with which you pack it,
need the entire bottle of wine;
I used it all: 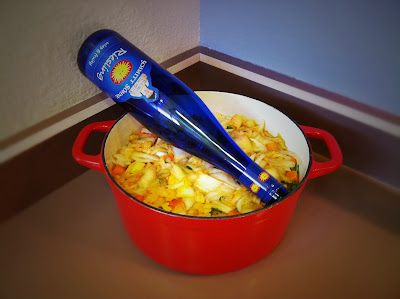 Cover the dish and bake for 2 1/2 hours at 400 degrees,
checking every now and then to see how the level of liquid is doing.
If it dries out, add a splash more wine or water.
(I didn't need to add much.)
Cook until the vegetables are soft and the meat is tender.
When you take it out of the oven, it will look something like this: 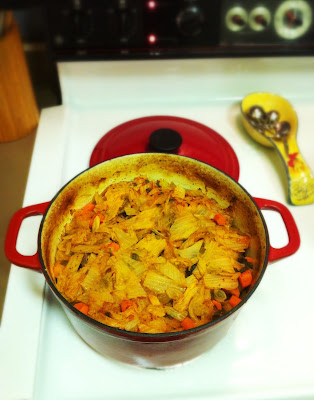 Voilà--fini!
(You'll have enough to serve four to five people.)
Serve hot in soup plates with the liquid;
This "Korean Baeckoffe" is a hearty yet not heavy stew: 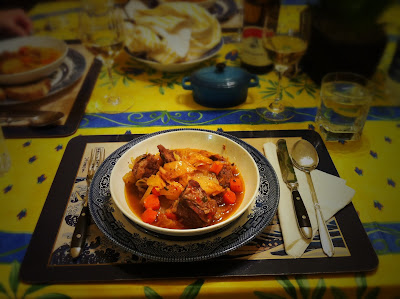 Have you heard of the newest viral YouTube video?
It's "Que difícil es hablar el español"
For an explanation in English, click here.