"Black and White" for this Monday's #travelpics...and the Sonoran Desert's "Second Spring"

Another summer has come and gone...
Tomorrow is the first official day of Autumn...AND it's Monday.

Keep your wanderlust alive, though, by signing on for the weekly #travelpics chat on twitter, hosted by Kathryn Cooper a.k.a. @AntiTourist and her co-hosts @sihpromatum, @TheTravelCamel, @VibrantIreland, and @travellingmolly... Check in at 3 p.m. ET/ noon on the West Coast.

This week's theme will be "black and white" in travel photography...

...which got me thinking back to when I first began thinking about taking black-and-white photos. It was during the year I lived in Paris; all I had, in those pre-digital-camera days, on my grad-school budget was a point-and-shoot...The Monoprix supermarket around the corner from where I lived had a kiosk where I would drop off my rolls of film, hoping for scenes to turn out. Few cities are as photographically documented as Paris, but even so, I was anxious to get a few shots that would be "MINE" and not just some postcard.

One winter morning, then, from the roof of the Printemps department store:

During that winter, I spent a week-and-a-half down in Barcelona,
thinking about my father who had died only a year-and-a-half before.
he'd spent quite a bit of time in Spain before he met my mother;
I ended up chasing his ghost around the city.
This wall in the Barri Gòtic got me thinking about all that gets embedded in a place,
all that gets embedded in us as we travel... 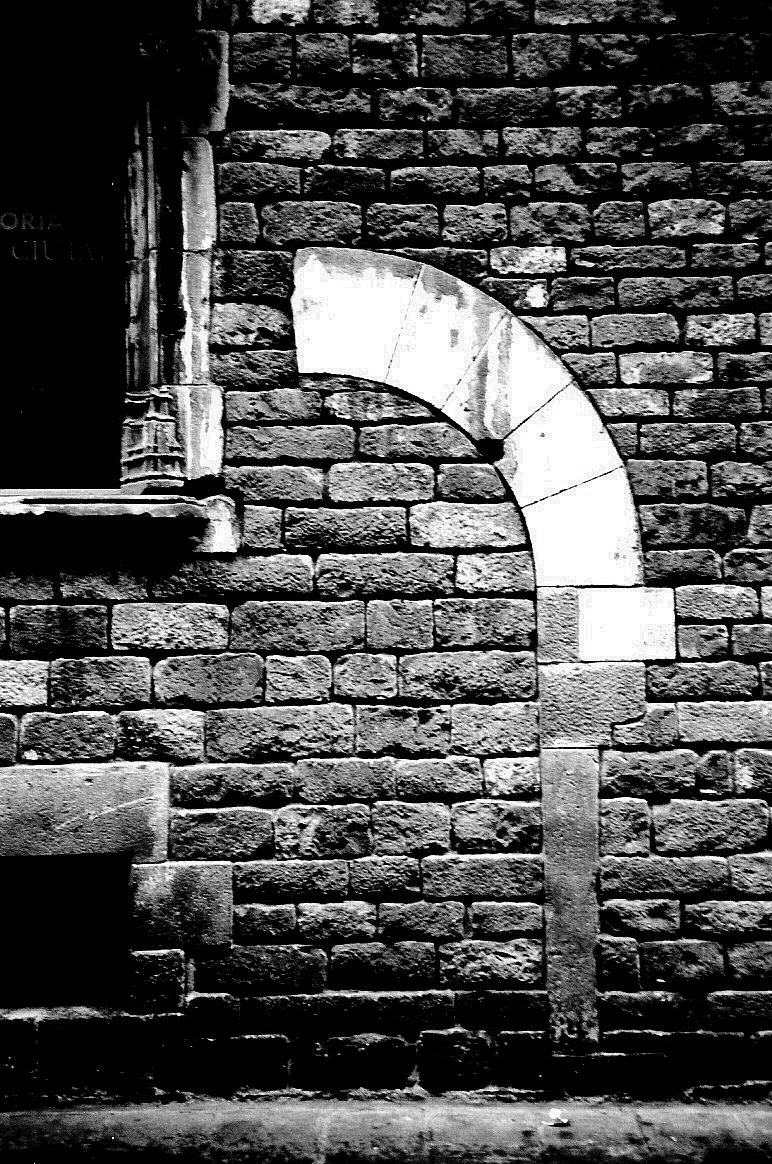 Another wall, several years later, far from Spain--
one of the finest examples of Inca stonework:
the twelve-angled stone in Cuzco, Perú.
No metal tools, no mortar.
Centuries of earthquakes haven't toppled this wall;
the masonry is so well-fitted that even today,
not even a sheet of paper will fit between the stones. 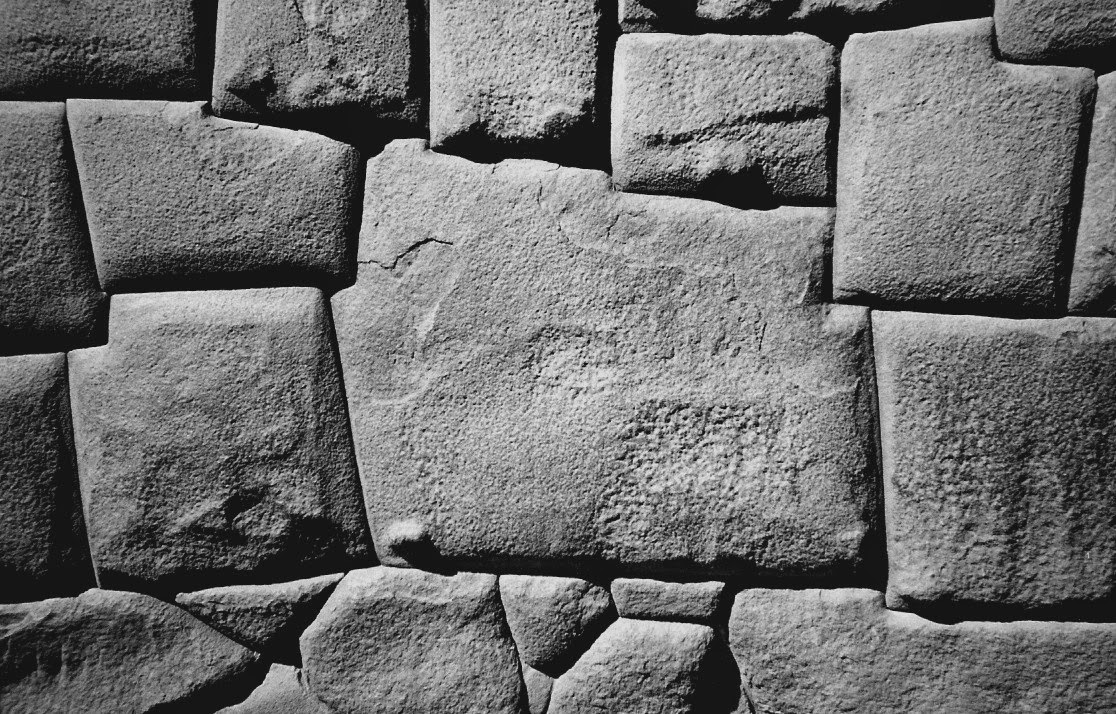 When shape and texture alone are what you want to capture in an image,
color becomes a distraction.

Moving to Arizona seven years ago, we couldn't get enough of the iconic saguaros. I've since calmed down a bit, taking fewer cactus pics, but here's one of my favorites from our first hike in Saguaro National Park. 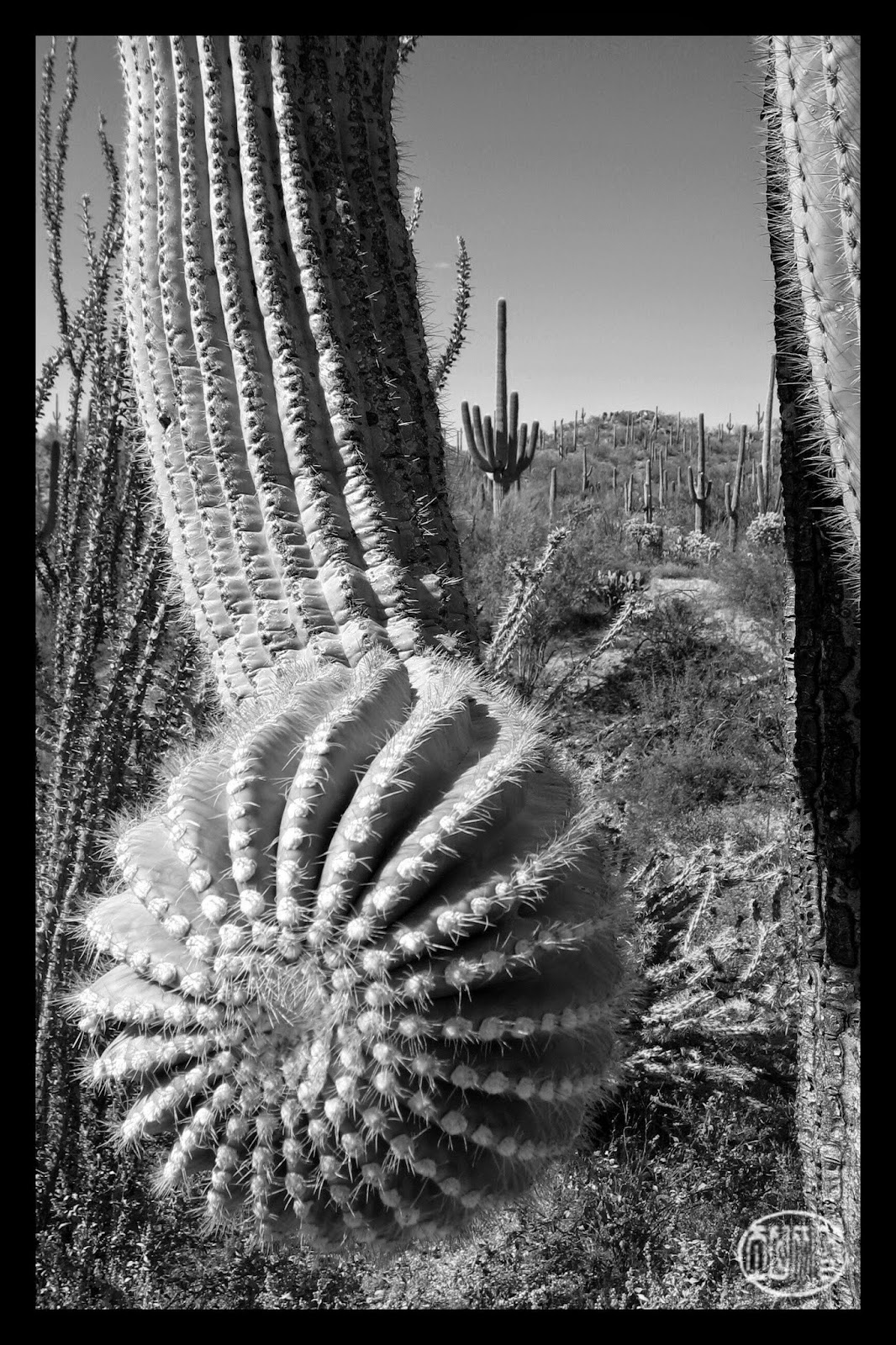 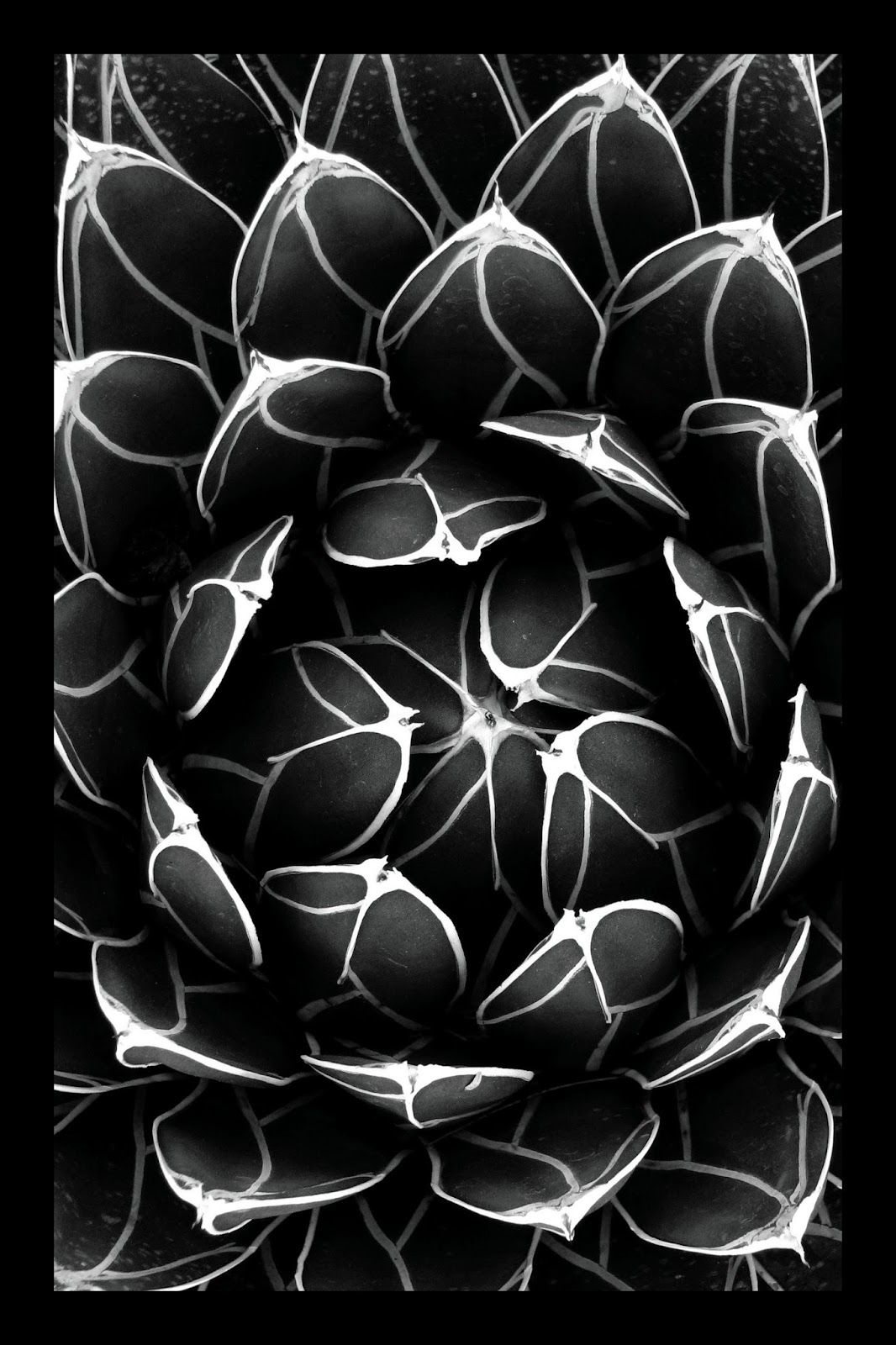 Back to France and architecture--
last summer my wife and I finally made it to the Château de Chenonceau.
It's one of the most photographed sights in Europe, with its arches over the River Cher. Don't make the mistake of passing it by, thinking that it would just be better to avoid the crowds by going to some other castle. Come here mid-week, in the late afternoon, when the big tour-bus-groups begin to leave. You'll have the Renaissance galleries and gardens almost to yourself if you stay until closing time. 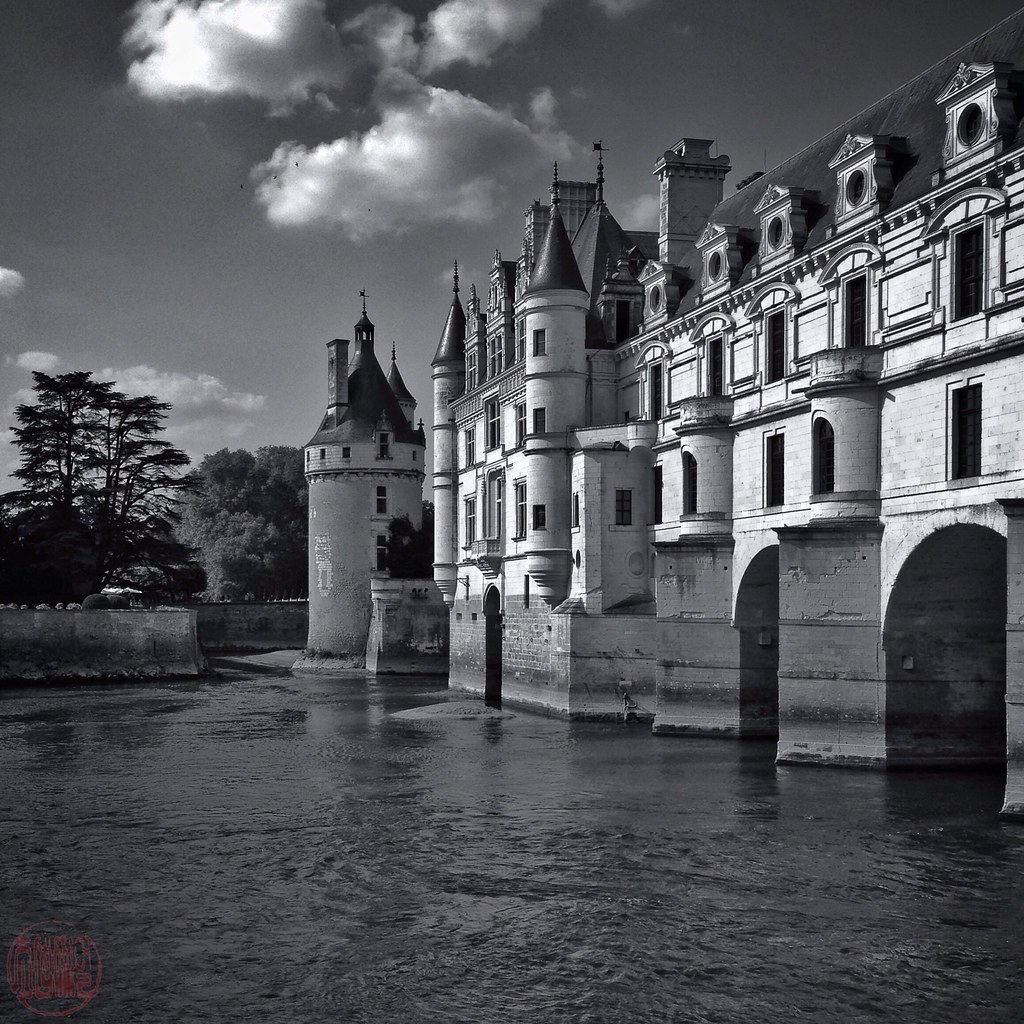 (and, incidentally, all the rest of these are iPhone-photos) 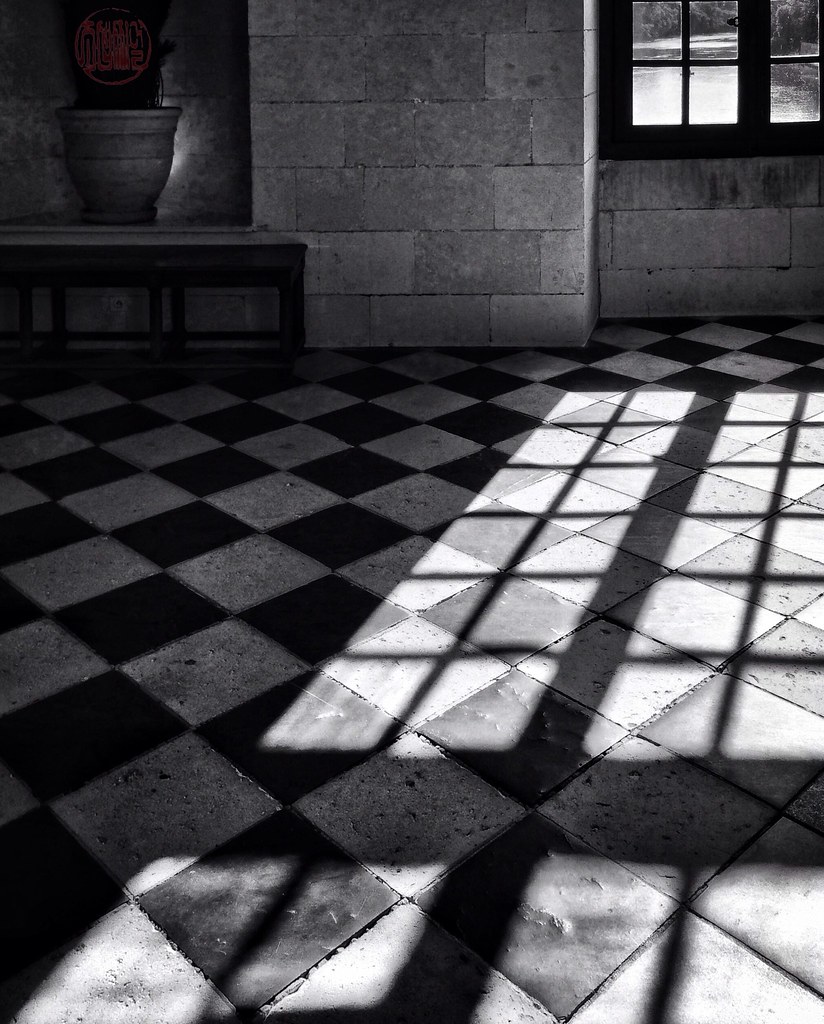 Still in France, to the Southwest, now,
in the Tower of the Château de Montaigne... 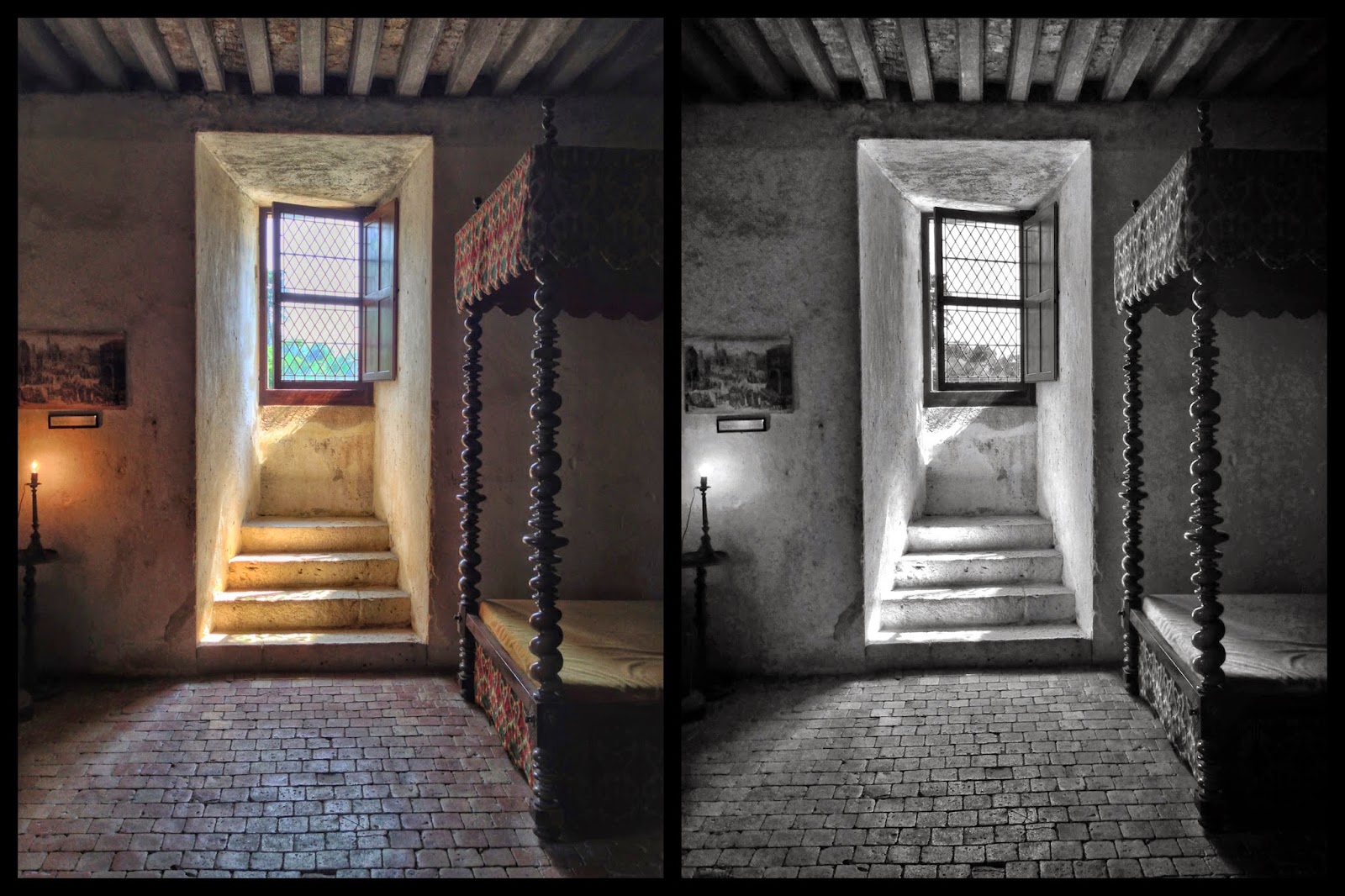 ...the residence of the famed Renaissance man Michel de Montaigne, who, in some ways, can be considered Europe's first 'modern' writer, inventor of the essay and a 'blogger' before his time. During the year I lived in France as a grad-student, I'd never had the chance to make my way down to this part of France; it was a delight to wander around the vineyard-covered landscape.

Montaigne (1533-1592) spent the last years of his life in the circular tower of his family's château, converting its different levels into his chapel, library, study, and bedroom. He wrote all of his "Essais" here, in semi-retirement after years of public service and traveling. While my visit was not exactly a 'literary pilgrimmage,' being in this tower, in the rooms where so many thoughts were carefully crafted so long ago--it was sobering.

Thinking about the ability of photography to capture a moment and render it timeless, this passage from Montaigne comes to mind:
"The utility of living consists not in the length of days, but in the use of time; a man may have lived long, and yet lived but a little. Make use of time while it is present with you. It depends upon your will, and not upon the number of days, to have a sufficient length of life."

Back to the Southwest US,
a streetscape in Santa Fe: 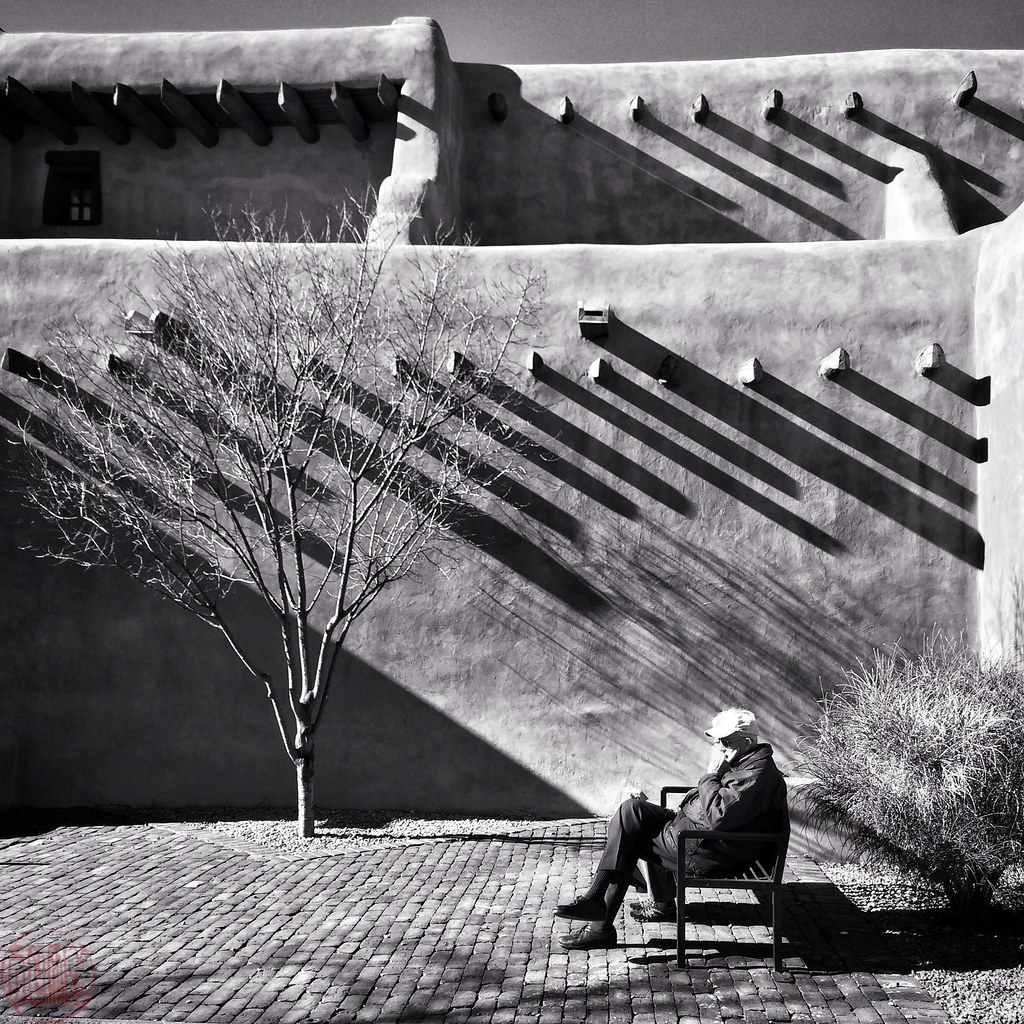 Again, a wall...shape, texture, and shadow at play...black-and-white is the way to go...

A scene from earlier this summer--an oasis on the outskirts of Tucson drying out: 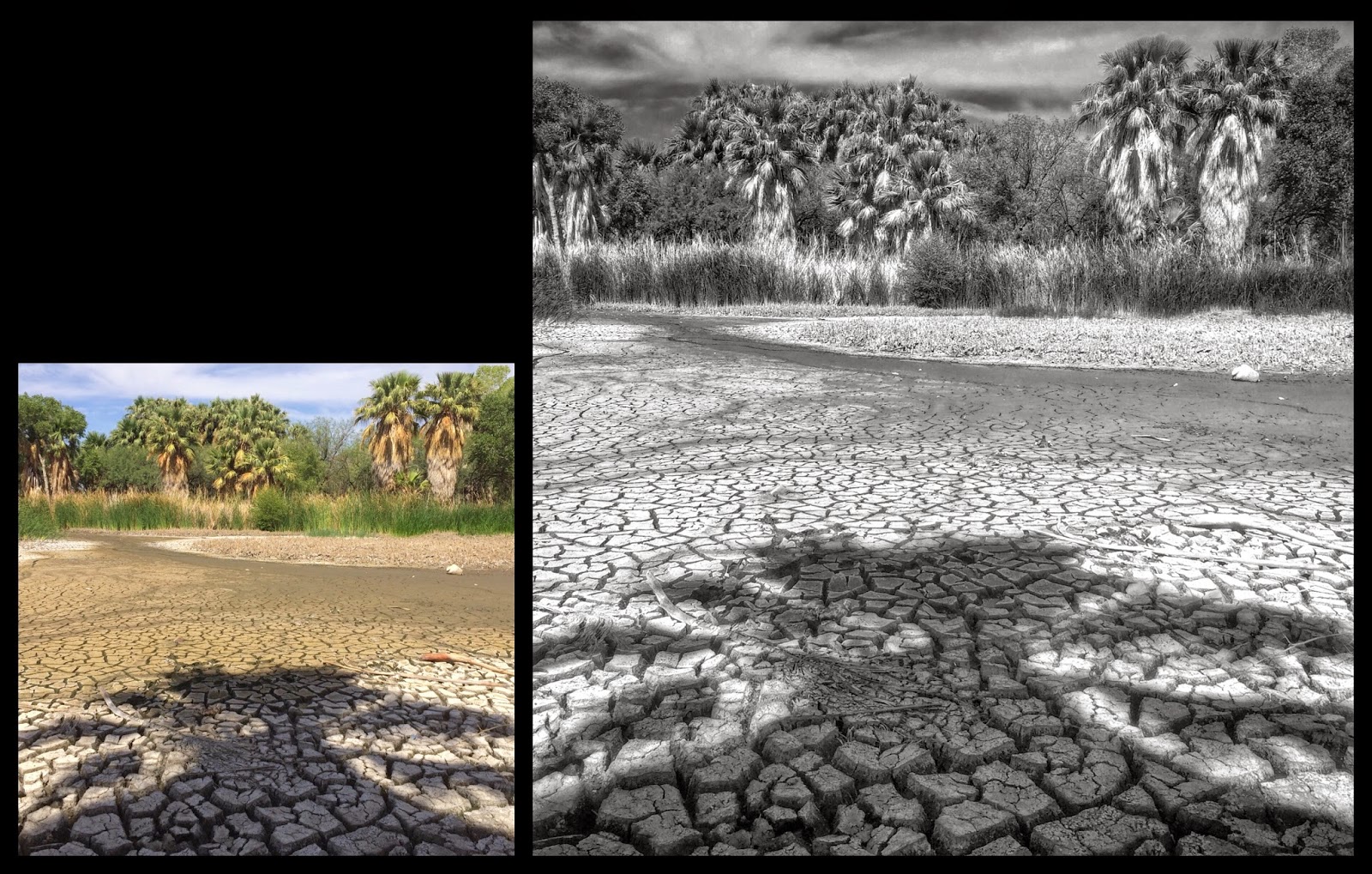 No shortage of water here,
flowing in the Jeonju River in S. Korea this past June: 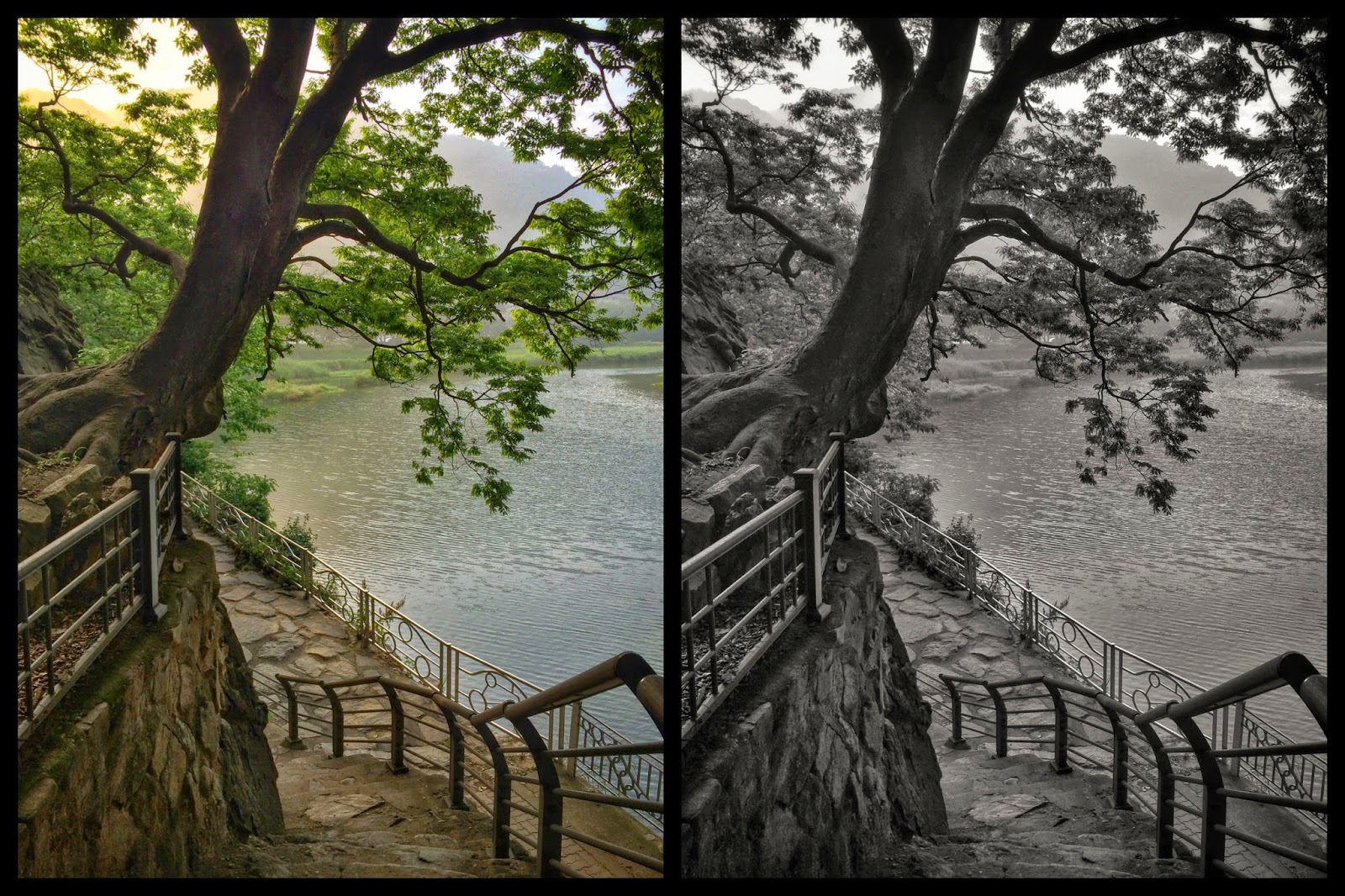 ...and from Jeonju up to Seoul,
for this view of Zaha Hadid's recently completed Dongdaemun Design Plaza: 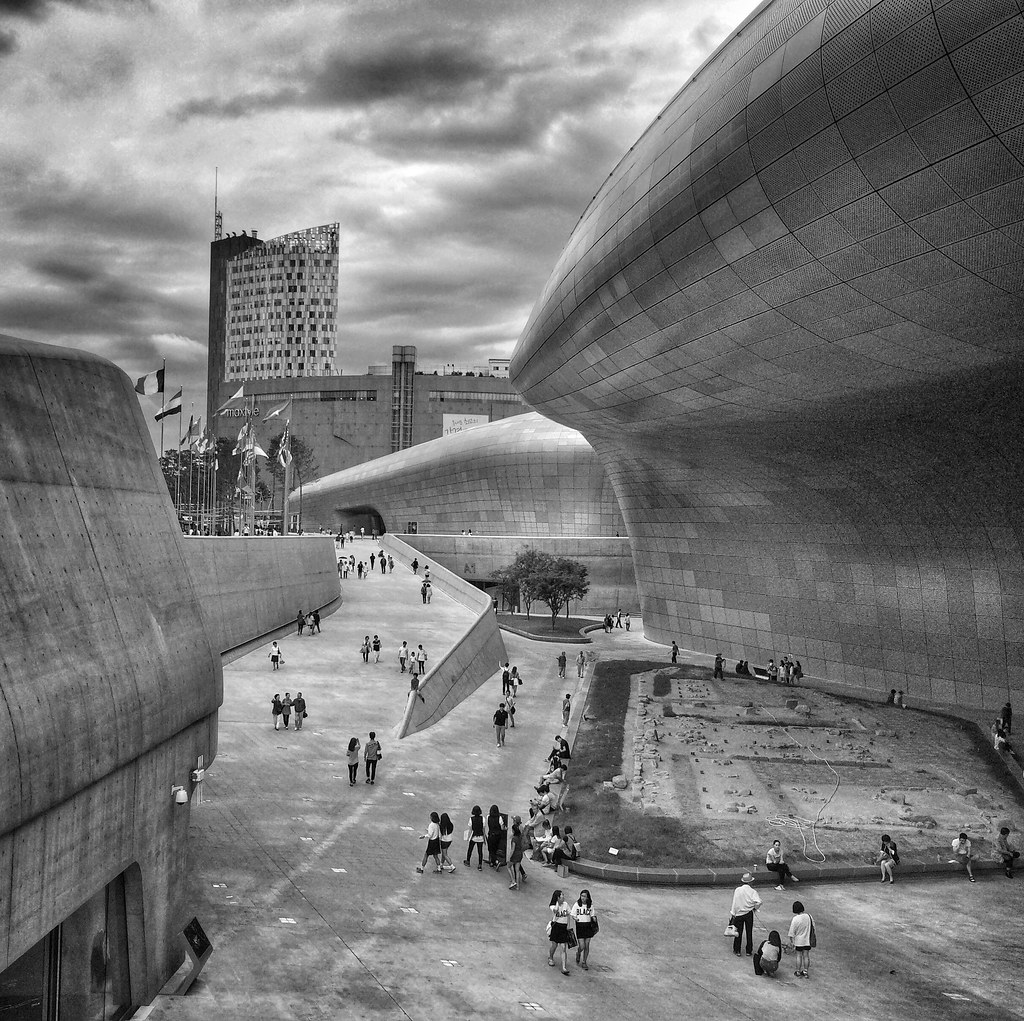 ...and some of the not-so-spiral stairs inside: 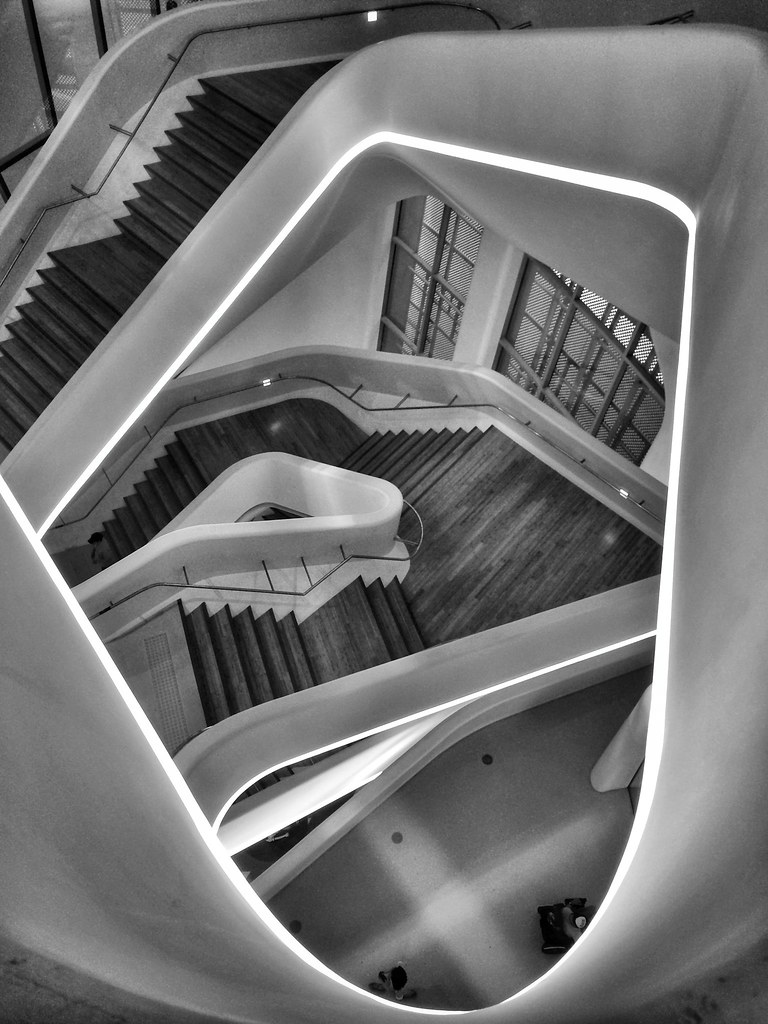 For some more architecture-and-people,
this scene from the Jardin des Tuileries in Paris: Talking intently on his cell-phone, on a sunny lunch-break, after a long grey spring--the ups and downs of living and working in the French capital...

And some outdoor cooking, in front of the XVIIIth-c. Mission San Xavier del Bac, just outside of Tucson: 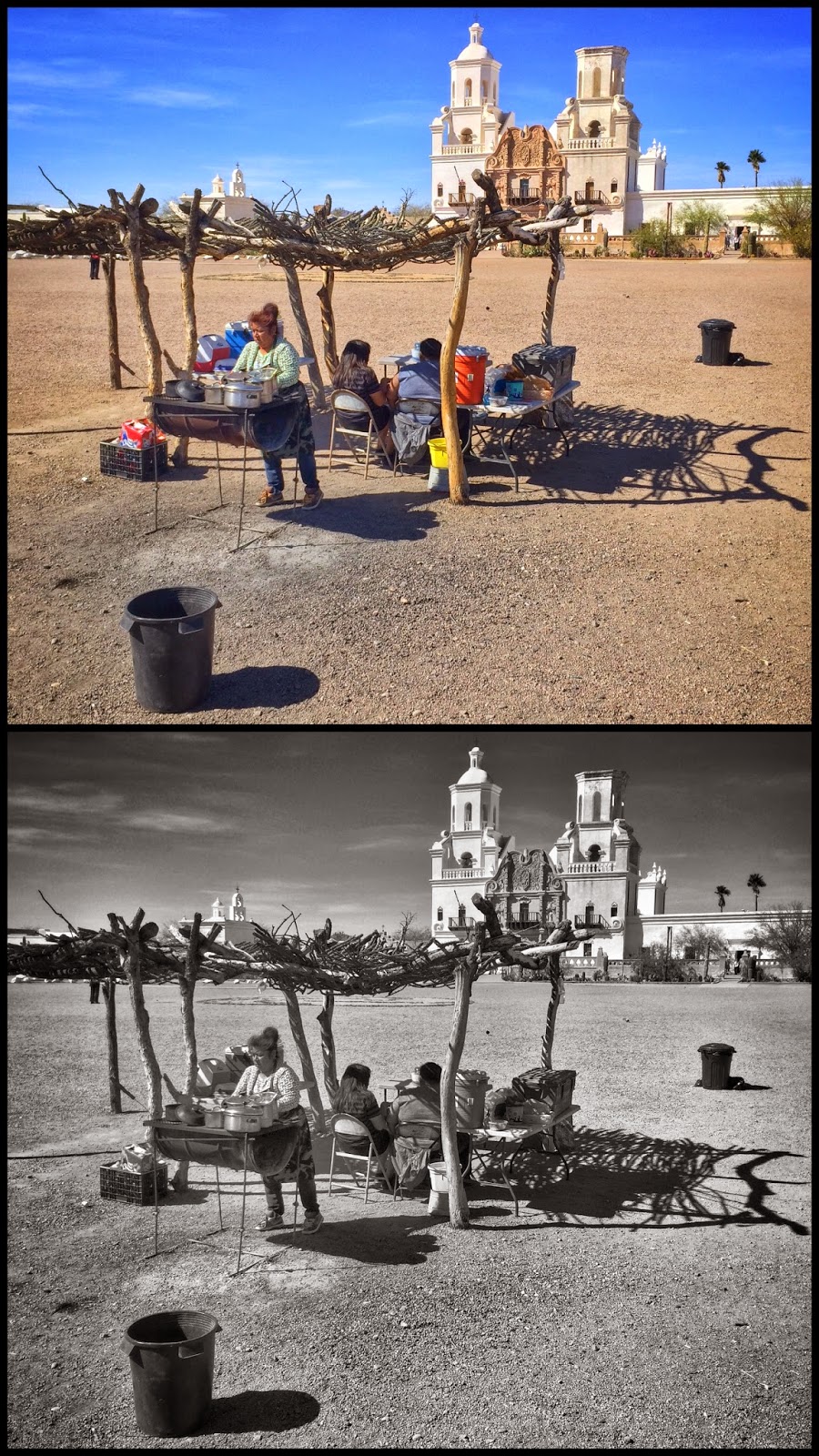 And finally, to the Grand Canyon State's namesake landscape: 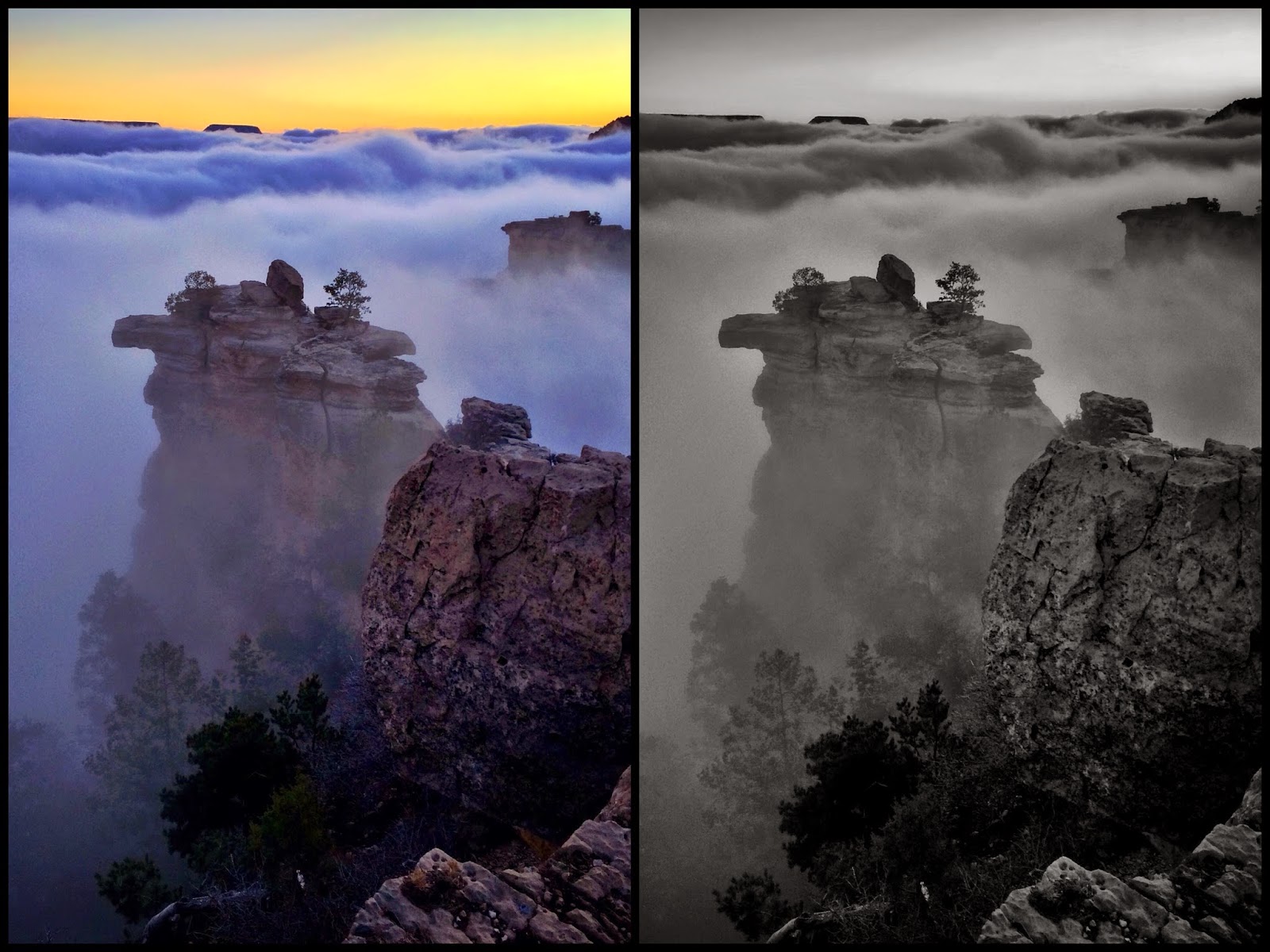 Last November, I spent a couple of days here; I hadn't been in a few years, and I also had a little bit of fact-finding to do for a project I was working on. In the past, the timing hadn't worked out to see sunset or sunrise over the vast chasm, so I made sure to include time for that on this trip. As I arrived at dawn and made my way to the edge of the South Rim, I saw that the canyon was filled with a sea of fog--I didn't learn until later that it was a rare inversion, a climatic phenomenon that only occurs once a decade or so in the Grand Canyon--definitely a privileged moment! I meant to take some photos of the sunrise and the morning light spilling into the gorges below, but instead, the play of light and fog ended up stealing the show.


I took this particular photo just a few minutes after arriving. While the sunrise a half-hour later was indeed spectacular, this shot ended up being one of my favorites. This particular tree-topped outcropping, disappearing into the roiling mist reminded me of Chinese scroll paintings and landscapes I had hiked in while in the mountains of Korea, so I decided to take a vertical shot, including just enough of the dawn sky for color, but focusing on the rocky profile and trees disappearing into the fog, masking the canyon-floor a mile below. I'm sure there must have been some visitors who were disappointed because they couldn't see into the canyon on this particular morning, but for me, watching the waves of fog in the quiet cold--it's one of the most spectacular landscape-moments I've ever seen...

...and in this morning's Sunday newspaper, I woke up to this: 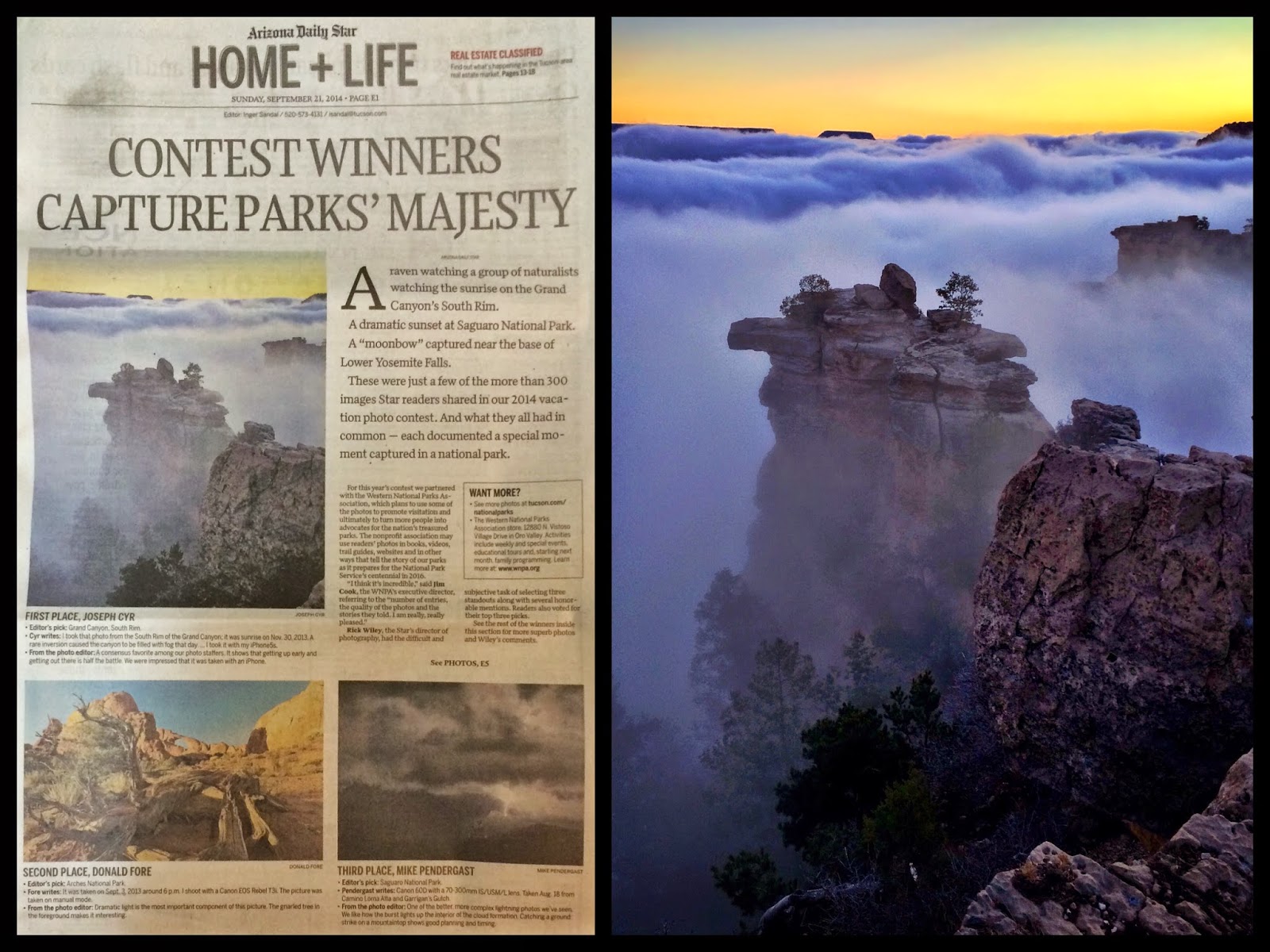 This photo won first place in the Arizona Daily Star/Western National Parks Association photo contest; definitely a nice way to wake up to a weekend morning!

By mid-September, most years, the monsoon begins to dry out here in southern Arizona. The rains have been good in Tucson this year; what locals call 'the Second Spring' is well under way. Wildflowers are blooming again, taking advantage of the moisture and the break from the 100+ degree days. Here are a few scenes from my run along the trail to Bear Canyon this morning... 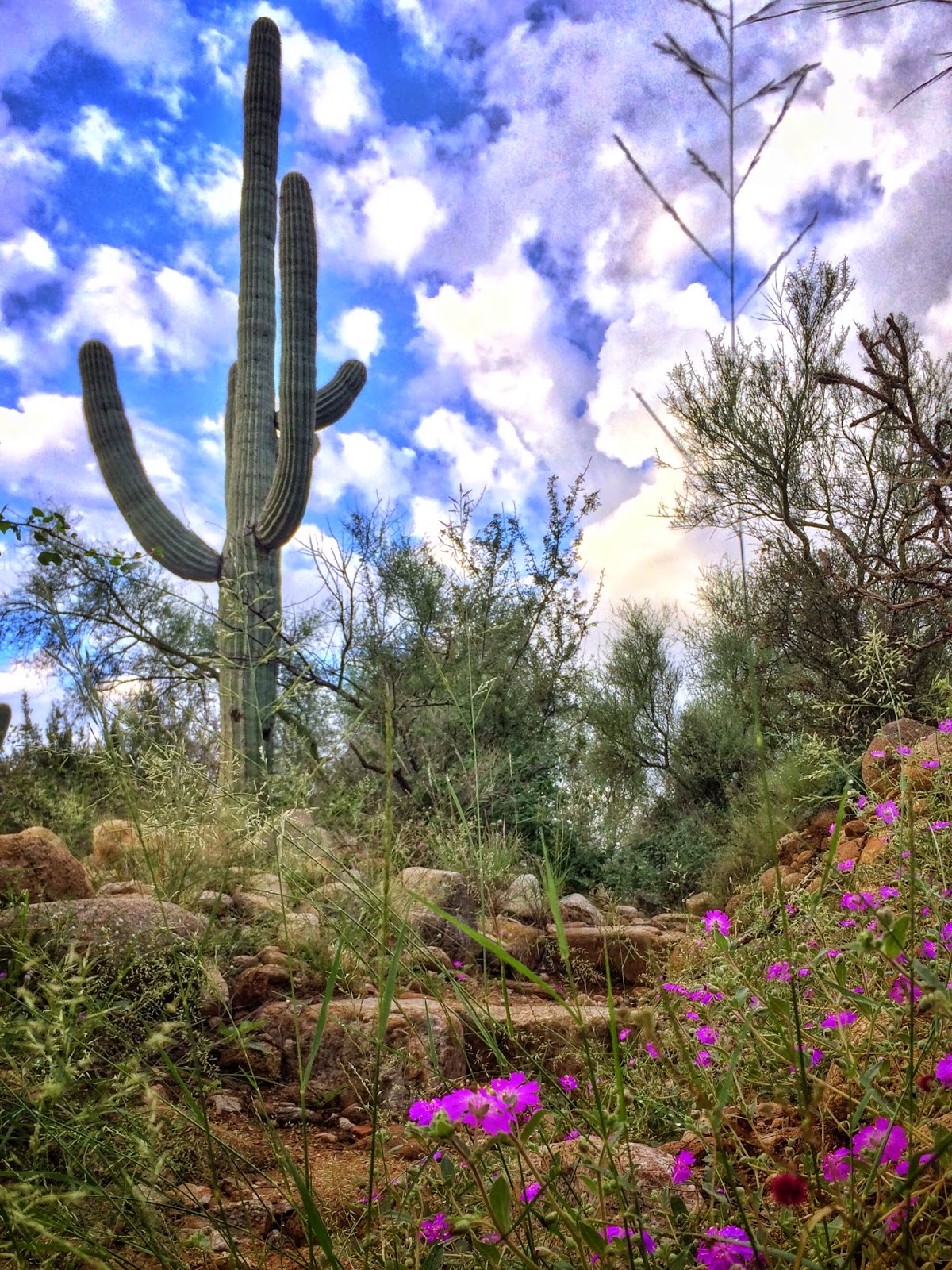 As I ran into Bear Canyon, this guy-on-horseback was sauntering out... 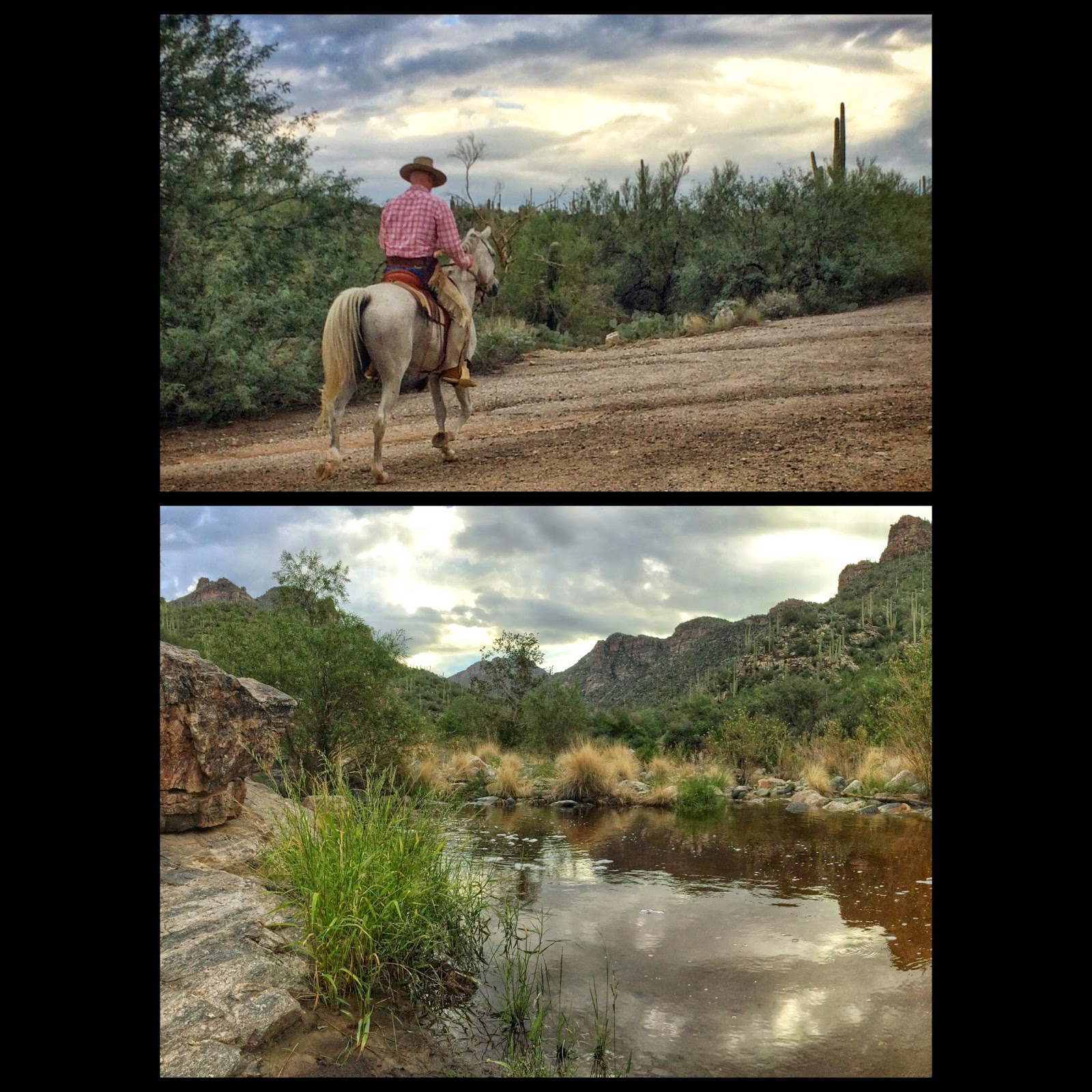 Along the trails, in the flowing washes, some of the wildflowers I saw this morning: 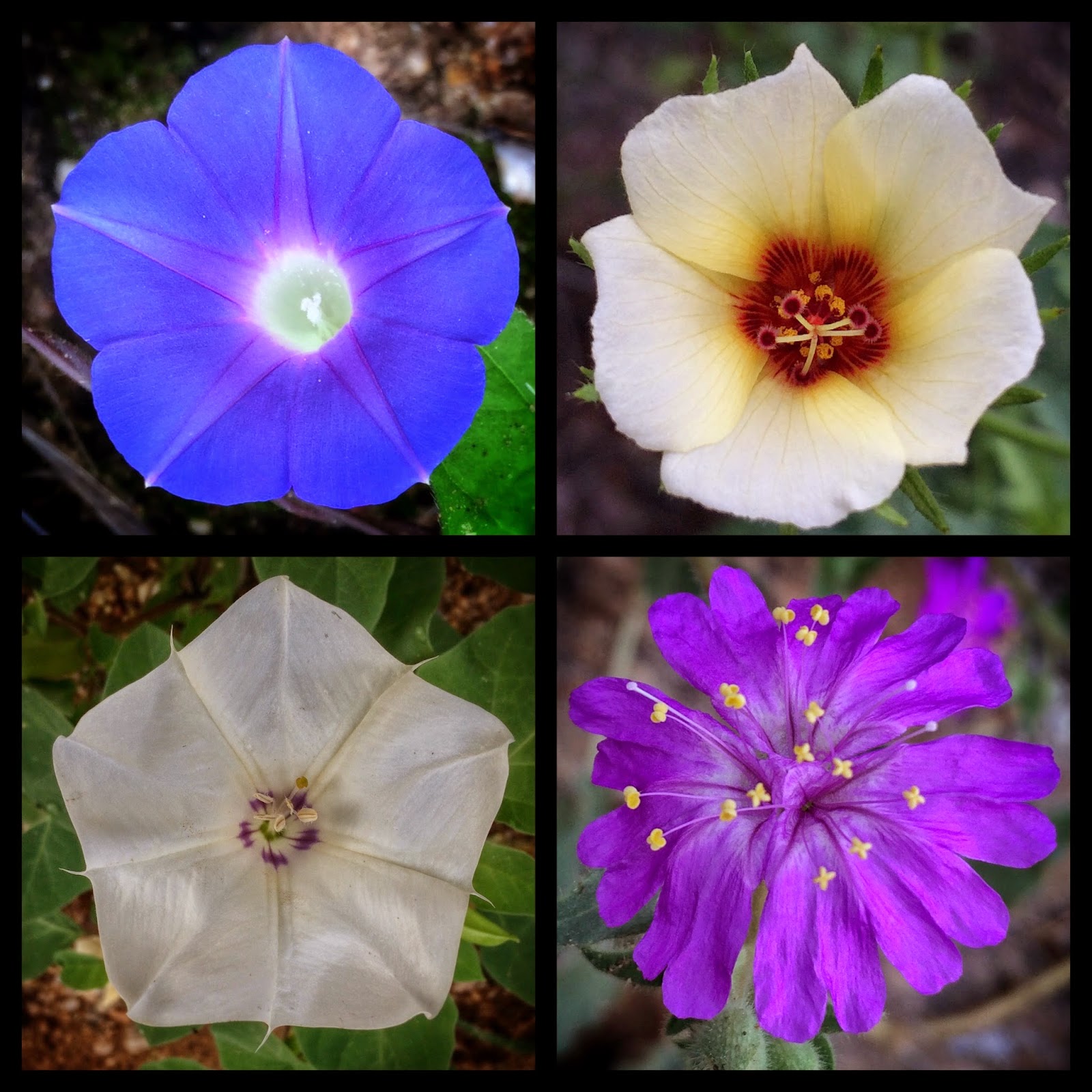 (This website, incidentally,
is one of the best resources for identifying desert plants and blooms.)

An evening scene, from last week:

Technically, there are three distinct 'summers' in the Sonoran desert.
The first hot, dry summer--May-June,
then the rainy monsoon--July through mid-September,
and finally, the post-monsoon summer, which lasts through most of October.

This 'Second Spring' is just the briefly blossoming tail-end of the monsoon...
We'll enjoy it while it lasts.