"You need to hear what I have to say about breakfast wraps!" --while traveling...

"Breakfast wraps?"
Maybe you recall this cartoon from a few years ago: 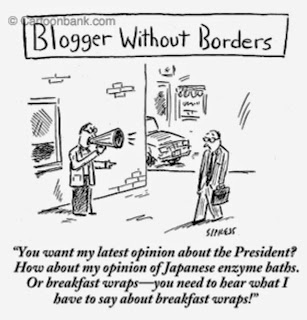 When the New Yorker published this, Twitter hadn't yet taken over as the 'breakfast-wrap-megaphone.' As an increasing number of bloggers have monetized and professionalized, I wonder if the cartoon above is as accurate as it was back in 2007? (Incidentally, for me, now, Twitter is more of a media-sharing platform rather than a social-media-keep-up-with-'friends' tool.)

I do wonder, as I realize that I've been blogging for almost eight years now, what exactly this blog is. It grew out of weekly e-mails during the year we leaved in Nicaragua...

I don't think it's just my breakfast-wrap-megaphone...but it's not frequent or in-depth enough to truly be a 'travel-blog' or a 'teacher's-blog'...and yet I feel compelled to come back to it, at least monthly, to post something... I've always tried to be somewhat guarded on this blog--refraining from the overly personal, thinking that our close friends who read this would know how we're really doing, anyway... Since I joined twitter and instagram--only to keep up with a limited circle of friends--I've felt less of the need to post here...But the limitations of twitter and instagram keep me coming back to the blog...

Travel and change of place
impart new vigor to the mind.
--Seneca

This summer's 'big trip' begins tomorrow:
after three summers away, my wife and I are returning to Korea.

Wanting to travel light, I'm not bringing a laptop this time--just an iPad...and I've come to realize that blogging to this particular blog is somewhat cumbersome from an iPad--text alone would work just fine, but wanting to format text WITH photos--not so user-friendly. (Come on, blogspot folks--you can do better!)

So, for any of you who want to 'hear about--and see--our breakfast wraps' while we'll be traveling, here's where you can go:
http://traveling-allophile.tumblr.com/

I'm not giving up on allophile.com--but for the next month or so, I'll mainly be using tumblr...

Seoul.
It's a city I keep returning to-- 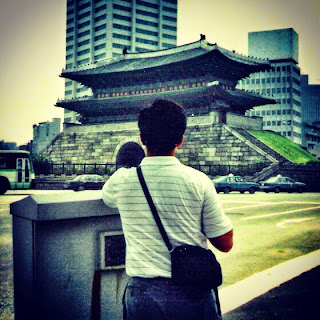 --and not just because I was born there.

I'm a young teen in this photo; an uncle of mine took this of me standing in front of the city's old South Gate--built in the 1390's, it survived centuries of invasions and wars until an arsonist severely damaged it back in 2008. When my wife and I were last in Seoul, an enormous reconstruction-shelter was hiding Namdaemun (officially known as "Sungnyemun"--'mun' meaning 'gate') from view as the restoration continued. In May of last year, it was finally re-opened to the public...can't wait to see it again, twenty-five years after the photo above was taken. And I'll still be wearing a camera-bag...

Sightseeing, though, isn't the main point of this trip.
It's language.
Korean.

My mother's mother-tongue...and yet it was my wife's idea, really, that we should make this trip this year--she wants to get a kick-start in learning Korean, and for me this will be impetus to keep going down the road to fluency...Starting next Monday, then: intensive language classes in the heart of Seoul.

I joke with my wife that she grew up with more Koreans than I ever did; her neighborhood and high-school in suburban Seattle were more like an outpost of Seoul than I ever experienced while growing up in Germany, southern Arizona, and finally in Georgia. True, my mother is Korean, but my father didn't speak the language, so English was our home lingua franca...

A couple of years before we moved to Nicaragua, we took intensive one-on-one language lessons in Antigua, Guatemala--that was my wife's introduction to Spanish, and for her learning-style, it was a perfect beginning. Not long after that, she was easily conversant, and then after we returned from our Central American peregrinations, she took on French. (And, although she won't 'own' this fact, in my professional opinion, she's almost caught up to me, le prof de français!) So, now--time to 'tame' (note, not 'conquer') a non-Indo-European language. Deep breaths...

Syntax and verb-endings will not rule the entire time, though--there will plenty of architectural and culinary exploring over the next few weeks; after our language classes, we'll be traveling around the country...stay tuned. (On the other blog, that is.)

As we leave, this is what Tucson looks like right now;
we'll be leaving the desert just as the last of spring's waters dry up,
waiting for the monsoon to arrive in July: 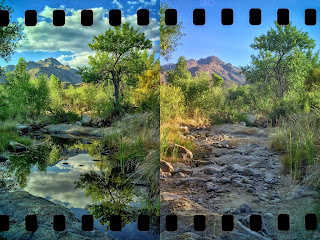 (one of my favorite spots while running--
where Sabino creek exits its canyon on Tucson's NE edge--
seen a month ago, then yesterday...) 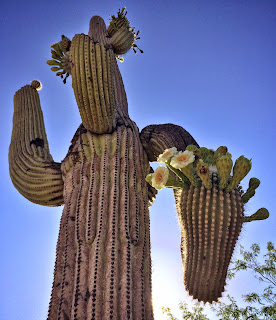 Summer...
Tomorrow's forecast high-temperature: 106.
A fine day to fly away...