After a month of running around Korea...

Today marks two weeks--already?--that I've been back in Tucson.

From late May through most of June, my wife and I were HERE: 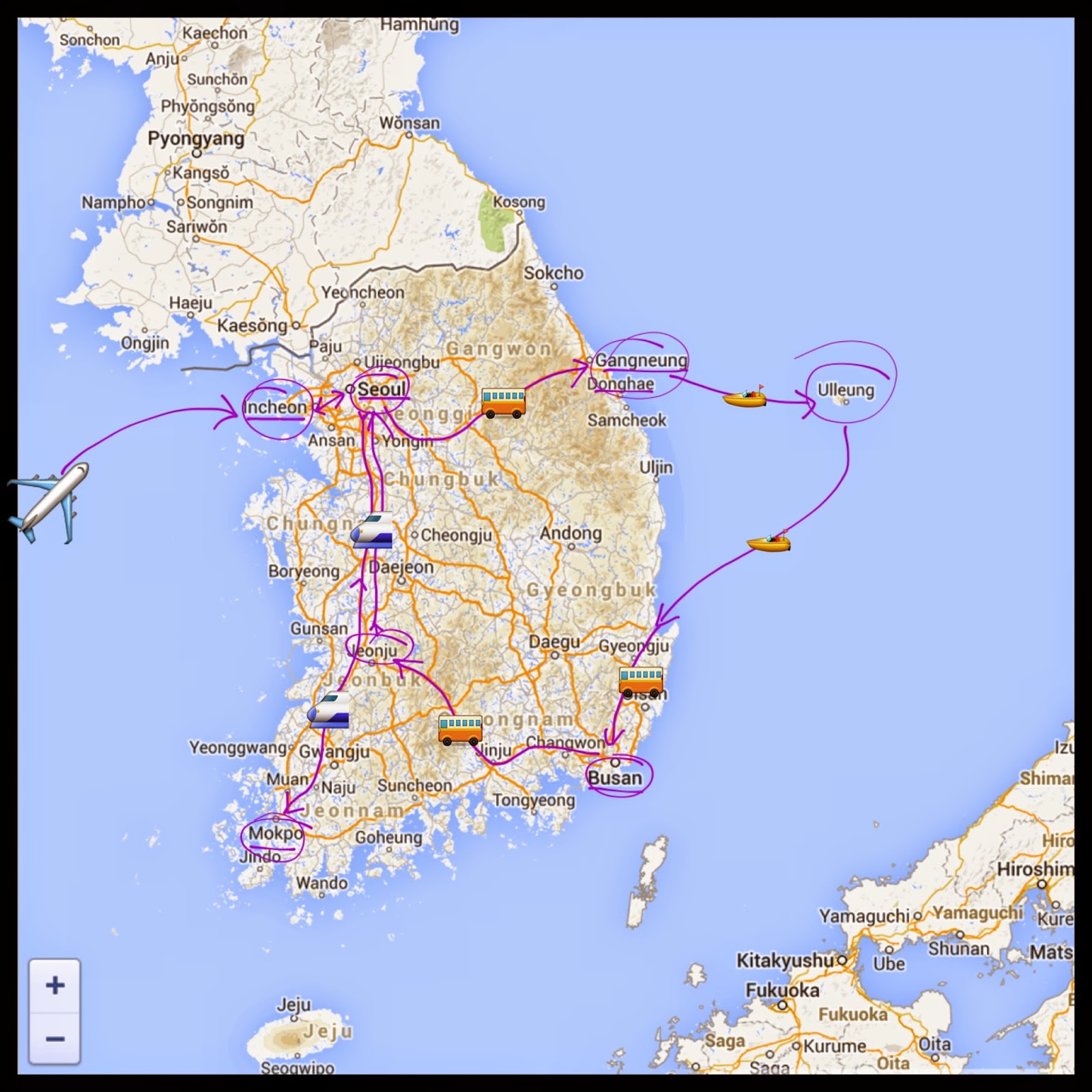 (during the trip, I posted to traveling-allophile.tumblr.com)

It's taken me almost two weeks to get over the wicked East Asia-West Coast US jet-lag...

Finally, I'm sleeping 'normally' enough so that I can wake up and beat the summer desert heat by going for early morning runs...
...and running has become something I make sure to do whenever traveling. Last summer, I took advantage of my jet-lag by going for a long run along the Canal St.-Martin in Paris when I couldn't sleep on my first day back in France. This summer, upon our arrival in Korea, somehow we were able to 'switch' to the local time zone immediately; we flew in late at night, went straight from the airport to a nearby hotel, and the next morning, I found myself running along a saltwater canal in the 'instant city' of Songdo, built on land re-claimed from the sea across the harbor from Incheon airport:

Jet-lag is inevitable, and it might work in your 'favor' or not;
whatever the case--RUN!
It's one of the best ways to get over travel fatigue while at the same time getting the true feet-on-the-ground feel of a place.

Running along the top edge of Seoul's remaining old city wall,
just north of the Bukchon neighborhood,
on the slopes of Bugaksan mountain: 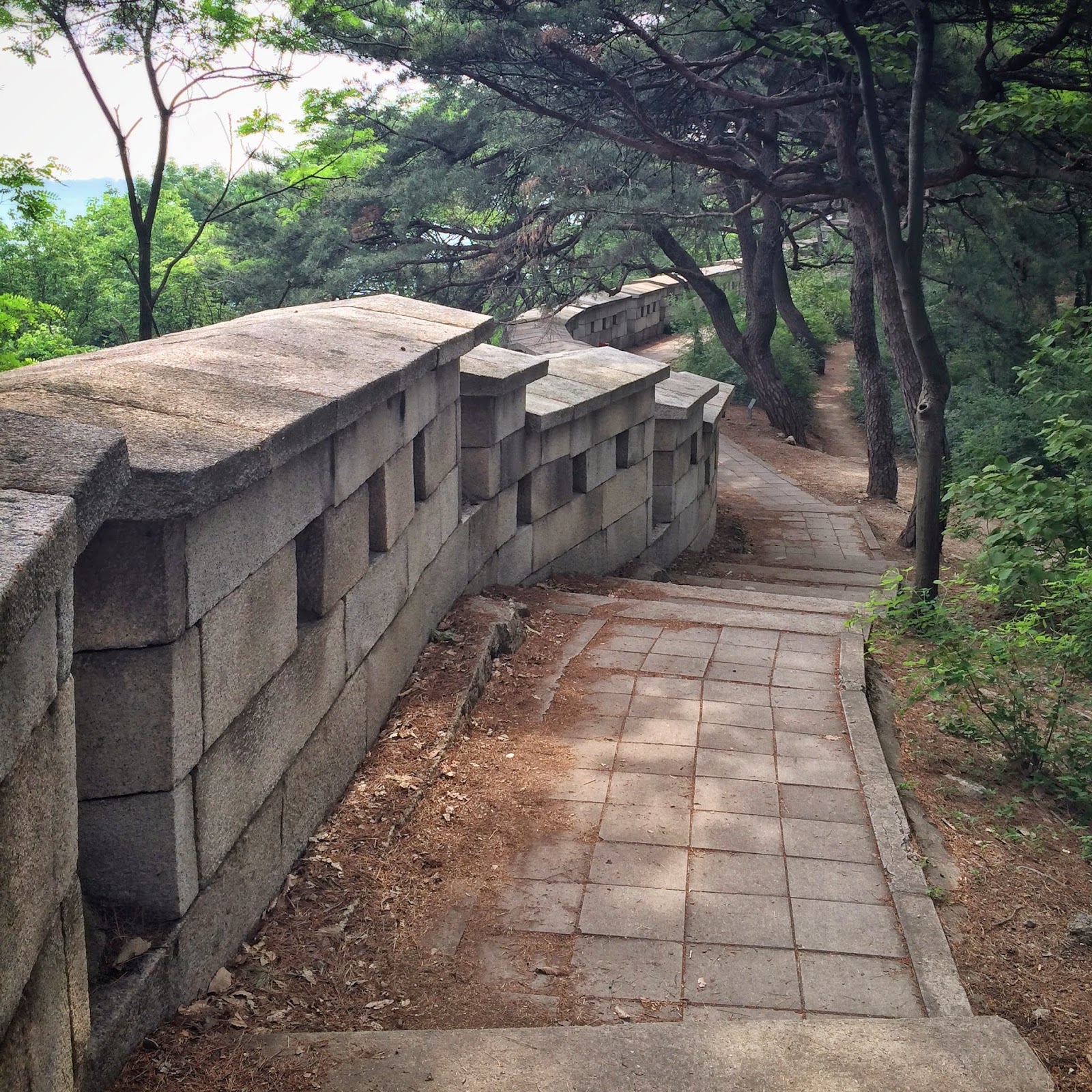 Down along Chong-gye-cheon stream,
beneath the skyscrapers of downtown's Jongno district: 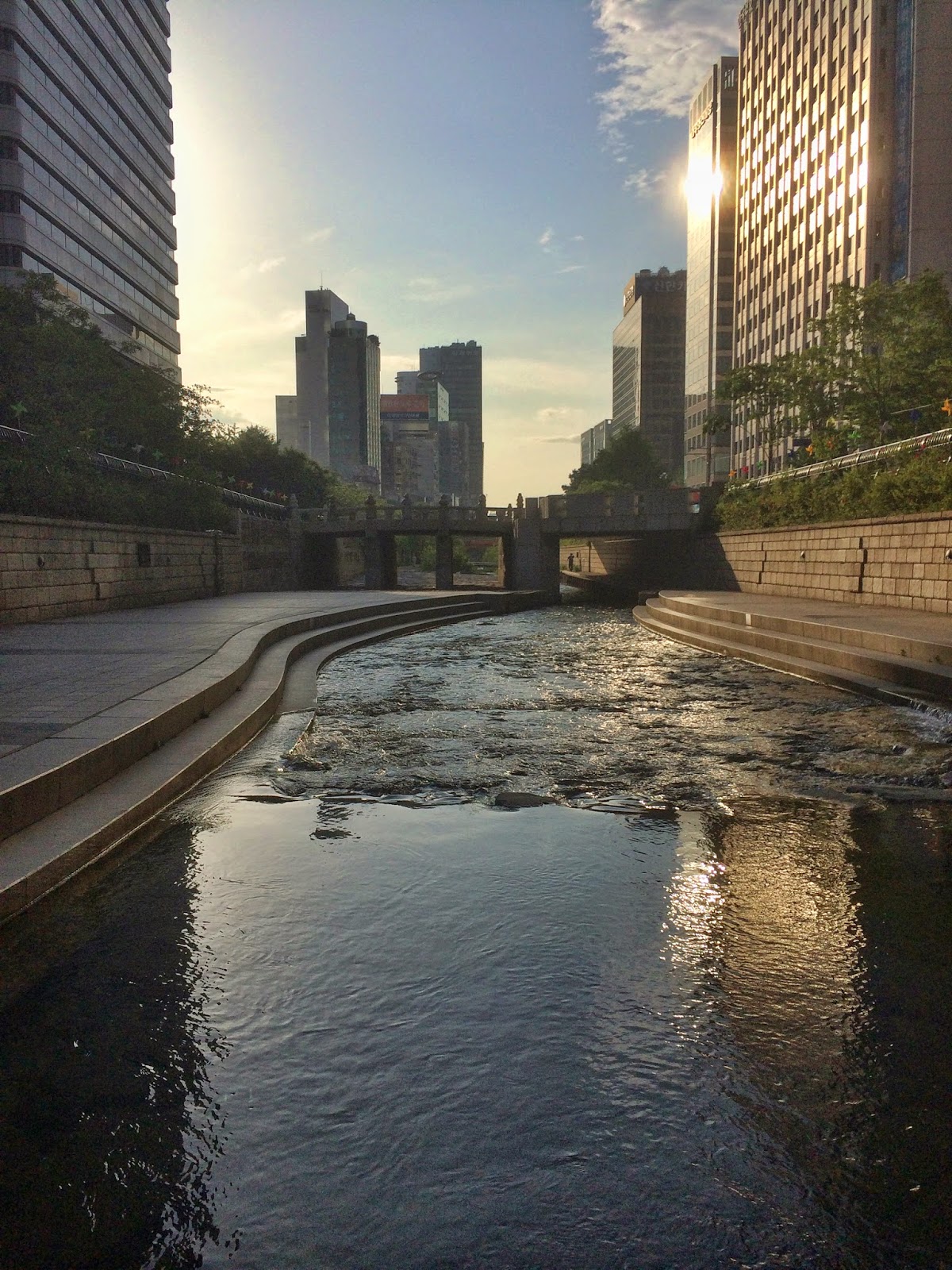 Along poppy-lined vegetable gardens in Gangneung: 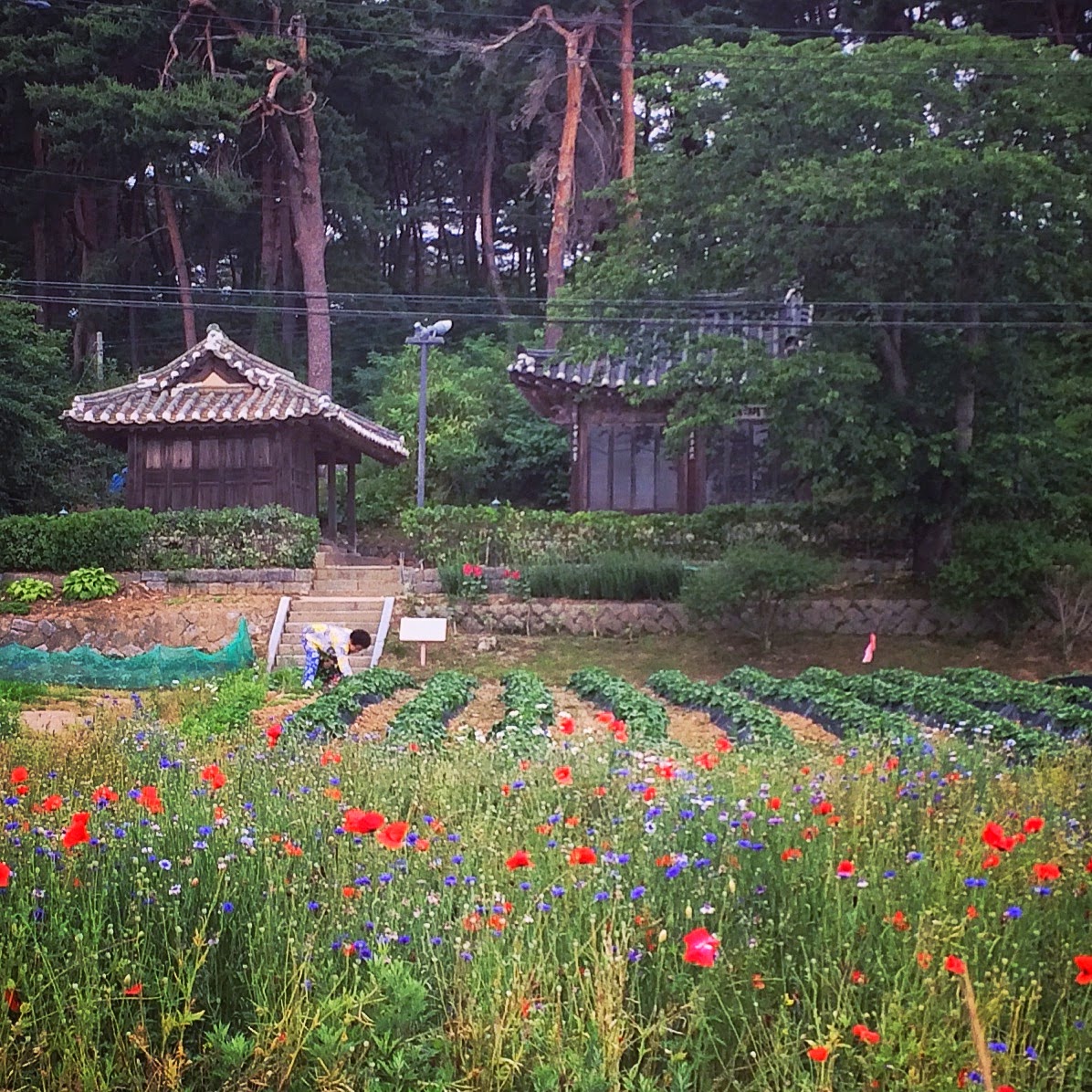 ...on the sandy boardwalk along the country's east coast in Gangneung: 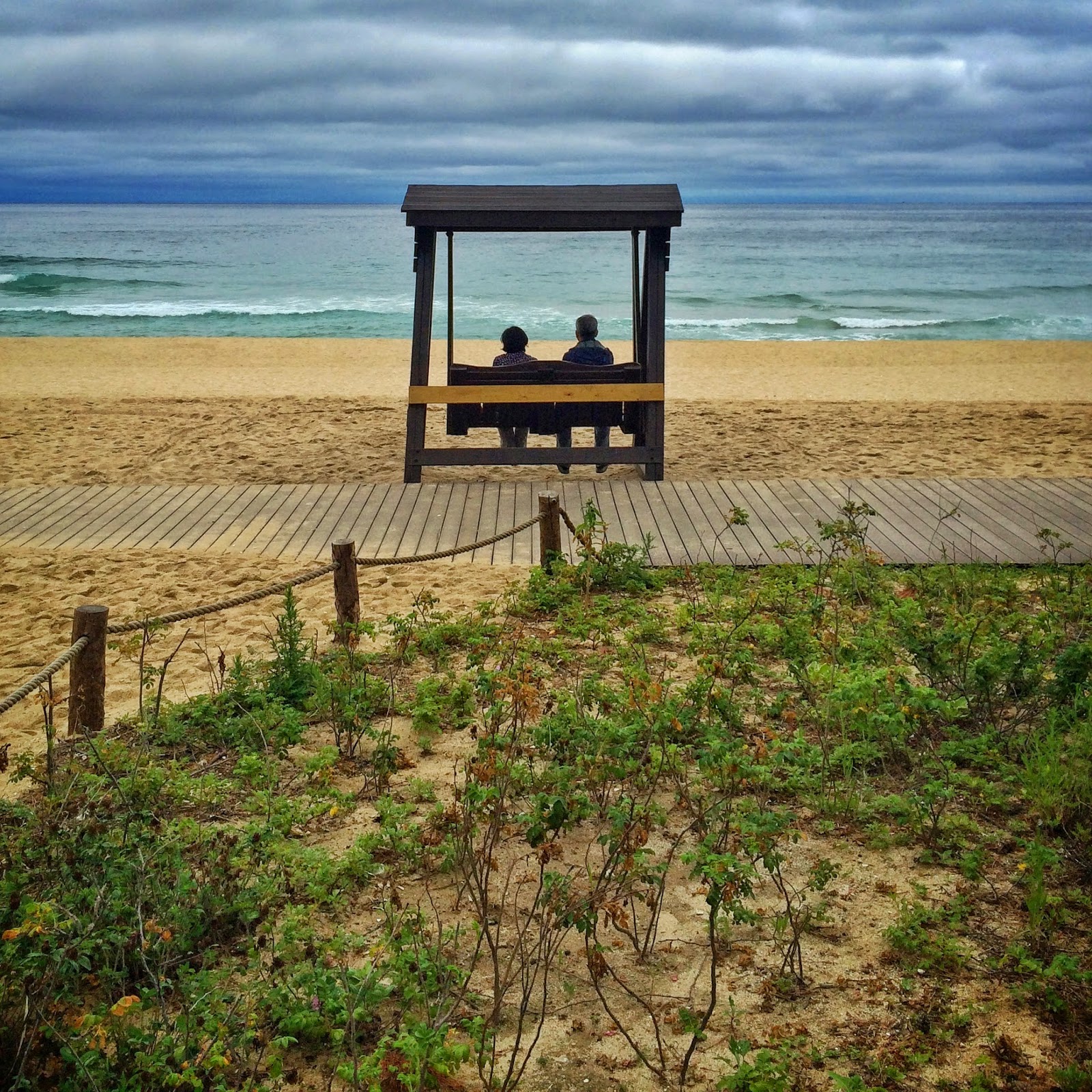 By the remaining fortified gate in Jeonju, in the country's Southwest:

Crossing the Jeonju river on an idyllic morning: 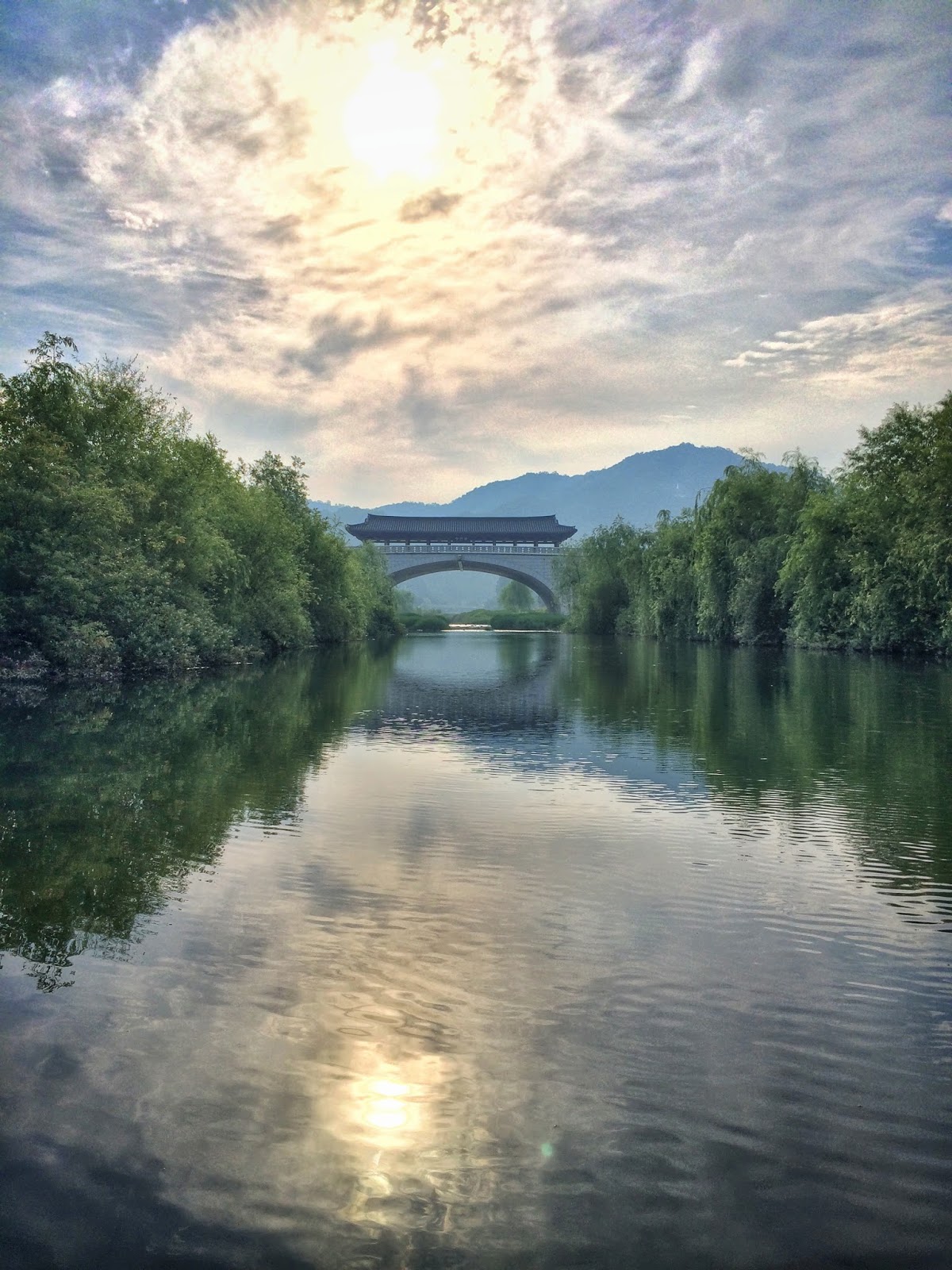 So, back to Songdo, on that first morning.

Large parts of the city--Korea's gamble on establishing a brand-new international business hub for NE Asia--are still vacant lots, as I saw when I opened the curtains from our tenth-floor hotel room:

The morning was foggy, but by later in the day, this was the view: 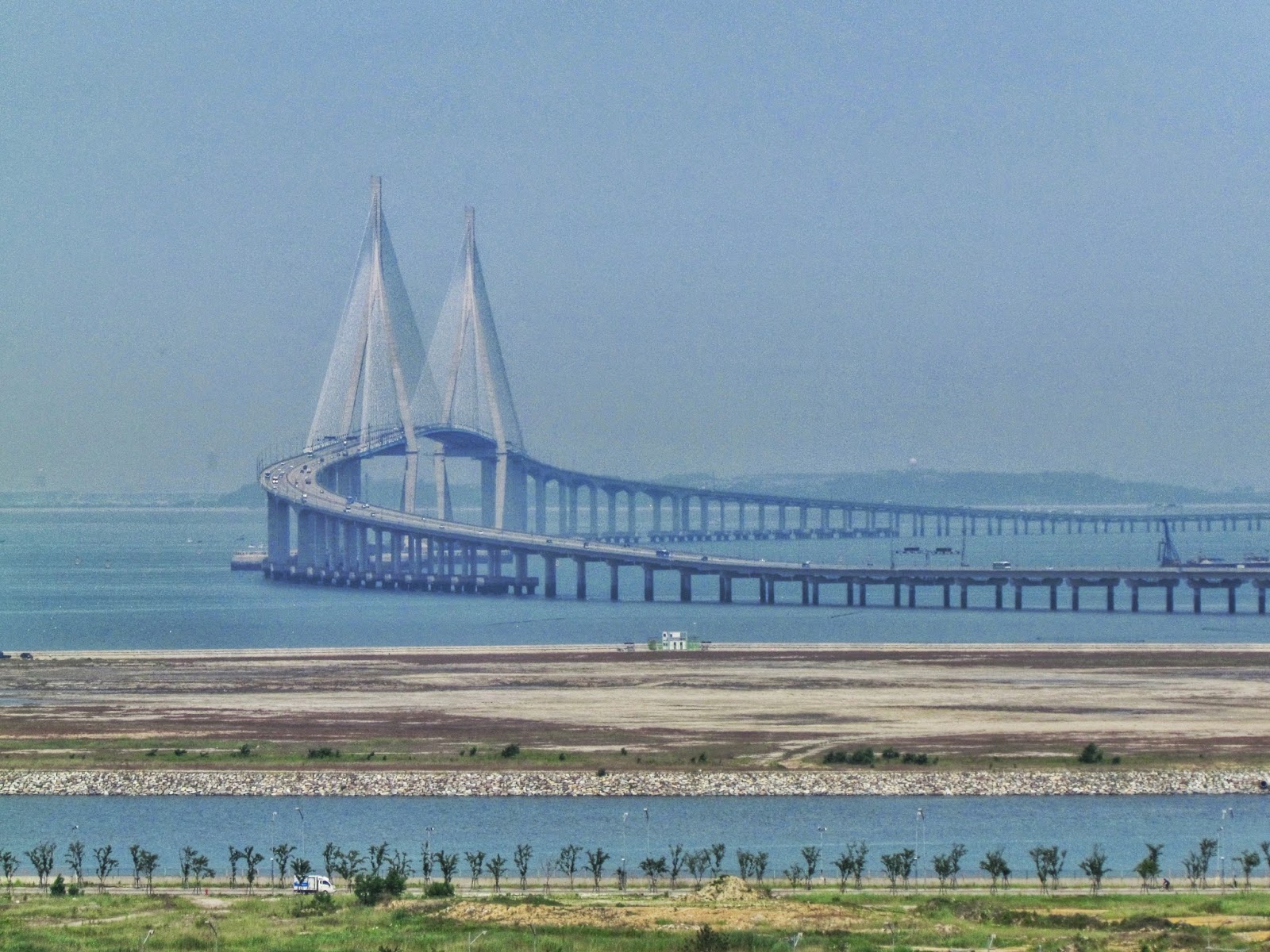 --the elegant bridge that links the Incheon airport to the new city of Songdo..

The city is 'filling in' nicely, with families moving into these apartment buildings: No shortage of modern angles and curves: 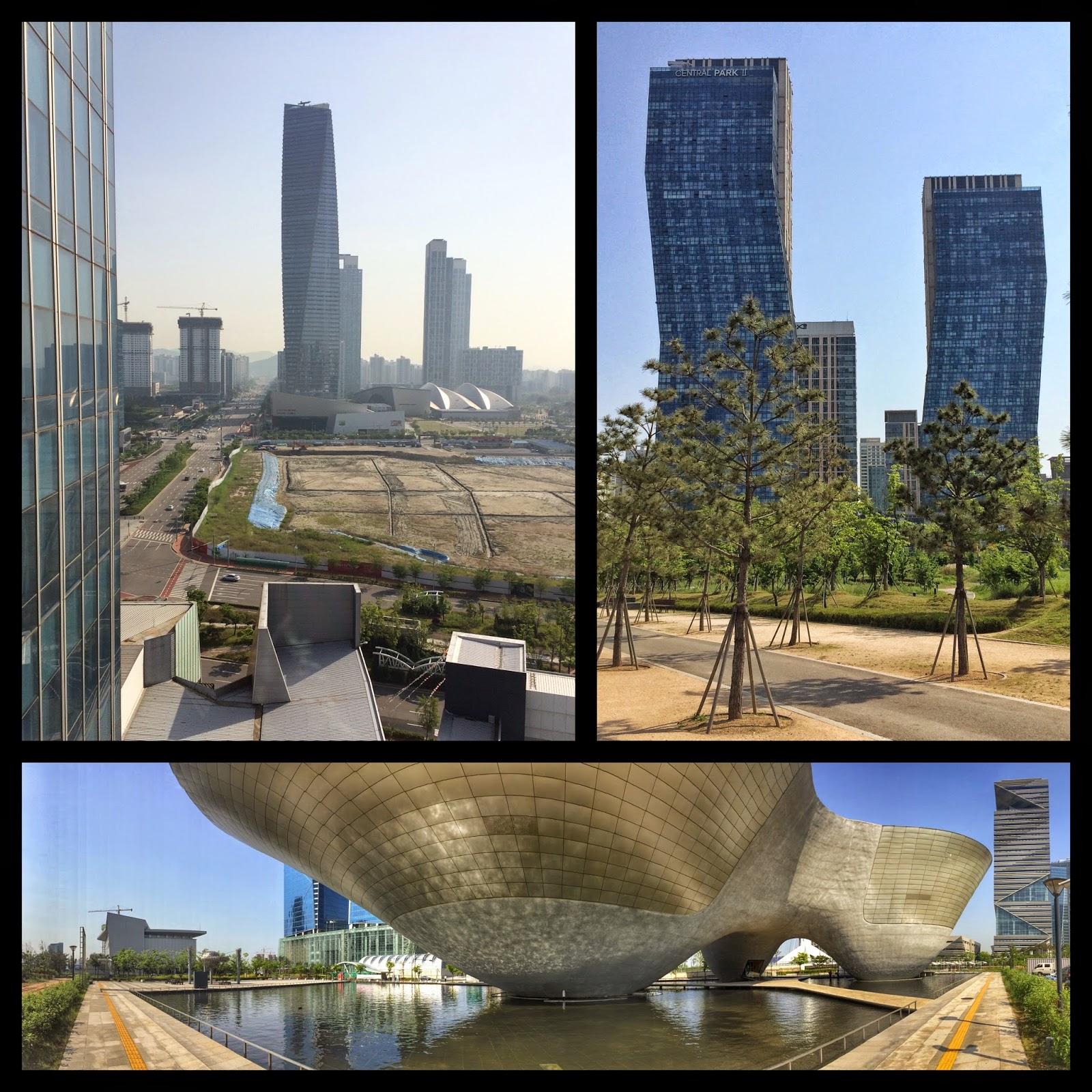 ...along with the requisite public art: 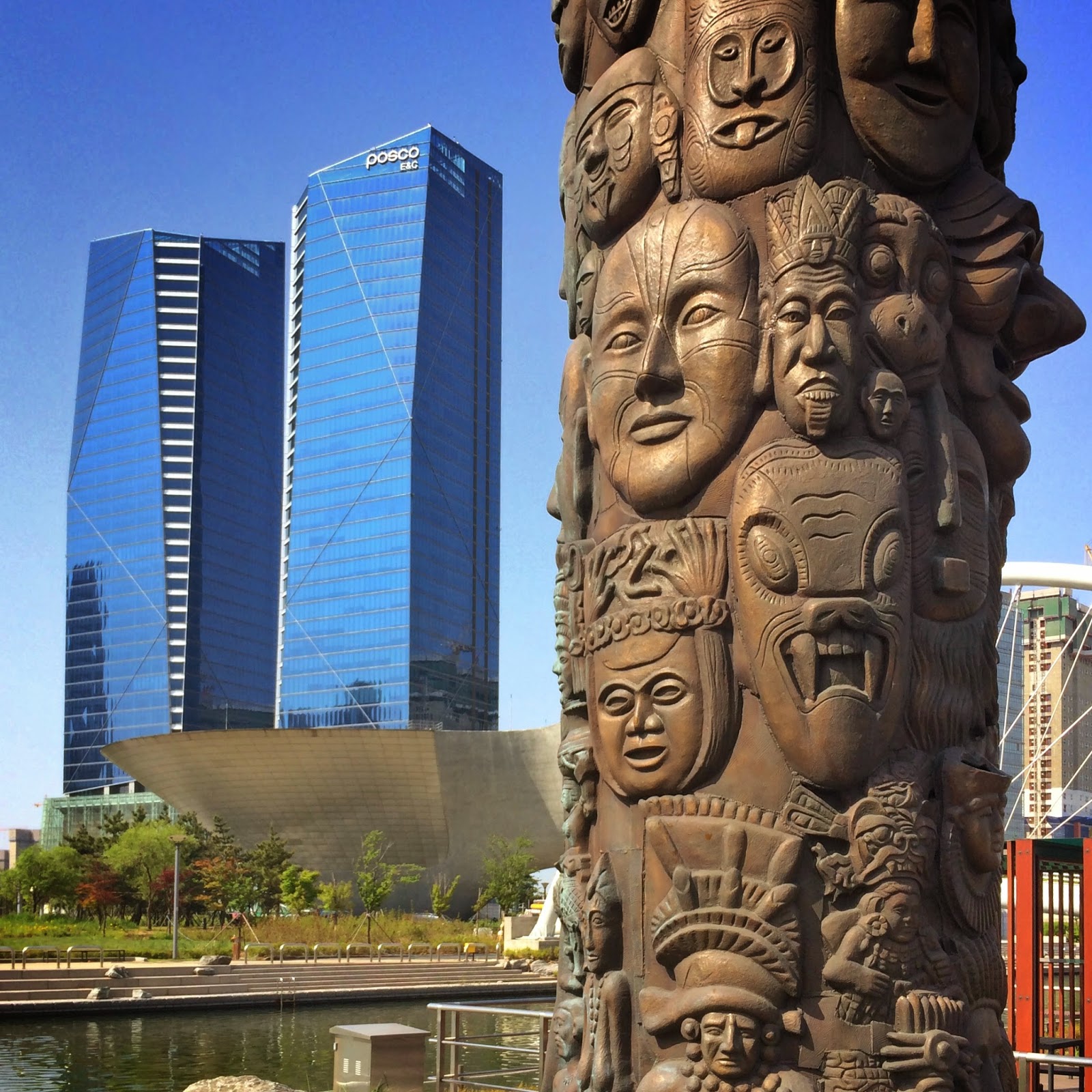 The city is scheduled to host this September's Asian Games, so as I ran through the "Central Park" area, there was a lot of construction work and tidying-up still going on...

Songdo is being developed as a planned modern Asian city that is consciously adapting what works in cities around the world: New York's Central Park, Venetian canals, Savannah's numerous neighborhood squares, along with incredible wifi connectivity. It's supposed to be a "smart city," with live-work-play pedestrian access.

A BBC article recently reported:
The waste disposal system is also impressive - or it would be if you could see it. Because there are no rubbish trucks trawling the streets or vast bins dotted around blocks of flats. Instead, all household waste is sucked directly from individual kitchens through a vast underground network of tunnels, to waste processing centres, where it's automatically sorted, deodorised and treated to be kinder to the environment.

Some investors are hoping that part of Songdo's growth will come from Western expats who are growing tired of the pollution in China and will come settle here. Hmm. (I read that in this recent article from France's LeFigaro.) 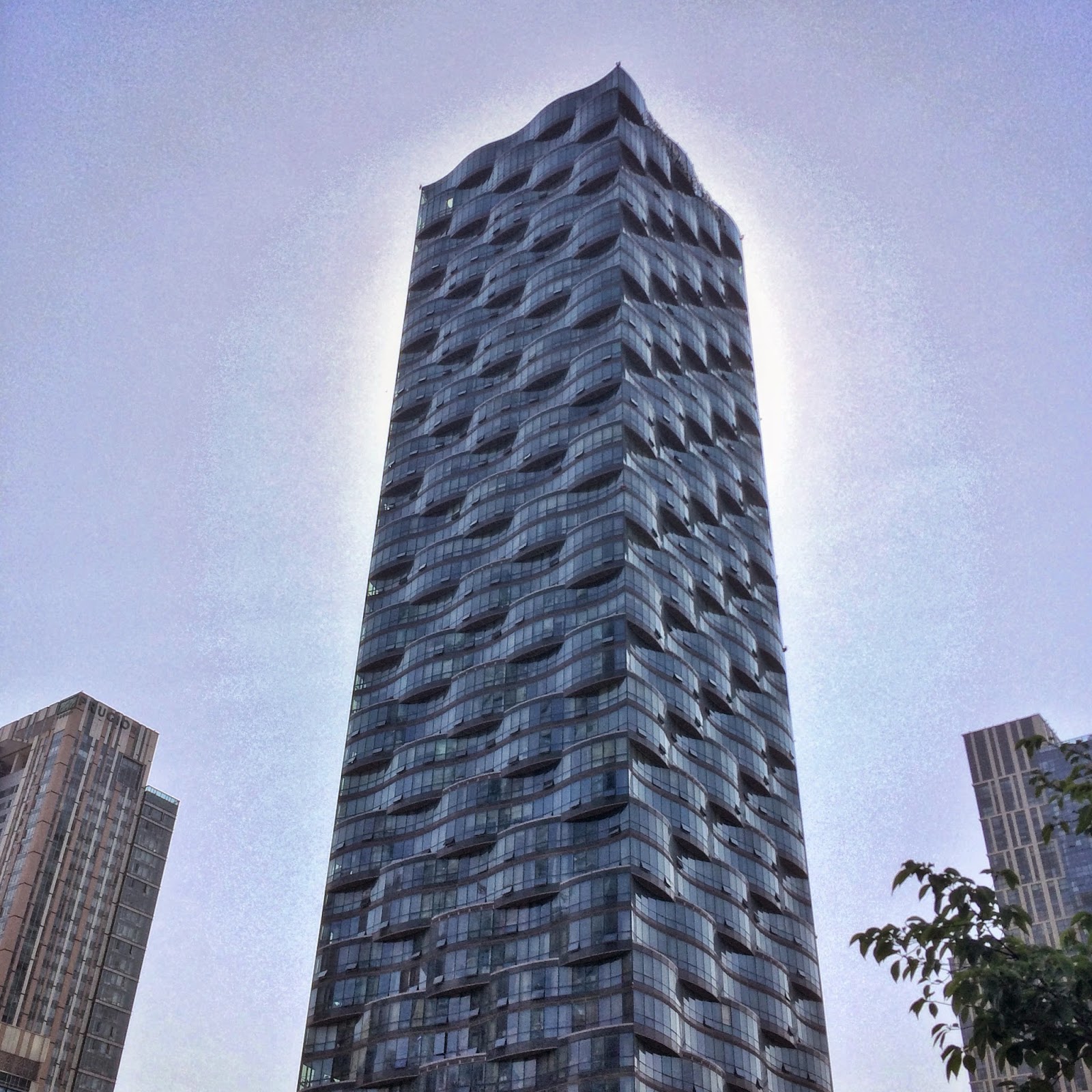 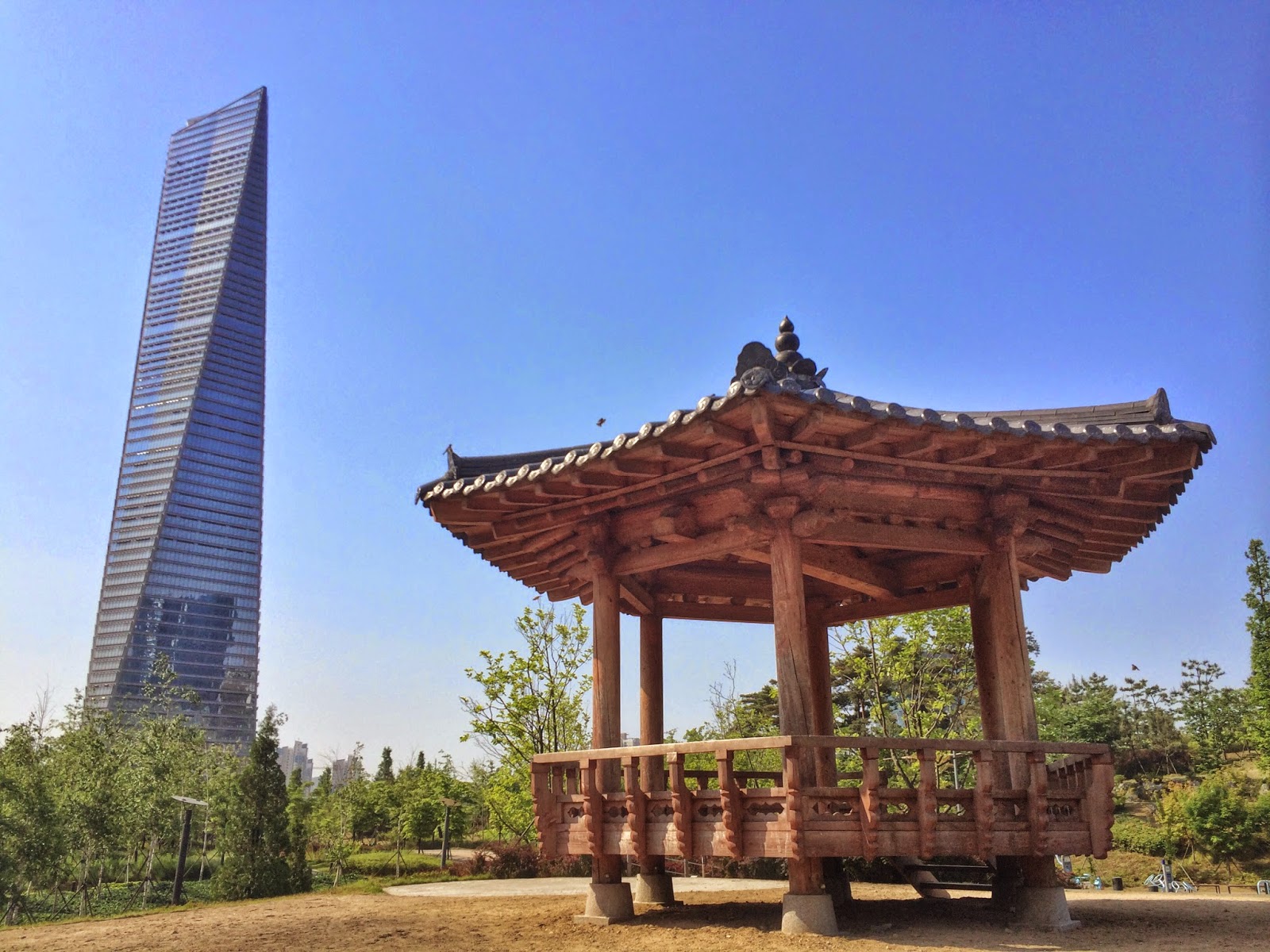 Among the multitude of newly planted trees, there is also a plethora of public exercise equipment, traditional Korean shade-pavilions, and even a phone-booth-sized public library: 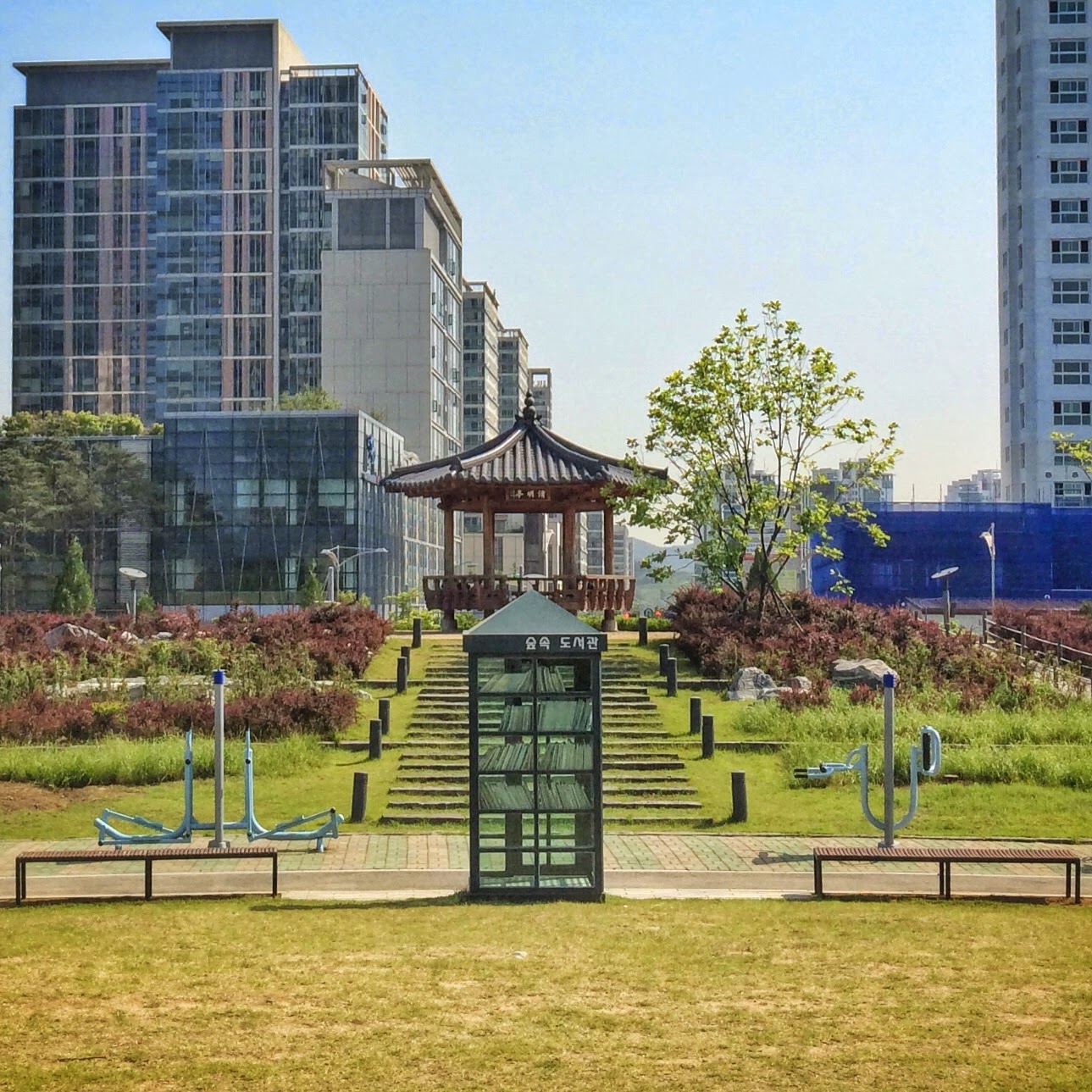 Get tired of straining your eyes by reading on your smart phone or tablet while on your lunch break? Ahh, the tactile pleasure of paper in your hands...

And there's the subway--gleaming, all polished granite and marble--feels vaguely post-apocalyptic, hardly a soul in sight: 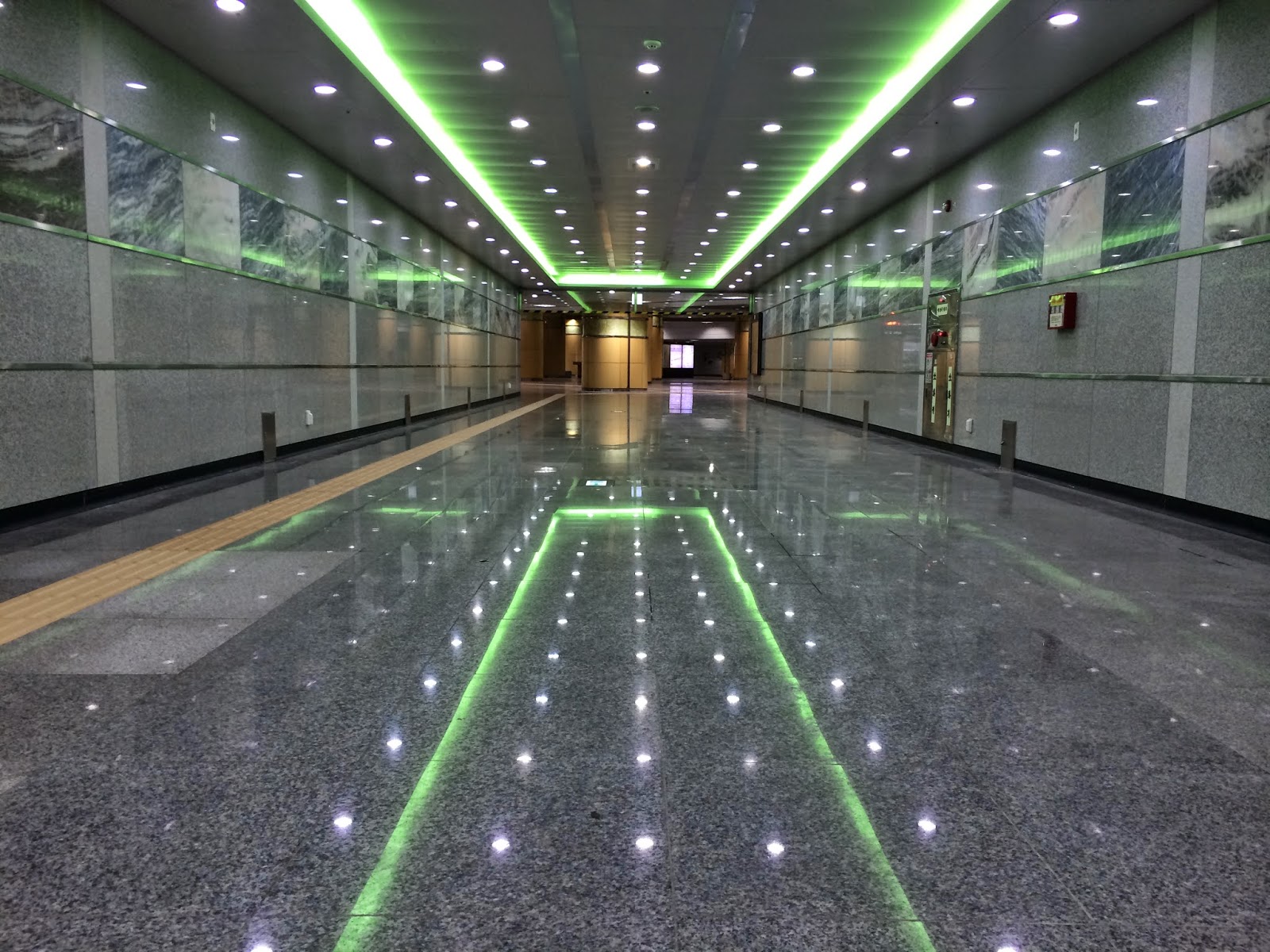 But you can be in central Seoul in an hour, avoiding the traffic jams above ground.
That's what my wife did, after our first day in Korea--we took the subway from Songdo into the capital, an easy ride...

Running around Korea, then...

...in the weeks to come, I'll post more specifics about the remaining running routes:
mountain, stream, and river runs in Seoul,
along the coast and around a lake in Gangneung,
and through a 'hanok village' and along the river in Jeonju. 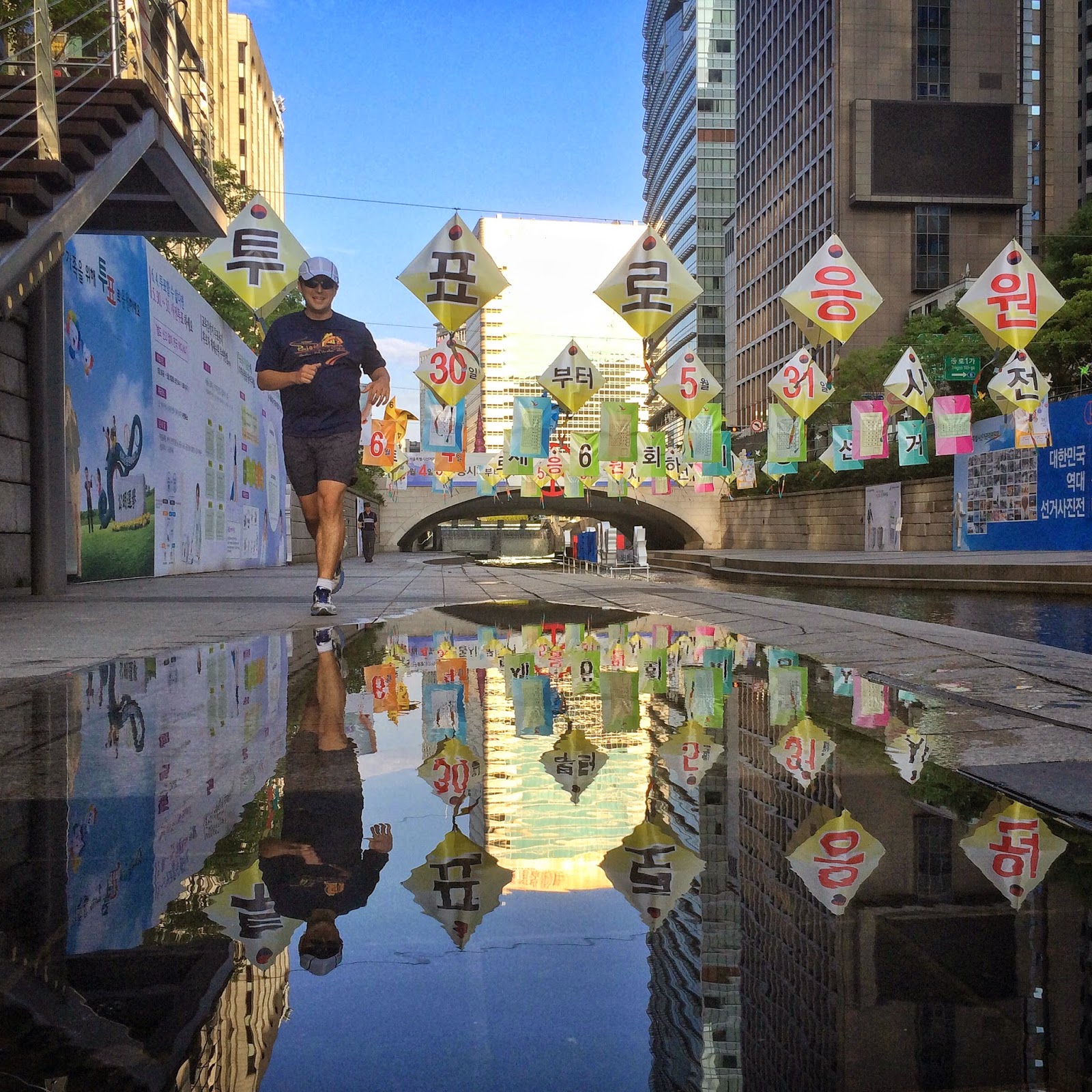 Yours truly, running...and it's not a selfie...
More on this later.