"Mi-yeok mahn-du"--translates from Korean as "seaweed dumplings." As far as I know, in la cuisine coréenne, no such recipe exists. Until now. The other evening, I experimented and my (Seattle-born-and-bred) wife proclaimed it a success. But first, some background...

"Mi-yeok-gook:" Seaweed-soup.
Growing up, it was one of my favorite things to eat on a cold day...Mom's home-cooking--not something I tried to explain to my classmates at school at the time; fifth-graders in Georgia would have been grossed out by slimy strands of greenish-black kelp swimming in steaming brine, right?

And the name--"mi-yeok-guk"...more like "me YUCK gook" to the untrained ear--sounding too much like a racial slur...

But today--with Korean-Mexican fusion food-trucks cruising the streets from L.A. to the East Coast to Tucson, and with Korean-galbi-marinade-spray ("spray?!) for sale at Safeway (at Safeway!?)--"kimchi is the new salsa" (I'm claiming that quote as my own, by the way) and Korean-food is no longer an inexplicable food from a country no one can find on the map. (Thank you, ahem, Psy and Samsung.)

So--miyeokguk, come on out of the murky shadows and take your place among the great soups of the world.

And yet, the texture of the seaweed--for the unitiated, it can be scary. I mean, take a look at the dried miyeok (wakame in Japanese): 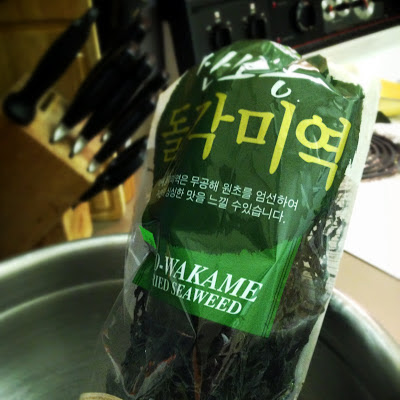 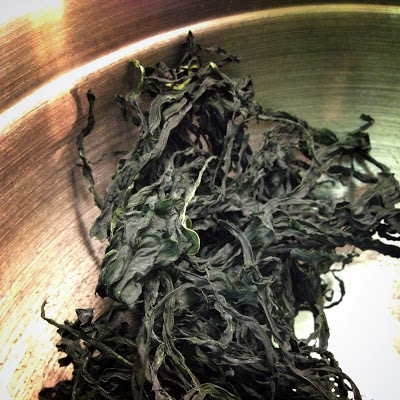 It IS kind of scary...
...and then when you reconstitute it: 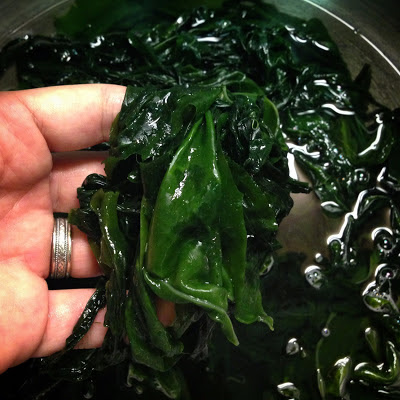 It's like what you would grab if you were to put your hand
down along the sand while walking along the beach at low-tide, no? 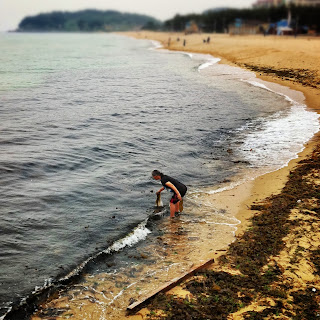 A couple of summers ago, while in Sokcho, S. Korea,
I went for a walk along the beach one evening and saw this
hearty 'halmoni' (respectful term for 'grandmother/older woman')
gathering some miyeok...

...which she then proceeded to sell
to a guy who'd come, with his daughter, on his bike: 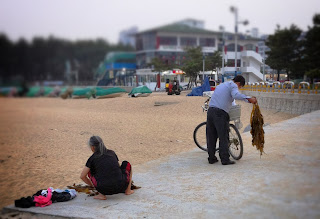 ...and then off they rode, kelp in hand, homeward-bound: 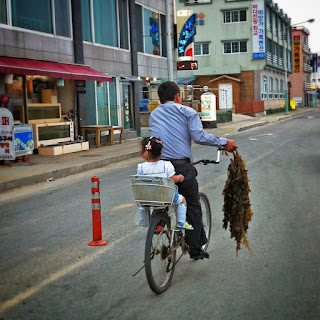 Okay, back to Tucson.

So--since the seaweed can seem scary to some
a while back I thought--
what if you just take the seaweed out of the broth,
chop it up, wrap it up in wonton wrappers,
like traditional gyoza/mandu,
and then just put the dumplings back in the broth to finish cooking?

My mother, on one of her visits,
said something to the effect of
'hmm, that's never been done...'

HERE's a basic recipe for the soup;
what follows below is my variation, turning
miyeok-gook (soup) into miyeok-mandu (dumplings).
Basically, you just make the soup, but instead of leaving
the seaweed in the soup, halfway through the process you remove it,
chop it up, then use it to make little dumplings, which you then
put back into the soup to finish cooking.

As you saw in the photos above
(and as you can read in the above link),
you have to soak and rinse the seaweed... 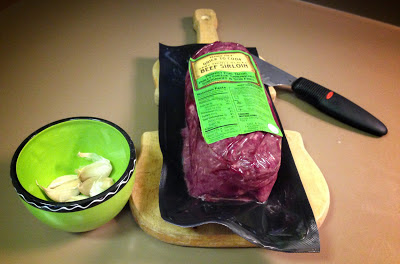 You start by sauteeing the minced garlic and beef in sesame oil in a the bottom of whatever pot you're going to use to make the soup in: 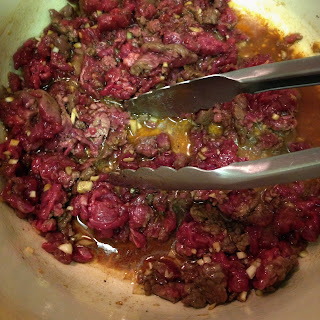 After the beef is mostly done, add the seaweed: 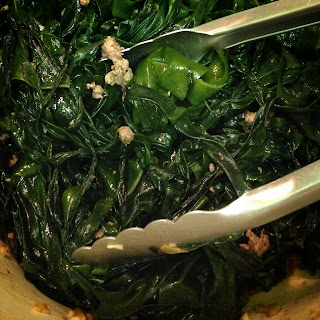 Sautée for a few minutes until the seaweed begins releasing some of its juices into the pot...Then add water (some add beef broth) and bring to a boil. Add soy-sauce to taste--do NOT add salt. 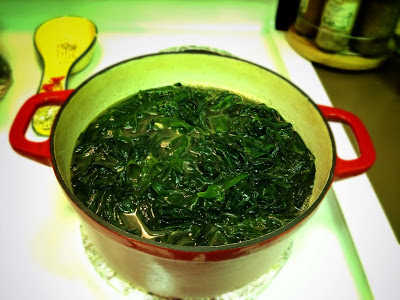 For my dumpling-variation, do NOT cut up the seaweed--you want long strands so that you can take them out easily after a few minutes of boiling: 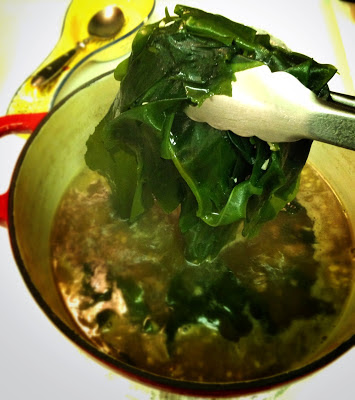 Shake off as much of the broth as you can before letting the miyeok cool just long enough so you can  chop it coarsely--I included some of the beef from the pot of soup: 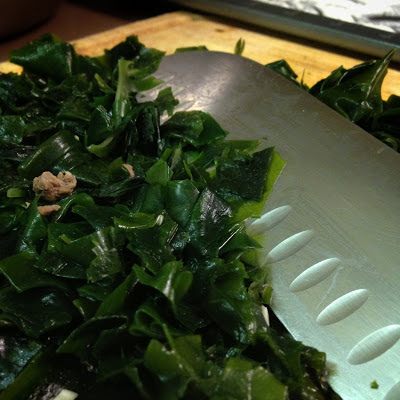 It's traditional to have some seafood in the soup--often oysters or mussels...I thought some clams would add some more briny flavor and seafood texture... 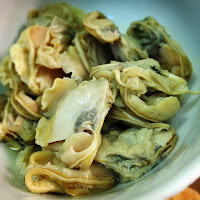 ...so I chopped some up (already cooked) to add to the seaweed/beef/garlic mixture.

And these are the wonton-wrappers--you buy them frozen; thaw them overnight in the refrigerator. Put some of the seaweed/garlic/beef/clam filling in the middle of the wrapper: 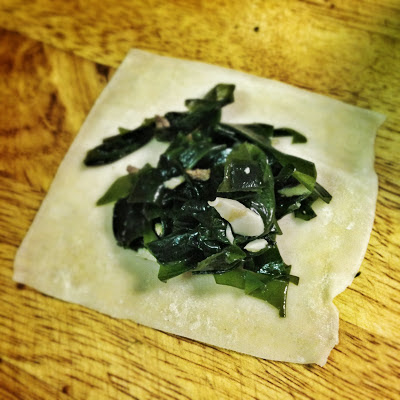 Dab the edges with water (or egg-white) and seal tightly...and after a while, you'll end up with a tray of these miyeok-mahndu: 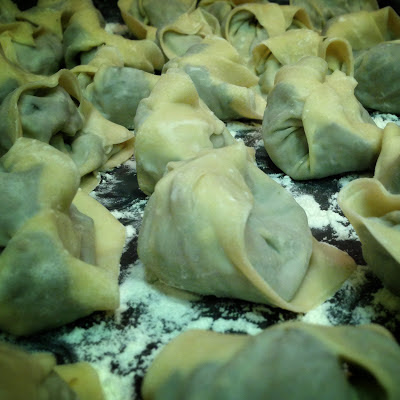 (To keep them from sticking, place the dumplings on a floured baking sheet before cooking them.)

Bring the soup in the pot back to a boil, then reduce the heat--
if you put the dumplings into soup that's boiling too rapidly, the dumplings will fall apart.
Place the dumplings in the soup, and once they float,
cook for an additional minute or two--
the filling is already cooked, so all you're cooking
is the dough of the dumpling-wrappers--
and of course, you want the seaweed/garlic/beef/clam filling hot...

When the dumplings are done, the wrappers become
almost translucent;
you end up with with these 'packages' of
oceanic nutrition in a simple yet hearty broth: 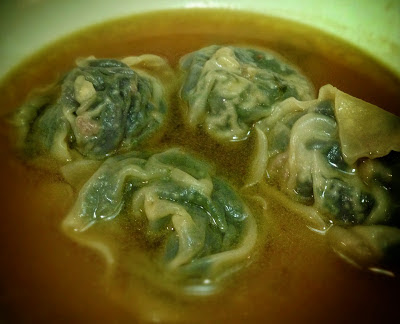 The seaweed is safely contained in the dumplings;
no strands of kelp to slurp like
giant green/black noodles.

What do you think?