To the Arch and back...and PROOF of deteriorating standards in music...

Last week, I traveled to St. Louis for a conference. With storms in the mid-west, there were cancelled flights, so the itinerary turned into an all-day-long affair: Tucson to Dallas, then Dallas to Chicago, and finally Chicago to St. Louis, arriving late at night.

Since this was a work-trip with not much free time, I didn't bring my camera...I immediately regretted that decision the following morning when I looked out my hotel window, waking up to this view:

...from the 630-ft. high stainless steel Gateway Arch on the left to the old 1850's-era courthouse (site of the original Dred Scott court case) on the right...
(no camera, no problem...if your cellphone is charged...
I'm still amazed at what a cellphone camera can do...)

Even though there wasn't a lot of free time, it wasn't all work and no play--I did get a chance to run along the riverfront--glorious spring weather under the amazing Gateway Arch: 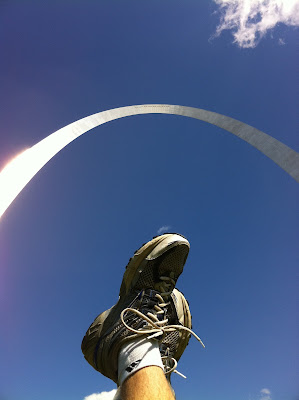 If you look carefully, you can just make out the tiny windows at the apex of the Arch--the surprisingly small observation deck...
...So--the view from the top of the Arch,
stitched together from four pictures--
looking westward over downtown,
and then looking directly beneath the Arch,
then finally 'behind' to the Arch's shadow
stretching eastward over the Mississippi River:

To see more photos from St. Louis, go to:
http://exoculis.blogspot.com,
a new photo-blog I've started...
=====================================================
Now...the following is not a categorical rant on modern music--there IS some good stuff out there...but on the whole, inventive melodies and thoughtful lyrics are drowned out by canned rythyms and debased refrains, AND HERE's THE PROOF:
Narcisissm on Rise in Pop Lyrics
(click for NPR audio file and/or transcript)
and
A generation’s favorite tune: ‘I’m So Vain’
(from The Week newsmagazine--reprinted here:
Young people “love themselves more today than ever before,” says University of Kentucky psychologist Nathan DeWall, and the proof is in their music.

He and his colleagues analyzed the lyrics of Billboard Hot 100 songs from the past three decades and found a steady increase in self-centeredness and hostility toward others.

“In the early ’80s lyrics, love was easy and positive, and about two people,” study co-author Jean Twenge tells The New York Times. “The recent songs are about what the individual wants, and how she or he has been disappointed or wronged.”

The study found a marked increase in the prevalence of the words “I” and “me” in song lyrics, and fewer instances of “we” and “us.” It also registered a jump in angry lyrics about hating and killing, and a drop in songs containing positive words like “love” or “sweet.”

The researchers suggest that rampant narcissism may be making it harder for people to connect with one another.

They point to other surveys that show that more people are apt to feel sad and lonely now than in previous decades.
Posted by J. Cyr at 10:24 PM