Have you ever seen one of those simple oval bumper stickers that just have "13.1" in it?

AND...it was fun. I certainly did not do it for competitive reasons. I was fourthousand-somethingth out of over 19,000 half-marathoners...but very pleased that I clocked in at just under two hours on my first try!
In fact, I had just registered for it only a week-and-a-half ago.

As you can tell--it took a long time to get out of the starting-area...so long, (almost half-an-hour!) that by the time I actually started running, I had to go to the bathroom.

So I did what all the advice says NOT to do--I sprinted at the beginning. You're supposed to take it nice and easy, saving up fuel for later in the race, but I knew that I needed to make it to the first porta-potty station pronto...So I was weaving in and out of the crowd for the first mile-and-a-half, and I looked down and noticed on my watch (one of those runners' GPS things; my wife got it for me) that my pace was a 5:30 mile--I have NEVER run that fast! I sprinted to the row of blue toilets--STOPPED my watch-timer--answered nature--and then re-started my watch as I sprinted back to the join the sea of runners, hoping that I hadn't 'burned' too much too early...

And so, due to that first (and only) bathroom break, my 'official chip time' is two minutes slower than what my watch time says--but I am sticking to my watch: 1:58.

(despite the blurred face and bib number--this IS me;
indulge me in my semi-anonymity--I am not a facebooker...)
If you can make out the course map below, you'll see that every mile-and-a-half or so along the course--both for the marathoners and the half-marathoners--there are rock-bands set up in addition to tables of water, sports-drinks, and about 2/3 of the way, 'GU' nutrition gel...The music was a nice addition--already, the adrenalin cloud from the 19,000 runners is heady, but the rock bands are a nice spaced-out audio-motivator... 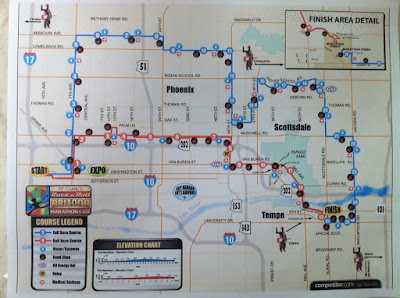 I even got a medal (!), and of course the obligatory T-shirt: 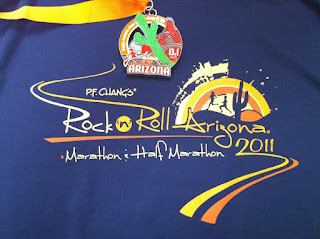 
And now I know what the "13.1"-in-an-oval bumper stickers mean.
No, I'm not going to stick one of those on my car.
But this past weekend will definitely not be my last half-marathon...
Posted by J. Cyr at 7:14 PM