First javelina sighting...and so far, no more muffin tops...
Week número uno of the new school-year has come and gone.
(Finished it with une bonne bière irlandaise: yep, a Guinness, draft, at "The Firkin & Friar" down the road...)
So far I've been pretty good about keeping my Buenos Diases and Bonjours straight;
we'll see how long that lasts as my foray into multi-language teaching continues...
A few evenings ago, we had our first javelina sighting at our new place--literally right outside our front door! Our next-door neighbor spotted them and called us, and we looked out our respective doors at the critters snorting and foraging in the sycamore leaves by the fountain...
I had just enough time to grab the camera and manage this blur, before the javelinas ran off: 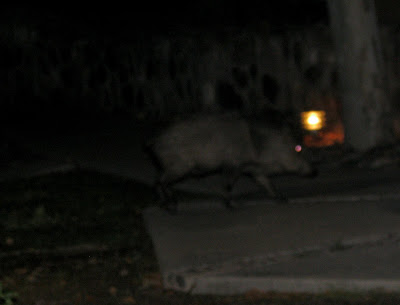 The biggest of the lot must have stood thigh-high...
So, as our friends next door have said, when we arrive home at night, and we get out of our car,
we should be, not afraid, but 'aware, just be aware.'
===================
So, how many years ago was it that 'muffin-top' entered colloquial American English?
(here's a definition:
...generally pejorative slang term used to describe the phenomenon of overhanging flesh when it spills over the waistline of pants or skirt in a manner that resembles the top of a muffin spilling over its paper casing. This generally occurs when an obese or overweight person wears low-rise, hip-hugger pants, or midriff-baring tops that are too small. However, this phenomenon can be seen even on a slim person if his or her pants or shorts are poorly fitted.--courtesy of http://en.wikipedia.org/wiki/Muffin_top)
At any rate, thankfully, high-school fashion this year, at least in Tucson, is not really including or encouraging that regrettable phenomenon. It's nice to not have to enforce that aspect of school-dress-code...Moving on...
==================
Basil--looks like we're not going to have it here...
The local birds and lizards and squirrels and bunnies leave the verbena, lavender and rosemary alone;
Thai and Italian basil, though, are their preferred snack-leaves.
After two months of living in our new place, then, we realize our patio-herbs will be limited...
But the cactus-flowers abound. August is peak time for fishhook-barrel-cactus blooms. This is our third summer here, but we still find them spectacular, these flame-bursts in the midst of pineapple-esque fruits: 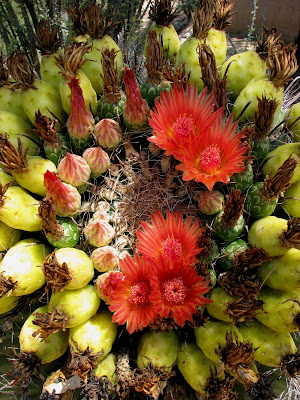 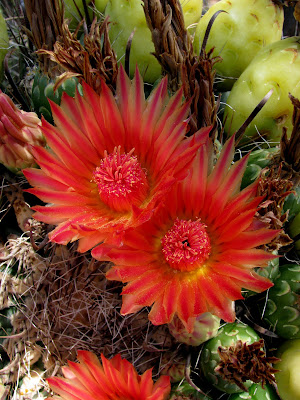 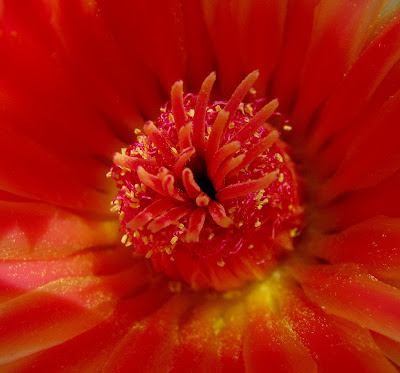 ...I finally looked up the word "firkin:"