Back to work today--the kids not unreasonably squirrely as they begin second semester.

Not much time to blog over the break; after the last entry, we had out-of-town company of the staying kind, both family and friends...much refreshment for hosts and visitors...


And then it even snowed down here in the Tucson basin--only for about 10 minutes, back on the 26th, but still--my first Tucson snowfall! Then back into the upper-70's, (jogging in the shorts, spotting vermillion flycatchers in the park), and then back to cold grey today. Seattle weather. Without the all-black-wearing-NPR-listening-hemp-bag-toting-pedestrians.

Looking south over Tucson, toward the Santa Rita mountains, from where Sabino creek exits Sabino canyon. The sycamores and cottonwoods on December 24th were at their 'autumnal peak' amidst the cacti: 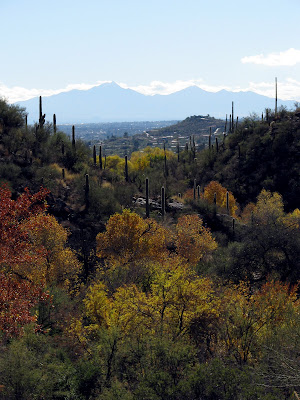 We took my mother on the "tram" four miles and a thousand feet up into the canyon--a nice way to show visitors some wilderness if they don't have the time/ability to hike all the way in and out. I'm a sucker for mountain-reflection photos. So what if it's a visual cliché--it's arresting every time. 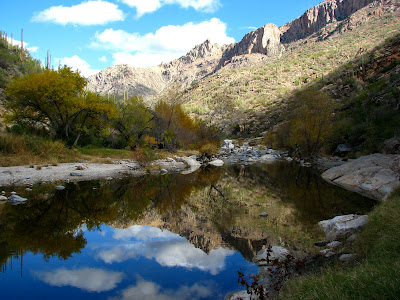 It's hard to find a 'bluer' sky than on a clear winter day in southern Arizona... 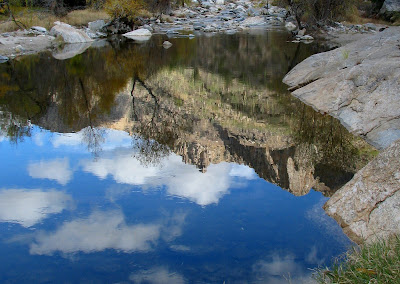 ...and a bit more arboreal color in the upper canyon: 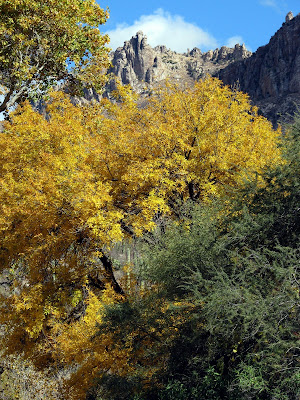 A week later, after the city's flirtation with winter, we drove my mother up to the top of Mount Lemmon to see some of the remaining snow. The ski resort up at 9000 feet had just opened a few days before, but this day was warm even up on top--around 50 degrees. Here's a view looking from about 8000 feet off to the Northeast, past the snowy northern side of the Santa Catalinas to the lower San Pedro valley: 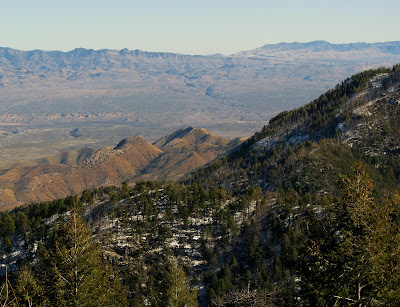 About midway down the Catalina Highway are some "hoodoos" popular with rock climbers: 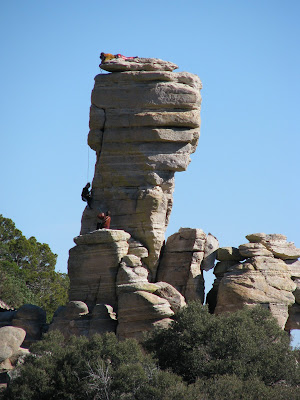 ...and a good spot for gazing across the entire Tucson basin, down across the Rincon mountains: 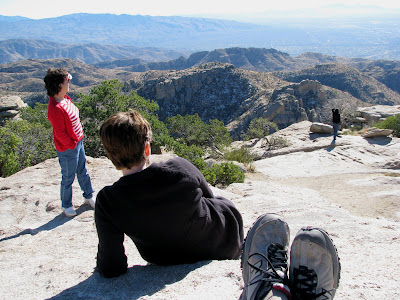 And, for all word-nerds: here is the official 2009 List of Banished Words.
How many are you guilty of using? Alas, we are all cliché-prone...
(Courtesy of Lake Superior State University's annual List of Words to Be Banished from the Queen's English for Mis-use, Over-use and General Uselessness.)
"It's that time of year again!"
Lake Superior State University "maverick" word-watchers, fresh from the holiday "staycation" but without an economic "bailout" even after a "desperate search," have issued their 34th annual List of Words to Be Banished from the Queen's English for Mis-use, Over-use and General Uselessness. This year's list may be more "green" than any of the previous lists and includes words and phrases that people from "Wall Street to Main Street" say they love "not so much" and wish to have erased from their "carbon footprint."
Environmental buzzwords are getting the axe this year. "Green" and "going green" received the most nominations.
GREEN – The ubiquitous 'Green' and all of its variables, such as 'going green,' 'building green,' 'greening,' 'green technology,' 'green solutions' and more, drew the most attention from those who sent in nominations this year.
"This phrase makes me go green every time I hear it." Danielle Brunin, Lawrence, Kansas.
"I'm all for being environmentally responsible, but this 'green' needs to be nipped in the bud." Valerie Gilson, Gales Ferry, Conn.
"Companies are less 'green' than ever, advertising the fact they are 'green.' Is anyone buying this nonsense?" Mark Etchason, Denver, Colo.
"If something is good for the environment, just say so. As Kermit would say, 'It isn't easy being green.'" Kevin Sherlock, Hiawatha, Iowa.
"If I see one more corporation declare itself 'green,' I'm going to start burning tires in my backyard." Ed Hardiman, Bristow, Va.
"This spawned 'green solutions,' 'green technology,' and the horrible use of the word as a verb, as in, 'We really need to think about greening our office.'" Mike McDermott, Philadelphia, Penn.
CARBON FOOTPRINT or CARBON OFFSETTING – "It is now considered fashionable for everyone, tree hugger or lumberjack alike, to pay money to questionable companies to 'offset' their own 'carbon footprint.' What a scam! Get rid of it immediately!" Ginger Hunt, London, England.
Mike of Chicago says that when he hears the phrase 'carbon footprint,' "I envision microscopic impressions on the surface of the earth where an atom of carbon forgot to wear its shoes."
Christy Loop of Woodbridge, Va., says that 'leaving a carbon footprint' has become the new 'politically incorrect.' "How can we not, in one way or another, affect our natural environment?"
Presidential election years are always ripe for language abuse. This year, the electorate grew weary of 'mavericks' and 'super delegates.' As Michael W. Casby of Haslett, Mich. said, when he suggested banning all of the candidates' names, "Come on, it's been another too-long campaign season."
MAVERICK – "The constant repetition of this word for months before the US election diluted whatever meaning it previously had. Even the comic offshoot 'mavericky' was terribly overused. A minimum five-year banishment of both words is suggested so they will not be available during the next federal election." Matthew Mattila, Green Bay, Wisc.
"You know it's time to banish this word when even the Maverick family, who descended from the rancher who inspired the term, says it's being mis-used." Scott Urbanowski, Kentwood, Mich.
"I'm a maverick, he's a maverick, wouldn't you like to be a maverick, too?" Michael Burke, Silver Spring, Md.
FIRST DUDE – "Skateboard English is not an appropriate way to refer to the spouse of a high-ranking public official." Paul Ruschmann, Canton, Mich.
Of course, the economy couldn't escape the list this year.
BAILOUT – "Use of emergency funds to remove toxic assets from banks' balance sheets is not a bailout. When your cousin calls you from jail in the middle of the night, he wants a bailout." Ben Green, State College, Penn.
"Is it a loan? Is it a purchase of assets by the government? Is it a gift made by the taxpayers?" Dave Gill, Traverse City, Mich.
"Now it seems as though every sector of the economy wants a bailout. Unfortunately, ordinary workers can't qualify." Tony, McLeansville, NC.
"Don't we love how Capitol Hill will bailout Wall Street, but not Main Street"? Derrick Chamberlain, Midland, Mich.
Speaking of Wall Street and Main Street…
WALL STREET/MAIN STREET – "When this little dyad first came into use at the start of the financial crisis, I thought it was a clever use of parallelism. But it's simply over-used. No 'serious' discussion of the crisis can take place without some political figure lamenting the fact that the trouble on Wall Street is affecting 'folks' on Main Street." Charles Harrison, Aiken, SC.
"The recent and continuing financial failings are not limited to 'Wall Street,' nor should one paint business, consumers, and small investors as ' Main Street .' Topeka (where I work), and Lawrence (where I live), Kansas, have no named ' Main Street .' How tiresome." Kent McAnally, Topeka, KS. "I am so tired of hearing about everything affecting ' Main Street .' I know that with the 'Wall Street' collapse, the comparison is convenient, but really, let's find another way to talk about everyman or the middle class, or even, heaven forbid, 'Joe the Plumber.'" Stacey, Knoxville, Tenn.
Internet and texting blues
MONKEY – "Especially on the Internet, many people seem to think they can make any boring name sound more attractive just by adding the word 'monkey' to it. Do a search to find the latest. It is no longer funny." Rogier Landman, Somerville, Mass.
<3 – Supposed to resemble a heart, or stand for the word 'love.' Used when sending those important text messages to loved ones. "Just say the word instead of making me turn my head sideways and wondering what 'less than three' means." Andrea Estrada, Chicago.
Overuse in news and entertainment

ICON or ICONIC – Overused, especially among entertainers and in entertainment news, according to Robyn Yates of Dallas, who says that "every actor, actress and entertainment magazine show overuses this." One of the most-nominated words of the year. "Everyone and everything cannot be 'iconic.' Can't we switch to 'legendary' or 'famous for'? In our entertainment-driven culture, it seems everyone in show business is 'iconic' for some reason or another. "John Flood, Bray, Wicklow, Ireland. "It's becoming the new 'awesome' - overused to the point where everything from a fast-food restaurant chain to celebrities is 'iconic.'" Jodi Gill, New Berlin, Wisc. "Just because a writer recognizes something does not make it an icon (a visual symbol or representation which inspires worship or veneration) or iconic. It just means that the writer has seen it before." Brian Murphy, Fairfield, Conn.
GAME CHANGER – "It's game OVER for this cliché, which gets overused in the news media, political arenas and in business." Cynthia, Mt. Pleasant, Mich.
STAYCATION – "Occurrences of this word are going up with gas prices.'Vacation' does not mean 'travel,' nor does travel always involve vacation. Let's send this word on a slow boat to nowhere." Dan Muldoon, Omaha, Neb. "The cost of petrol forces many families to curtail their summer voyages and a new word has sprung, idiotic and rootless..." Michele Mooney, Los Angeles, Calif.
DESPERATE SEARCH – "Every time the news can't find something intelligent to report, they start on a 'desperate search' for someone, somewhere." Rick A. Hyatt, Saratoga, Wyo.
NOT SO MUCH – "I wish that the phrase was used not so much," says Tom Benson of Milwaukee, who notes that it is used widely in news media, especially in sports, i.e. 'The Gophers have a shot at the playoffs; the Chipmunks, not so much.' "Casual language usage is acceptable. 'Not so much?' Not so much." David Hollis, Hubbardsville, NY. "Do I like concise writing? Yes. Do I like verbose clichés? Not so much." David W. Downing, St. Paul, Minn. "A favorite of snarky critics and bloggers." Jeff Baenen, Minneapolis, Minn.
WINNER OF FIVE NOMINATIONS – "It hasn't won an Academy Award yet. It has only been NOMINATED!" John Bohenek, Abilene, Tex.
IT'S THAT TIME OF YEAR AGAIN – Nominated by Kathleen Brosemer of Sault Ste. Marie, Ont., for "general overuse and meaninglessness. When is it not 'that time of year again?' From Valentine's sales to year-end charity letters, invitations to summer picnics and Christmas parties, it's 'that time' of year again. Just get to the point of the solicitation, invitation, and newsletter and cut out six useless and annoying words."
Posted by J. Cyr at 7:17 PM