Spanish moss, the beauty of old brick, and 'eating local'...

My stay in Georgia comes to an end tomorrow;
back to the dry heat of Tucson after a week-and-a-half of the gentle green warmth of early June, the beauty of old brick, and the freshness of local produce... 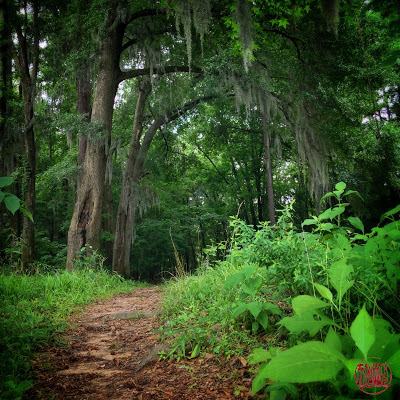 Trees by the river, draped in Spanish Moss--never gets old; each time I visit Georgia, my favorite place to go for a run is on the trails between the Savannah River and the Augusta Canal--this is an ecological convergence zone, where the subtropical vegetation of 'the low country' meets the upland forests more common in the Appalachians; the occasional alligator plies the waters around here, and it's the northern limit for both those giant reptiles and the epiphytic moss that gives these woods their sense of place...Soft on the feet, and soft green light all around... 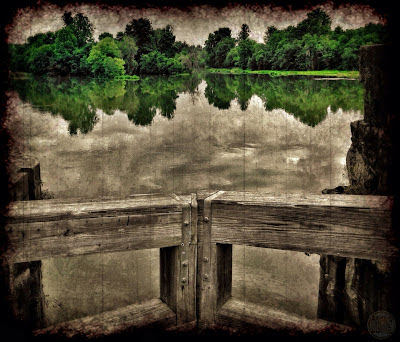 From the lock gates at the headwaters, it's about 5.5 miles (9 km) to the historic mills near downtown.
I took my iPhone with me on a run last Sunday morning; when I got down there, I spent a while photographing the quiet façades... 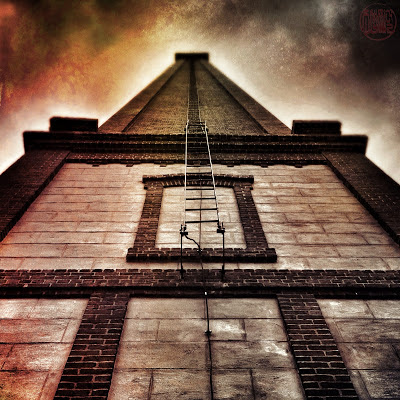 This 150-ft tall obelisk-smokestack is all that remains of the Confederate Powder Works--
during the Civil War, it was the second-largest gunpowder-producing facility in the world, the South's only source. The rest of the powder works was dismantled, but the chimney was allowed to remain standing as a memorial...

After the war, the Sibley Mill was built on the same site. 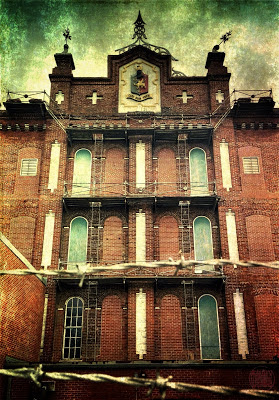 (hard to read, but the inscription at the top is "esse quam videri,"
Latin for "to be, rather than to seem")

It no longer produces tons of denim, but the turbines still produce hydroelectricity for the area.

(Incidentally, as you'll see--
lots of fun with photo-apps this week,
mainly snapseed, laminar, scratchcam, & mextures,
if you're interested.)

Next to the Sibley Mill is the King Mill, also from the 19th century--its central tower is remarkable for its Italianate architecture: 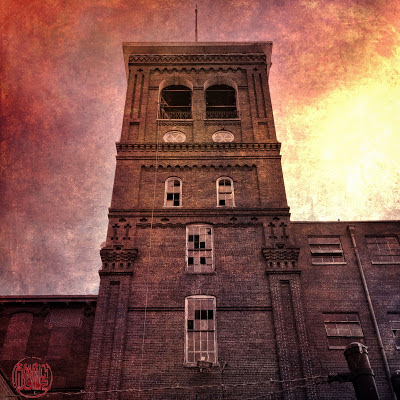 The missing panes in the windows seem to be 'speaking in code'...broken Italian, maybe?

On the other side of the canal, this little building caught my eye: 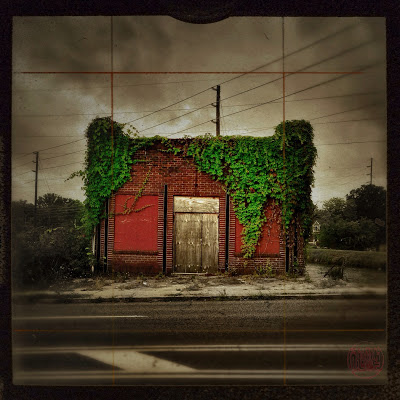 But not everything is in such a picturesque stage of benevolent decay. Just up the street is the well-preserved  Ezekiel Harris House--a planter's home that dates to the 1790's: 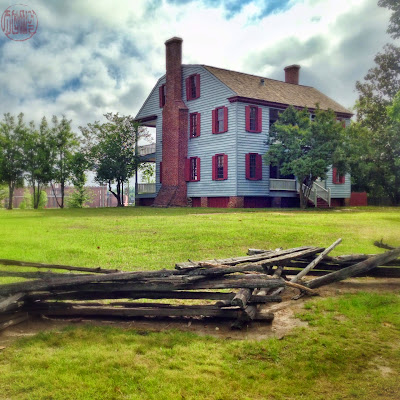 This area is still called 'Harrisburg,'

(Thanks to the Portlandia skit, I can hardly use the term 'local' anymore, but still...)

America may 'run on Dunkin',' but The South still swears by Krispy Kreme: 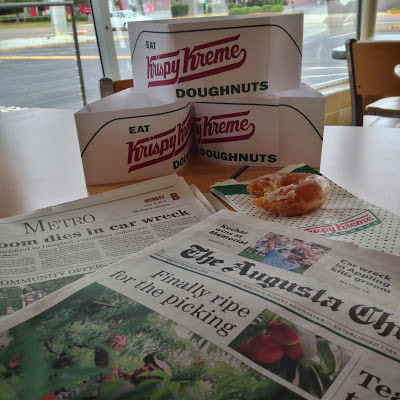 And while I had my doughnut,
the newspaper headlines announced this year's peach harvest...

...and around the corner from where my mother lives, a produce stand: 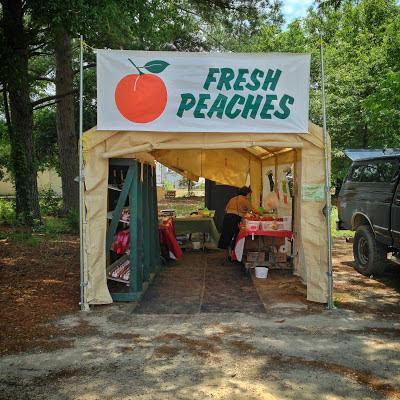 But we didn't just buy peaches;
we also got some cucumbers...
...and with help from the Chinese chives from my mother's backyard garden,
those cucumbers morphed into 'oh-ee soh-bah-ghee kimchi'
--a 'quick pickle' stuffed-cucumber kimchi: 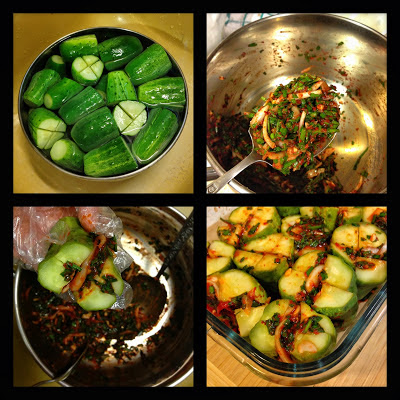 South-Korean in The South--so local. 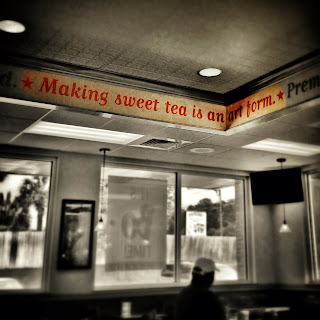 But I just can't drink the stuff anymore. It's not 'tea'--it's 'syrup.'
Or, to transcribe the proper local pronunciation--'surrp.'
And I just 'cain't' drink it no more...

A friend took me to a new burger-pub downtown,
where the beef and the eggs come from surrounding farms... 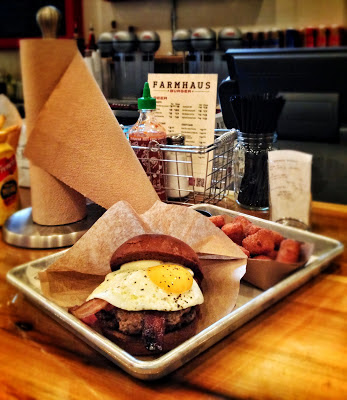 And those are sweet-potato-tater-tots. A revelation.
But why "FarmHAUS?" Nothing remotely German here;
gratuitous foreign spelling, but tasty.

'Feelin' good' about eating local?
Just up the street, this statue of  James Brown: 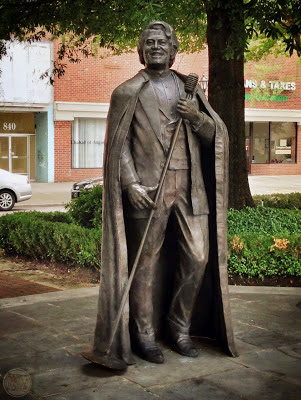 At the other end of the musical spectrum,
opera diva Jessye Norman comes from here as well.
An amphitheater on the Savannah River is named after her: 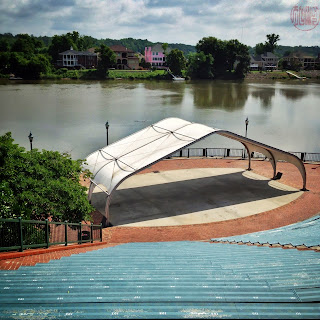 Up until the late 1990's, the South Carolina side of the river was still marshland;
now it's been drained and golf-coursed, lined with neo-Plantation McMansions.
Whoa, that's a pink house!

Another couple of blocks up Broad Street: 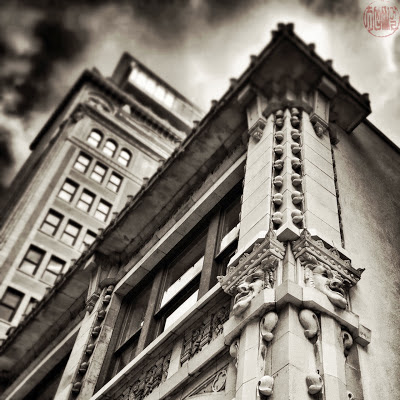 --the old Imperial Theater,
beneath the I.M. Pei-designed penthouse atop the Lamar Building.
Yes, the same I. M. Pei who designed the glass pyramid
in the courtyard of The Louvre in Paris.
Some around here call the top of this structure "The Toaster."

And a few blocks away, more old bricks for this scene: 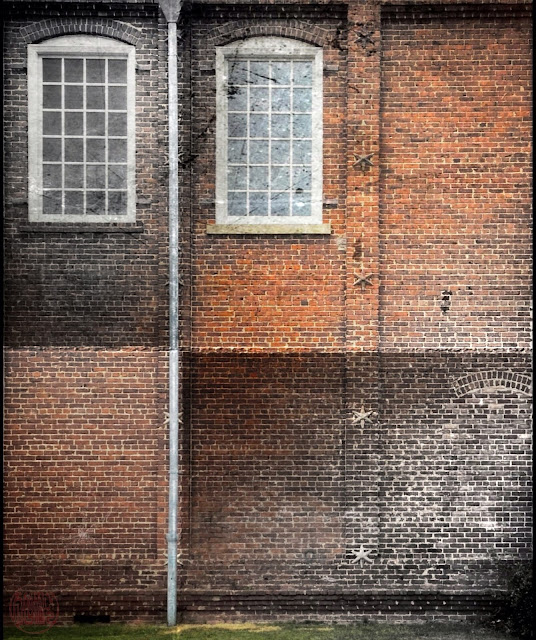 See the embedded stars? And there used to be another window there....this is part of the Old Iron Works which was incorporated into the new campus of the Davidson Fine Arts School...

(I know, I kinda iphone-camera-visually-obsessed over brick walls on this visit.)

A block up from that school is the Sacred Heart Cultural Center,
a deconsecrated church from the end of the 19th-century,
originally built for the Irish Catholic community in this bastion of Baptists: 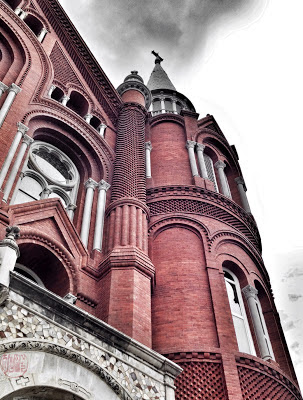 I've always loved the ornate brickwork on this neo-Romanesque façade...
No longer a church, but a fabulous place to rent for weddings...
...and when I was in high school, I played in a chamber music concert here.

Enough bricks for now. Back to my mother's house, with her garden...
...gardenias are flowering now--oh, that chest-filling heady scent--you can't help but slow down and inhale deeply when you pass by a bush in bloom...it is the trademark scent of a Southern summer night. 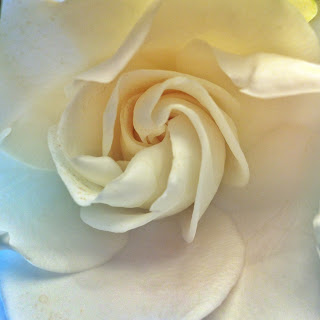 ...and the start for 'over-apping;' the bloom seemed evocative of a galaxy, so I decided to go astronomical... 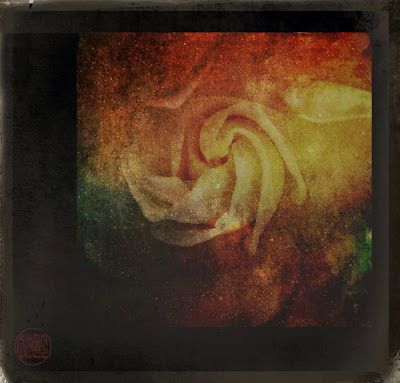 These, my mother calls 'four o'clock afteroon flower.' And sure enough, they open by late afternoon and close up the following morning just after sunrise: 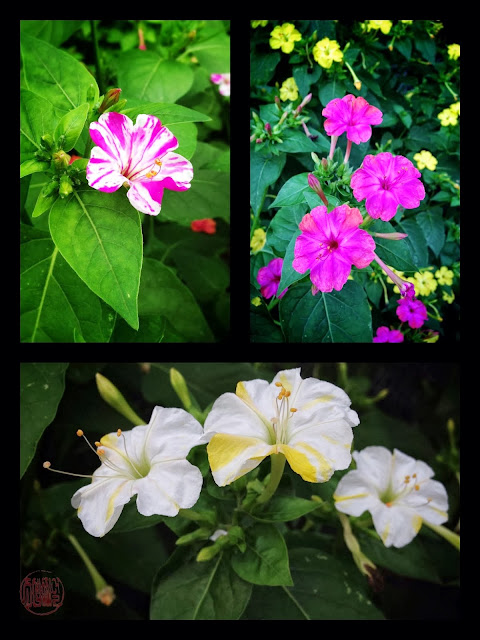 (These are native to Perú, but grow very well in the Southeast U.S.)

And here's what to do on a Saturday morning: 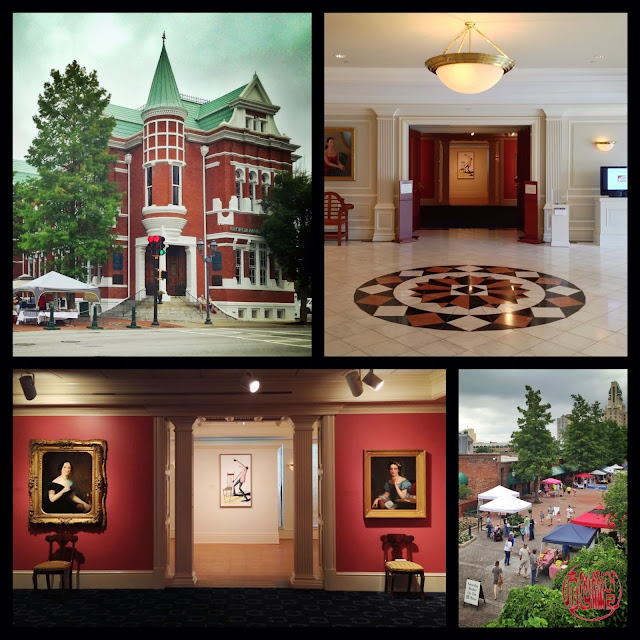 March through November, if you're in Georgia's second-oldest city on a Saturday morning, make your way to the river. Augusta's Riverwalk hosts a weekly farmer's market, and on this particular June morning: okra, cucumbers, peaches...artisan breads...BBQ, funnel-cake...After breakfast and browsing, walk a couple of blocks to the west on the brick esplanade above the Savannah River, then spend some time in The Morris Museum of Art--the nation's only museum dedicated to the visual arts of The South: Antebellum portraiture, depictions of the Civil War, contemporary self-taught artists, landscapes... 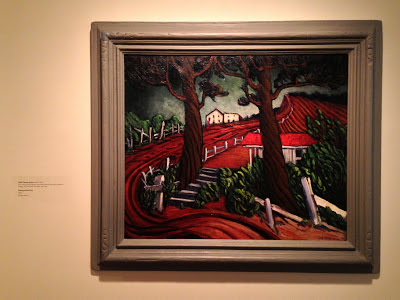 (including this, one of my favorites, "Georgia Red Clay" by Nell Choate Jones)

...and they'll let you stash your bag of farmers-market-produce in their coatroom while you enjoy the elegantly air-conditioned collection... 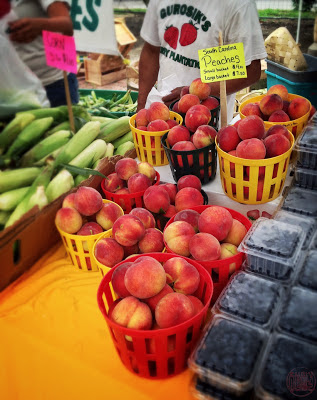 While walking back to the car from the museum,
I saw this 'accidental garden'
on the back wall of the old jail: 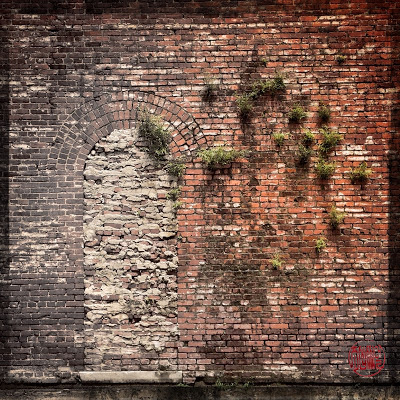 And I'm not done with bricks just yet--here's the old Pump House on the canal that I ran by a couple of mornings ago: 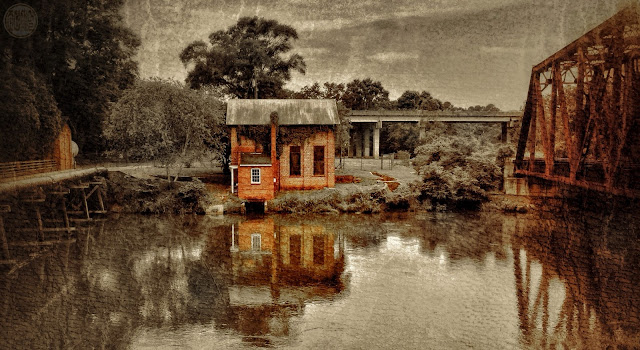 I obsess, but I do love the Canal and its trails and trees... 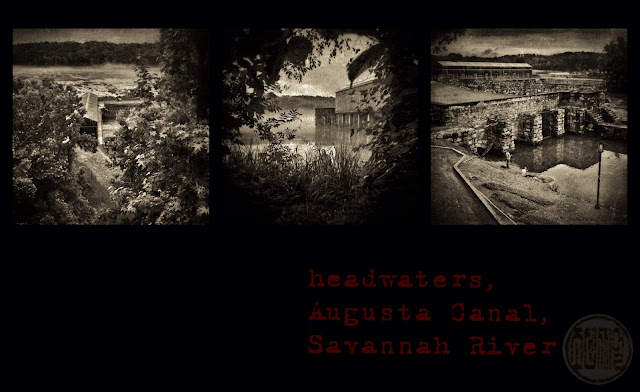 Time for bed and time to pack for tomorrow's flight...
(I miss 'my' saguaro-studded mountains.)

These aromatic leaves ("shiso" in Japanese, "ggaenip" in Korean) are a powerhouse of edible phytochemicals, and I grew up with them. I love them prepared any which way, but the 'funnest' (and least healthiest) way to eat them is...fried. This is The South, so it's an appropriate transplant. Dip these leaves in tempura batter then briefly in boiling oil, and they transform into crispy green treats; they're best straight from the source. 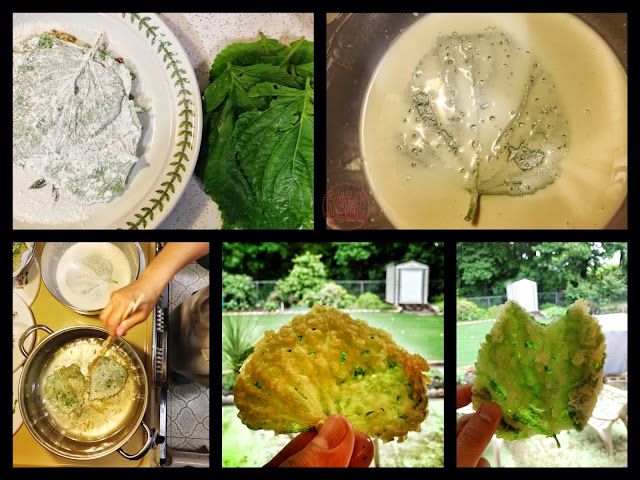 After eating these veggies, you'd better go for a RUN!
And the Canal's a great place to start...