I've liked deviled eggs ever since I can remember. My mother wouldn't make them often, but it was one non-Korean thing she learned to make soon after marrying my father. My wife can't stand them...so her mother loves making them...for me.

Fusion-food doesn't always work, but from a bi-racial point-of-view, it's almost always intriguing...

For a while I've been meaning to play with the basic recipe and add a Korean twist. I deliberately avoided googling "Korean deviled eggs"--I knew that it had probably already been done, but I wanted to entertain the illusion of 'inventing something' for a while longer...So this afternoon, wanting a cold snack after working a good part of the day in a non-air-conditioned classroom (THIS IS TUCSON!? COME ON, SCHOOL-DISTRICT, YOU KNOW SOME TEACHERS NEED TO BE AT SCHOOL AT LEAST OCCASIONALLY DURING THE SUMMER!!), and having a few boiled eggs in the fridge from the other evening--this was the day to try out the idea...

Here are the proportions of the ingredients for three eggs--all I had...but six deviled-egg-halves are plenty... 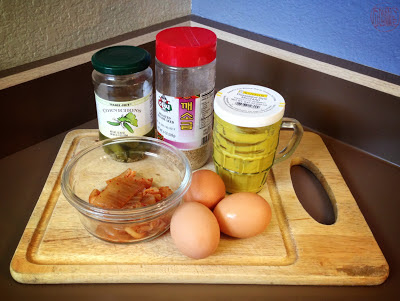 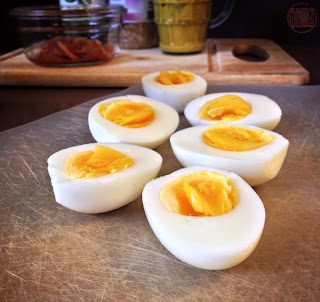 
3 egg yolks
1 tablespoon of finely diced kimchi;
(squeeze out the excess liquid
with a paper towel first)
2 diced cornichons
1 teaspoon of German mustard
(smooth, not grainy; this is
in lieu of mayonnaise)
1/2 teaspoon of either crème fraîche or mascarpone
(I know, sounds weird, but it worked)
1 teaspoon of roasted sesame seeds
1 teaspoon of gochu garu--Korean red chile
powder--it's bright red, but not as hot as
you might fear


Mix together all of the above ingredients in a bowl until smooth. Spoon the mixture carefully back into the eggs which have been cut in half lengthwise. Garnish with chopped scallions and a sprinkling of sesame seeds and the gochu garu. And then for a final touch on top, some fleur de sel would be nice--a change in texture and an extra bit of mineral saltiness. 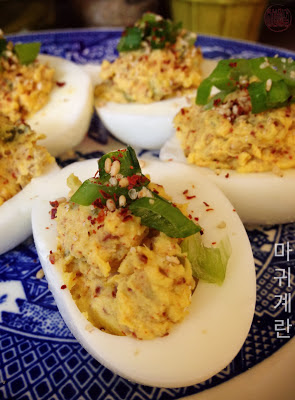 And that was my 'invention'...or so I thought. Now, if you do google 'Korean deviled eggs,' there are lots of variations already published out there. But maybe you heard it here first. Maybe.

Happy experimenting, (let me know what you come up with!) and bon appétit.


And why are they called 'deviled' anyway? Here's an explanation.

Yeah, weird.
And here it is, in English translation: