"Which Korea are you from?"...and a bit about "The Blue House"

With all of the recent goings-on on the Korean peninsula, my students have been asking me what I think about the situation. (They know that I am half-Korean, and even though I'm their French/Spanish teacher, as far as they're concerned, I'm their Asian expert.) Surprisingly, many also say to me: "Now, are you from North or South Korea?"

Hmm. I always thought it would be obvious--I mean, obviously I'm from the South--no one gets out of North Korea. Isn't it common knowledge that North Korea is the world's most closed country, a totalitarian personality-cult with gulags and famine in addition to its nuclear tests and million-man-strong army?

Then again--among my students in recent years, I've had kids who say things like "OMG, I thought Asia was a country in Africa!" So...I guess I shouldn't be surprised that they ask such questions. Language-curriculum aside, I've found myself giving impromptu lessons in NE Asian history to these Arizona high-schoolers...

In return, they tell me about this meme currently making the rounds: 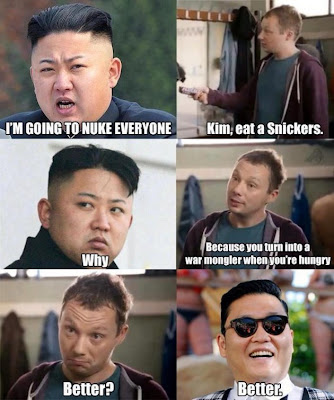 (http://weknowmemes.com/2013/04/kim-jong-un-eats-a-snickers/)
If only KimJongUn-morphing-into-Psy-due-to-a-candy-bar were truly just a laughing matter...

To be informed, check out this recent book:
"Nothing to Envy; Ordinary lives in North Korea" (came in out 2009), by journalist Barbara Demick; it was a finalist for the National Book Award...

The U.S. has "The White House," Argentina its "Casa Rosada,"
and Seoul--"The Blue House: Cheong Wa Dae."
The official residence of the S. Korean president sits on a mountainside above central Seoul:
Cheong Wa Dae (literally "The pavilion of blue tiles) is built on what was the site of a royal villa during the Goryeo dynasty (918-1392), before Seoul was established as the capital of the Joseon dynasty (1392-1910). The name comes from the old tradition of only royalty being allowed to use blue ceramic tiles on their residences...Now, even with a democratically-elected female president Park Geun-hye, the color of royalty is still important. 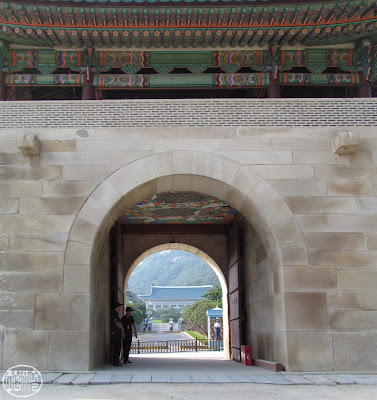 From the grounds of Gyeongbok-gung Palace, you can look through the north gate of the compound and see Cheong Wa Dae--in a leafy but heavily guarded neighborhood of Seoul: 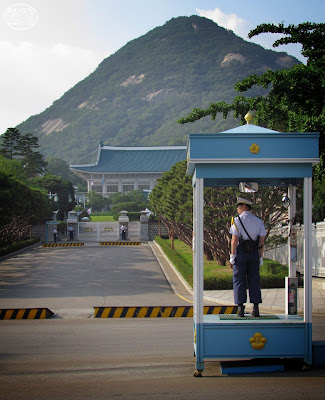 Not much is being said in the press in the U.S. about how the current state of affairs--bellicose threats, outrageous propaganda, etc. etc.--is very much a personal affair as well:

Park Geun-hye, the recently inaugurated S. Korean president, is the daughter of Park Chung-hee, who was the dictator of S. Korea from 1961 to 1979. During his rule, N. Koreans tried several times to assasinate him. So--current N. Korean leader Kim Jong Un's father, Kim Jong-il, actively tried to kill Park geun-hye's father. Her mother ended up being killed during one of those attempts. (Park Chung-hee did end up being assassinated in 1979, but not by the N. Koreans.) So, now, the grandson of the man behind the death of the mother of the current S. Korean president is in charge north of the border, breathing threat and murder...

What must the conversations inside Cheong Wa Dae be like these days?
(Incidentally, in 1968, dozens of N. Korean infiltrators got to within a few hundred yards of Cheong Wa Dae--they were stopped, but not before 28 N. Koreans, 68 S. Koreans, and 4 Americans were killed.)

This would make for a great political/historical TV-drama-series, wouldn't it? A country that had been united for a thousand years, divided--and now it's personal--two families, each controlling one half of the country, staring each other down...With over 70 million subjects' lives in the balance...
Crazy times.

So, "Cheong Wa Dae"--(pronunciation note--whenever you see 'eo' in a Korean word, think of a sound between 'uh' and 'oh;'so, something like 'chung wah deh' would sound WAY better than 'cheeyong wah day,' ok?)--the complex is open to the public for tours, but you have to apply at least three weeks ahead of time, with your passport information.

If you read Spanish,
here's an interesting Iberian perspective on
the street-vibe in S. Korea right now:
http://paelladekimchi.com/como-se-vive-el-conflicto-en-corea
(written by a Spaniard living in Busan;
his blog has become one of the
go-to Spanish language blogs for
information about Korea.)