As 'promised' a couple of postings ago,
below is the recipe for the latest in Mexican-Korean fusion food:
"Sonoran-hot-dog-kim-bap."
You saw it here FIRST.

Our friends invited us for dinner tonight, and as their Franco-Congolese daughter is a fellow Korean-and Mexican-food fan, I decided to finally turn my idea into reality and make these Mexican-Korean seaweed-and-rice rolls to bring with us...As the father is on a vegetarian diet, I modified my idea--thus the vegetarian hot-dogs and 'bacon' in this ingredient-photo: 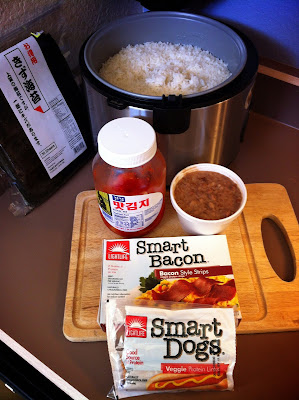 So, you need:
steamed sticky (short-grain) white rice
napa kimchi
Mexican refried beans--frijoles!,
(I got ours, take-out, from the 'Nico's' down the road)
hot-dogs cut into quarter-strips
bacon
(these 'smart bacon' strips
weren't the best, I gotta say...)
sheets of 'nori' seaweed
(also called 'kim' in Korean,
and 'laver' (?) in English)
green salsa 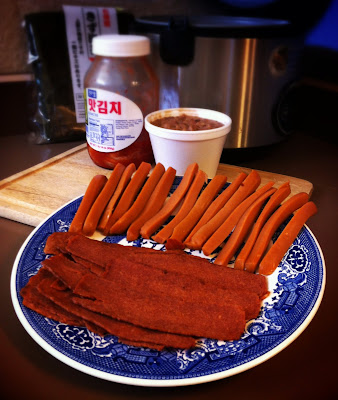 As I said, I'm not a big fan of this veggie-'bacon,'
but for tonight, it worked...
for savor and crunch, nothing can replace the swine source, though...

Spread the rice on the bottom third of a sheet of seaweed,
and spoon some of the salsa on to it: 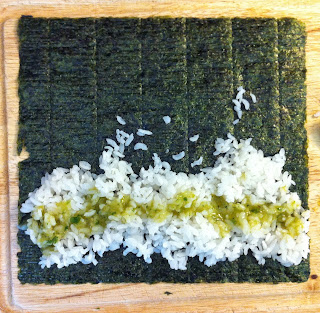 Then, spread a layer of the frijoles,
topping it with some of the bacon and then the hot-dog strips: 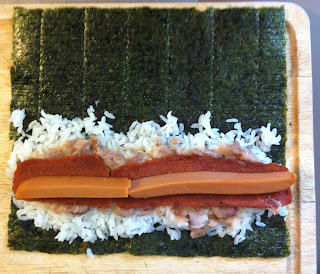 Chop the kimchi into narrow-strips (julienne, I suppose)
berfore placing on top of the meat: 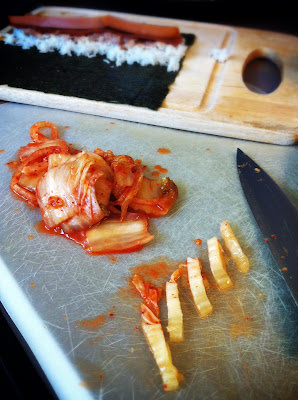 And then, after carefully rolling it tightly,
(moistening the end of the seaweed with a little bit of water,
so that it will stick better),
cut carefully into inch-long segments: 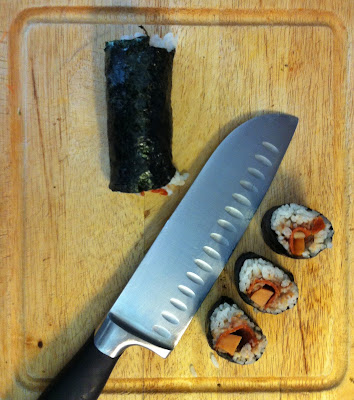 (Make sure your knife is sharp, or it will just squash the roll instead of slicing through it.)

Drizzle a bit of red or green salsa on the top of each roll, and voilà! 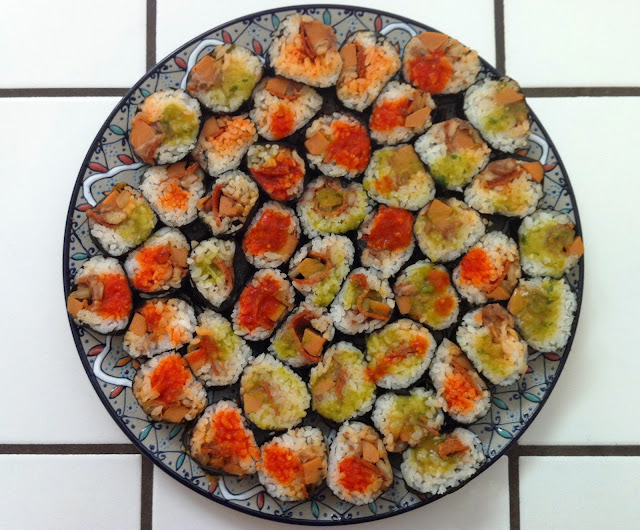 So, for a fusion-food term,
which do you like better,
"Korexican,"
or
"Mexicorean?"
...
or "comida de Seoul," perhaps?

For more about the origin and phenomenon of "Mexican hot dogs" or "Sonoran Hot Dogs" in Tucson,
check out this New York Times article from a few years ago:
http://www.nytimes.com/2009/08/26/dining/26unit.html

And for a 'traditional' kimbap recipe,
check out this:
http://www.seriouseats.com/recipes/2009/07/how-to-make-kimbap-korean-sushi-recipe.html

(And, again, please don't forget to go to condenasttraveler.com/dreamtrip from May 22 through June 11 to vote for the photo,"changing of the guard in Seoul," in the "Dream Trip" contest! JUST FOR VOTING--limit of once per day--YOU will be entered into a drawing for a private safari for two in Kenya! It's a win(maybe)-win(maybe)-situation, no?)