post-race...along with the t-shirt and medal, got a cold...

﻿A couple of mornings ago, at the 1/2-marathon starting line near AZ State University:

(photo from here)
This year instead of being four-thousand-somethingth, (out of 19-thousand)
I came in at two-thousand-somethingth...
Progress!
Five minutes faster than last year!
That was Sunday.
Monday I felt like I'd been hit by a truck. A nasty cold.
Evidently, this is normal. An article in "Runner's World" a few years ago said this:
When you push your body without interruption for more than 90 minutes, the stress hormones cortisol and epinephrine, which suppress immune function, gush out of your adrenal glands. Inflammatory cytokines, neutrophils, and monocytes (red-flag markers of physiological stress) take over your bloodstream, while your virus-fighting T cells and "natural killer cells" go into hiding. None of this is good. It doesn't make you sick on the spot, but for at least a few hours after the run, it makes your body as inviting to "bugs" as a porch light.
With tens of thousands of people milling about after I crossed the finish line, I guess it's no surprise I got some germs...But after sleep and soup, I feel much better today, just in time to be back in front of the classroom again...
The night before, while walking around downtown Phoenix,
we saw this brand new alleyway mural: 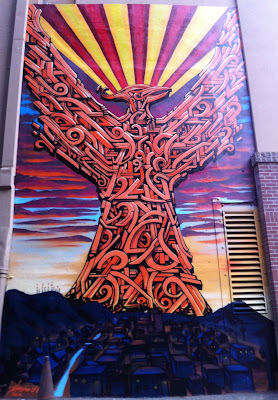 For being the nation's fifth largest city, the skyline isn't exactly distinctive: 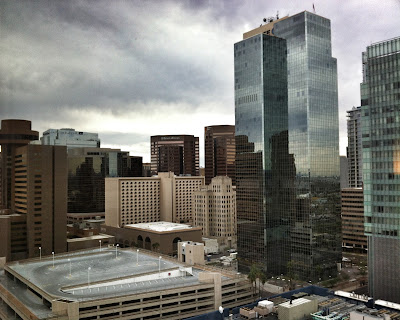 ...but still, it was nice to have a view of something from our hotel: the giant retractable roof open on the nearby stadium on a mild January night: 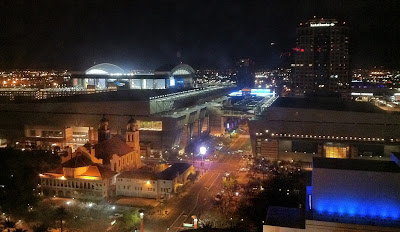 This is the 'Rock-n-Roll' marathon series...so after the race, there was a free concert:
the B-52's! 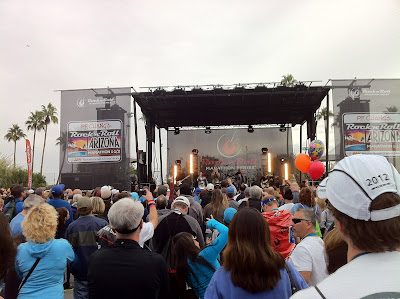 This year, free 'pace-tats' were handed out to runners: 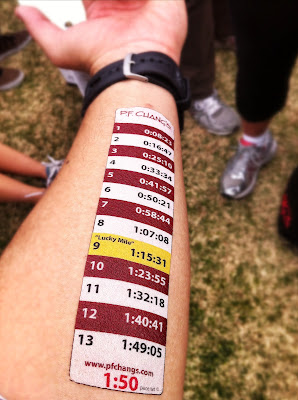 These temporary tattoos only came in ten-minute intervals; rather than having my one-mile splits slower than I wanted, I thought it would be good to have them faster than I'd planned...
It ended up helping me: my goal had been 1h55 (3 min faster than last year), but I ended up running the half-marathon in 1h53 min...
(Along the route, there were some funny 'inspirational' signs, including:
"Chuck Norris never ran a half-marathon.")
And of course--the medal and the t-shirt: 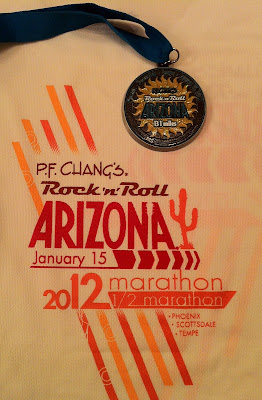 Picky, picky--I don't like the graphic design this year as much as last year's:

So...next year...t-shirt #3?
I hope so.
After I ran my first half-marathon last year, I wrote about why it was such a 'big-deal' for me...the reasons are the same, even now after running three half-marathons.

"Ask yourself: 'Can I give more?'. The answer is usually: 'Yes'."
-Paul Tergat, Kenyan professional marathoner
Posted by J. Cyr at 8:42 PM