...and today's fractal vegetable is:
...ROMANESCO.
(see photos below)
A member of the broccoli-cauliflower family, grown widely in northern Italy.
One of my students tried it when visiting family in Spain.
She'd taken a picture of it on her phone, which she showed to me and the rest of the class today.
I had to google it--wanted to know more about it...
Cool, eh?

And, the above, from this article: http://en.wikipedia.org/wiki/Romanesco_broccoli
I'm a fan of unusual foods and love the forms/shapes/colors of produce...but somehow I'd never seen/heard of this before! I'm totally fascinated...I wonder if you can buy it here? Surely, the foodie-fication of America has led to some farmers' markets somewhere to offer this edible sculpture? Any of you seen/eaten it before?

...and speaking of unusual foods--when living in Nicaragua, we were able to see a whole year-cycle of fruits/vegetables, including many things we'd never seen before, such as this: 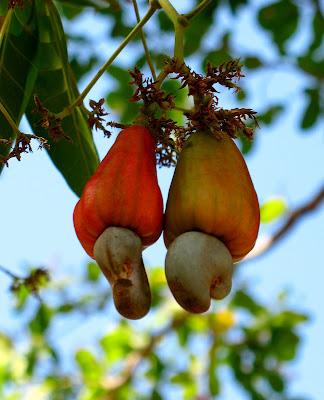 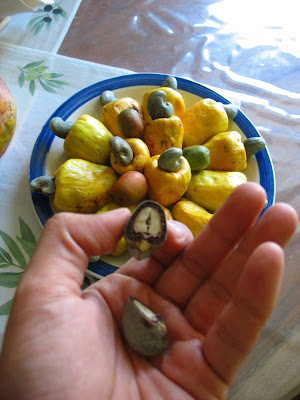 So. Now you know how cashews grow. In trees, each nut being inside the comma-shaped carapace on the bottom of a pendulous bell-pepper-esque fruit. (No wonder they're relatively expensive, eh?)

And...how to say 'cashew' en español?
Take your pick, depending on where you want to say it: