Vancouver to Seoul; 'flowers of geography'...

...a couple more days and the Winter Olympics will be over...S. & I, although by no means 'sports fans,' do enjoy watching the winter games, and with NBC scheduling to air its events for maximum viewership,
we've been staying up late almost every night....So, sleep-deprivation is almost at an end...


Seeing all the shots of Vancouver--aerials, panoramas--has made us somewhat nostalgic for the Pacific NW...inevitable, I guess...So I was looking through some old photos...


Vancouver is one of the most perfectly-situated (and youngest--founded only the 1880's) cities in the world: water and snow-capped forested mountains surrounding a forest of glass towers--on a human scale, though, unlike Manhattan where the 'tyranny of the vertical' can be de-humanizing; it's enough to make even Seattle, one of the novelist Henry James' "flowers of geography" (see below), envious...


But going back through some of the photos, one that truly struck me was one of my first impressions from my first time there--a daytrip, right after I'd moved to Seattle in the fall of 1997:

...a bakery window display in Vancouver's Chinatown. 'Mom and kids?'
BBQ-buns that honestly show what's inside?
Truth in food-advertising:
only in a Chinatown, eh?
(This photo was publixhed in today's local paper, by the way!)
...from that same trip, a faint rainbow over the city,
looking north from Queen Elizabeth Park: 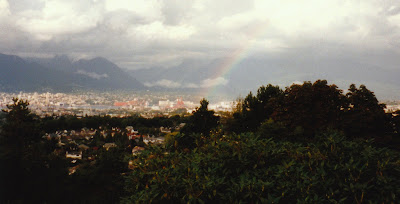 ...and a winter view (early 1998), of one of the lighthouses along Stanley Park, looking across the cold cold waters toward the mountains where many of the Olympic venues are located:

...and an 'official' aerial shot, from vancouver.ca:

(click on these for larger views)
...below, from thebeautifulbritishcolumbia.com

So, a bit of "BC-dreaming" on a winter's day, down here in Tucson...our local mountains are snowcapped, too, right now, with skiers on Mt. Lemmon, even! No ocean, though...no cosmopolitan pedestrian-friendly live/work/play skyscrapered neighborhoods here...
During the years we lived in Seattle, we always considered Vancouver like a more sophisticated older cousin--close enough to go for day-trips, but different enough to truly feel 'foreign.' As cool as it was, we did take a bit for granted, though--it's right there, we can go whenever we want...Now that we're in the Desert SW, a trip to Vancouver would be a major and expensive undertaking...Alas...
So, tomorrow, for a day-trip, we'll go visit some friends and a museum in...
(drumroll)...Phoenix.
Woohoo.
Yes, it is the nation's 'fifth-largest city' on paper.
Okay...and?...?
Incidentally, Henry James' 'flowers of geography' were: Naples, Capetown, Sydney, Seattle, San Francisco, Rio de Janeiro--all set in geographical settings that seem to have been made for future post-card-perfect cityscapes. When he traveled, Vancouver was not yet really an established 'city'--surely it would have been included in Mr. James' list...Here's a link to an essay by writer Jonathan Raban that appeared in the Seattle Times years ago; this is where I first came across Henry James' description.
So, readers/travelers out there--
what are your 'flowers of geography?'
============================================
In some ways, on my trips to Vancouver, I was reminded of Seoul--the high-rise residential living, the mountains always in view, the many Korean restaurants, even the language overheard on the sidewalks of downtown--although Chinese make up th majority of the city's east-Asian population, Koreans are not far behind...
...a few photos, then, of a city that's one of my 'flowers of geography:'
Seoul, the capital city of South Korea, framed by mountains and a river...
I say it not just because I was born there, but because of all the cities I've visited, its combination of ancient and post-modern, ultra-urban and mountain scenery is one of the best. Yes, it's densely populated, yes it has air-pollution, yes it's one of the largest urban conglomerations on the planet (perhaps even monstrously so)...but the compelling history of the place, along with the ever-present mountains make it a heady mix of non-stop human activity and timeless forested crags...along with the serene, wide Han river curving through it all.
(These photosare from www.skyscrapercity.com:) (and the following photo is courtesy of this website)

--this is the courtyard of the Throne Hall of Kyongbok Palace,
in downtown Seoul; a smaller version of The Forbidden City in Beijing...
...and from National Geographic, the following photos:
another of downtown Seoul's royal palaces, Tok-su-gung:

...the bustling Nam-dae-mun market--one of the city's centers of commerce since medieval times, now tucked into alleyways behind skyscrapers:

...from silk handkerchiefs to 'exotic' edibles:

...a Samsung electric car in front of one of the city's downtown hotels:

(Yes, I have a bit of free time this morning
to be posting all these images:
a bit of armchair travel via the Internet...
It's a school-holiday in Tucson:
Rodeo weekend,
a world away...)
Posted by J. Cyr at 8:58 AM