I'm always one for learning new factoids.
Especially during my lunch hour--factoids that I can then use for an impromptu cultural-history-lesson in my fourth-period class...
If you're about to have a 4-day-weekend...Enjoy!

========== from today's New York Times ================
November 26, 2008
Op-Ed Contributor
A French Connection
By KENNETH C. DAVIS
TO commemorate the arrival of the first pilgrims to America’s shores, a June date would be far more appropriate, accompanied perhaps by coq au vin and a nice Bordeaux. After all, the first European arrivals seeking religious freedom in the “New World” were French. And they beat their English counterparts by 50 years. That French settlers bested the Mayflower Pilgrims may surprise Americans raised on our foundational myth, but the record is clear.
Long before the Pilgrims sailed in 1620, another group of dissident Christians sought a haven in which to worship freely. These French Calvinists, or Huguenots, hoped to escape the sectarian fighting between Catholics and Protestants that had bloodied France since 1560.
Landing in balmy Florida in June of 1564, at what a French explorer had earlier named the River of May (now the St. Johns River near Jacksonville), the French émigrés promptly held a service of “thanksgiving.” Carrying the seeds of a new colony, they also brought cannons to fortify the small, wooden enclosure they named Fort Caroline, in honor of their king, Charles IX.
In short order, these French pilgrims built houses, a mill and bakery, and apparently even managed to press some grapes into a few casks of wine. At first, relationships with the local Timucuans were friendly, and some of the French settlers took native wives and soon acquired the habit of smoking a certain local “herb.” Food, wine, women — and tobacco by the sea, no less. A veritable Gallic paradise.
Except, that is, to the Spanish, who had other visions for the New World. In 1565, King Philip II of Spain issued orders to “hang and burn the Lutherans” (then a Spanish catchall term for Protestants) and dispatched Adm. Pedro Menéndez to wipe out these French heretics who had taken up residence on land claimed by the Spanish — and who also had an annoying habit of attacking Spanish treasure ships as they sailed by.
Leading this holy war with a crusader’s fervor, Menéndez established St. Augustine and ordered what local boosters claim is the first parish Mass celebrated in the future United States. Then he engineered a murderous assault on Fort Caroline, in which most of the French settlers were massacred. Menéndez had many of the survivors strung up under a sign that read, “I do this not as to Frenchmen but as to heretics.”
A few weeks later, he ordered the execution of more than 300 French shipwreck survivors at a site just south of St. Augustine, now marked by an inconspicuous national monument called Fort Matanzas, from the Spanish word for “slaughters.”
With this, America’s first pilgrims disappeared from the pages of history. Casualties of Europe’s murderous religious wars, they fell victim to Anglophile historians who erased their existence as readily as they demoted the Spanish settlement of St. Augustine to second-class status behind the later English colonies in Jamestown and Plymouth.
But the truth cannot be so easily buried. Although overlooked, a brutal first chapter had been written in the most untidy history of a “Christian nation.” And the sectarian violence and hatred that ended with the deaths of a few hundred Huguenots in 1565 would be replayed often in early America, the supposed haven for religious dissent, which in fact tolerated next to none.
Starting with those massacred French pilgrims, the saga of the nation’s birth and growth is often a bloodstained one, filled with religious animosities.
In Boston, for instance, the Puritan fathers banned Catholic priests and executed several Quakers between 1659 and 1661.
Cotton Mather, the famed Puritan cleric, led the war cries against New England’s Abenaki “savages” who had learned their prayers from the French Jesuits.
The colony of Georgia was established in 1732 as a buffer between the Protestant English colonies and the Spanish missions of Florida; its original charter banned Catholics.
The bitter rivalry between Catholic France and Protestant England carried on for most of a century, giving rise to anti-Catholic laws, while a mistrust of Canada’s French Catholics helped fire many patriots’ passion for independence.
As late as 1844, Philadelphia’s anti-Catholic “Bible Riots” took the lives of more than a dozen people.
The list goes on.
Our history is littered with bleak tableaus that show what happens when righteous certitude is mixed with fearful ignorance. Which is why this Thanksgiving, as we express gratitude for America’s bounty and promise, we would do well to reflect on all our histories, including a forgotten French one that began on Florida’s shores so many years ago.
Kenneth C. Davis is the author of “America’s Hidden History: Untold Tales of the First Pilgrims, Fighting Women and Forgotten Founders Who Shaped a Nation.”
===== and a cartoon from today's http://www.iht.com/ ===== 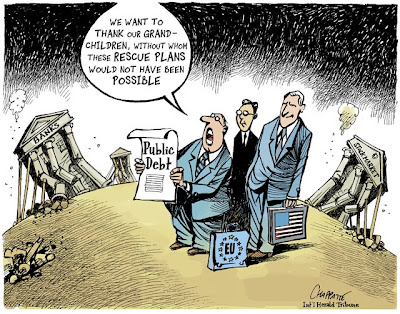 And, finally...courtesy of The Washington Post, I found a 'reprint' of one of the best "franglais" columns ever, by Art Buchwald:

This confidential column was leaked to me by a high government official in the Plymouth colony on the condition that I not reveal his name.
One of our most important holidays is Thanksgiving Day, known in France as le Jour de Merci Donnant .

Le Jour de Merci Donnant was first started by a group of Pilgrims ( Pelerins ) who fled from l'Angleterre before the McCarran Act to found a colony in the New World ( le Nouveau Monde ) where they could shoot Indians ( les Peaux-Rouges ) and eat turkey ( dinde ) to their hearts' content.

They landed at a place called Plymouth (now a famous voiture Americaine ) in a wooden sailing ship called the Mayflower (or Fleur de Mai ) in 1620. But while the Pelerins were killing the dindes, the Peaux-Rouges were killing the Pelerins, and there were several hard winters ahead for both of them. The only way the Peaux-Rouges helped the Pelerins was when they taught them to grow corn ( mais ). The reason they did this was because they liked corn with their Pelerins.

In 1623, after another harsh year, the Pelerins' crops were so good that they decided to have a celebration and give thanks because more mais was raised by the Pelerins than Pelerins were killed by Peaux-Rouges.

Every year on the Jour de Merci Donnant, parents tell their children an amusing story about the first celebration.

It concerns a brave capitaine named Miles Standish (known in France as Kilometres Deboutish) and a young, shy lieutenant named Jean Alden. Both of them were in love with a flower of Plymouth called Priscilla Mullens (no translation). The vieux capitaine said to the jeune lieutenant :

"Go to the damsel Priscilla ( allez tres vite chez Priscilla), the loveliest maiden of Plymouth ( la plus jolie demoiselle de Plymouth). Say that a blunt old captain, a man not of words but of action ( un vieux Fanfan la Tulipe ), offers his hand and his heart, the hand and heart of a soldier. Not in these words, you know, but this, in short, is my meaning.

"I am a maker of war ( je suis un fabricant de la guerre ) and not a maker of phrases. You, bred as a scholar ( vous, qui etes pain comme un etudiant ), can say it in elegant language, such as you read in your books of the pleadings and wooings of lovers, such as you think best adapted to win the heart of the maiden."

Although Jean was fit to be tied ( convenable tres emballe ), friendship prevailed over love and he went to his duty. But instead of using elegant language, he blurted out his mission. Priscilla was muted with amazement and sorrow ( rendue muette par l' etonnement et la tristesse ).

At length she exclaimed, interrupting the ominous silence: "If the great captain of Plymouth is so very eager to wed me, why does he not come himself and take the trouble to woo me?" ( Ou est-il, le vieux Kilometres? Pourquoi ne vient-il pas aupres de moi pour tenter sa chance ?)

Jean said that Kilometres Deboutish was very busy and didn't have time for those things. He staggered on, telling what a wonderful husband Kilometres would make. Finally Priscilla arched her eyebrows and said in a tremulous voice, "Why don't you speak for yourself, Jean?" ( Chacun a son gout. )

And so, on the fourth Thursday in November, American families sit down at a large table brimming with tasty dishes and, for the only time during the year, eat better than the French do.

No one can deny that le Jour de Merci Donnant is a grande fete and no matter how well fed American families are, they never forget to give thanks to Kilometres Deboutish, who made this great day possible.