'Eternal Spring'/TV crowds/urban space/Fox & Crow
First, a 'shout-out' to our friends E-- & A--, who are about to leave (tomorrow) on a jaunt through central Mexico: ¡BUEN VIAJE!
Ahh, 'cities of eternal spring'...so many cities in Latin America have been so named--the climates of several cities in highland Mexico, Antigua in Guatemala, San José in Costa Rica, Medellín in Colombia, Cuenca in Ecuador, Trujillo and Arequipa in Peru, and others... 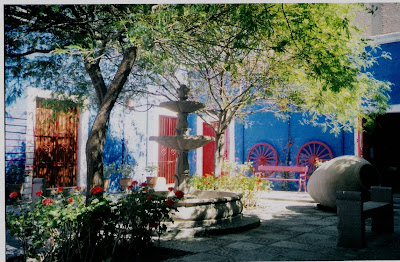 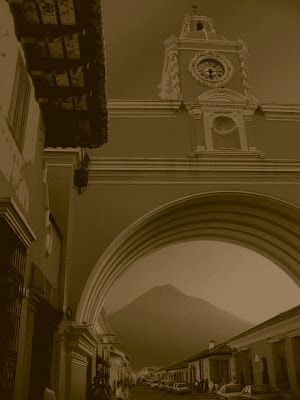 For a couple of days now, Tucson has felt like that--October's long stretch of days in the 90's has come to an end, with chilly 40-degree-dawns and afternoons in the mid-70's: perfecto. Afternoon jogs include sightings of the occasional vermilion flycatcher, a hawk or two, and the great white heron who has settled into his pond at Fort Lowell Park...This is Tucson at its outdoors-best--its 'second spring' after the warm early fall...
Not 'eternal' by any means, this springlike weather in Tucson....but neither is summer permanent here, as many mistakenly think...(Incidentally, fifty years ago today, exactly, there was a freak snowstorm here that dumped half a foot of snow on the city and even killed a few boyscouts up in the mountains in blizzard-like conditions...)
My wife and I are coming to our peace with the fact that Tucson is sorely lacking in pedestrian urban culture. Okay. So be it. But being able to be outdoors under blue, relatively unpolluted, skies almost all year...with good (as in non suburban 'tex-mex-ish') Mexican food and coyotes and runners darting through neighborhoods with the mountains all around...appreciate what you have, 'bloom where you're planted,' right?
So, being (trans)planted here in Arizona, and having just gone up to Phoenix this past Sunday to visit friends, I found Tuesday night's concession-speech by Senator John McCain interesting--specifically, for its setting, at the Arizona Biltmore resort in Phoenix, which I have driven by...Posh and well-watered exclusivity.
During the concession-speech, I couldn't help but notice, as the TV cameras panned the audience, how 'lily-white,' as a British ex-pat friend put it, the crowd was. Seriously, not a single Hispanic or African-American or Asian face appeared for network television.
And then, across the country to Chicago's Grant Park, its lakefront 'front yard'--the people were very visibly multiethnic in Senator Obama's audience, and in a public, non-resort, space.
TV-camera chance? It does make you wonder what the respective parties are trying to project--although, I guess we don't have to 'wonder,' since it's all so, well, visible...
Chicago's Grant Park is one of urban America's great public spaces...a concept that escapes most city planners in this country...What would Tucson's equivalent be? Nada. Even Seattle, with its trademark Space Needle--the space underneath it is really to small to be 'the city's frontyard.' Back to Tucson--its 'front' approach--what you see when you drive in from the airport, or in from off the Interstate highways--it's terrible! (sad to say...)
Yeah, not every place can have a Champs-Elysées, Brandenburg Gate, or Central Park.
I guess I'll take my cactus-sunsets and be content.
=====================
On a completely different note,
click here (http://www.youtube.com/watch?v=38rYG8jZDBs),
if you would like to see a sock-puppet version of the XVI-century French fable,
Le Corbeau et Le Renard (The Crow & The Fox)
recorded earlier today, here in Tucson.
Pas parfait, mais authentique! ...et, au moins, les ados se sont amusés...