The four common factors...
The four common factors of most rattlesnake-bite-victims--wanna know what they are? We learned them yesterday at an exhibit/demonstration at the Arizona Sonora Desert Museum, where we took our out-of-town guests.
I'll get around to it in a minute...
This past weekend, some old friends came to visit--their first time to Arizona. So in addition to the obligatory culinary introduction to cheese crisp and Sonoran-style hot dogs washed down with horchata, we did the de rigueur drive over Gate's Pass, among the Saguaros on the way to the Desert Museum. 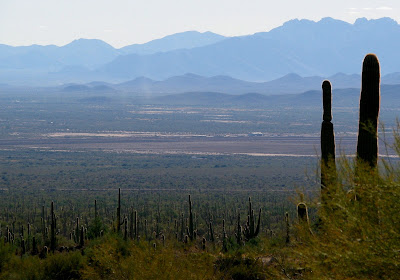 One animal I'd never noticed before--the tropical margay (tigrillo in Spanish), a nocturnal feline--a kitten-faced small jaguar-like animal with tremendous eyes that lives as far north as the southern edge of the Sonoran desert: 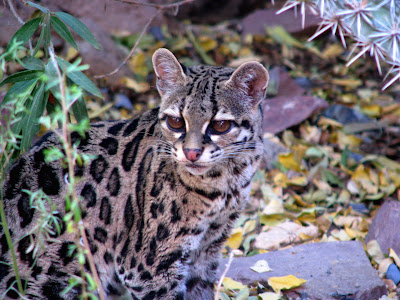 ...and, of course, more familiar creatures, the park's most famous residents; the mountain lions, whose exhibit has a thick glass window up in the craggy nook that allows visitors catnap views like this one: 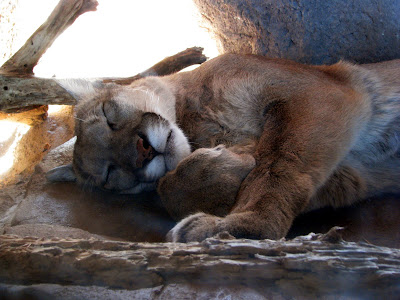 ...from cats to birds, now. Extreme southeastern Arizona--the Chiricahua mountain range--is the northernmost habitat limit for certain kinds of parrots. Very few, if any, remain (alas), but here's an example: 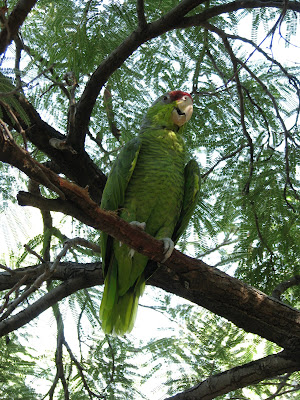 On a couple of our past visits, this guy has spoken, entertaining the tourists in the aviary...Yesterday he was silent, though.

I haven't had time to look these next couple of guys up, (maybe a more audobonically-aware reader can help us out?) but they sure are vivid: 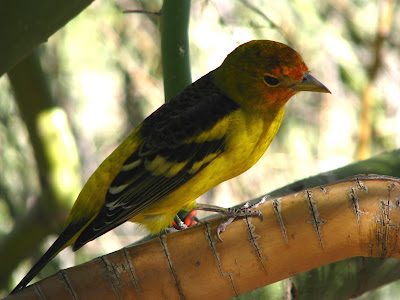 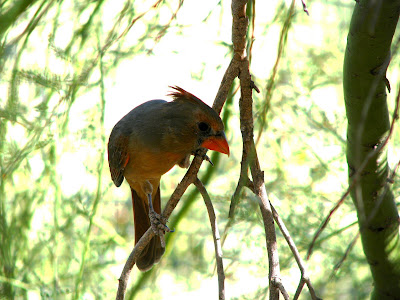 ...on to reptiles. We attended a lecture/demonstration on Gila monsters and rattlers. Gila monsters are one of only two truly venomous lizards in the world: 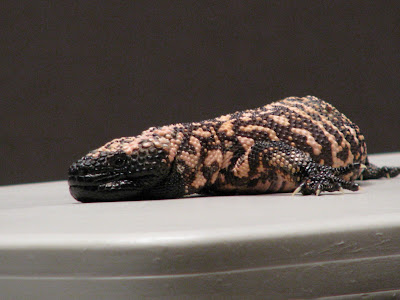 If you get bit by one, and can't detach it from your body, you're supposed to make your way to the Emergency room, where the staff will pry the gnawing critter off you. Then--you'll be ticketed. Seriously. These slow guys only bite in defense. If you get bit, it means you were harrassing it. And it's a protected species, so you'll be fined. Double owie.

They spend approximately 90% of their lives underground, so seeing them is a special occasion. About a year ago, I saw my first (and only) Gila in the wild; I was on a walk in Sabino Canyon with a friend visiting from France, and within one half-hour, he got a wildlife show: we saw the Gila monster, a rattler, several deer, many cottontail and jackrabbits, and roadrunners.

Okay, so now--I arrive at 'the four common factors.' As fearsome as rattlesnakes are, statistically you are more likely to be in a plane crash than to be bit by a rattlesnake, who will only ever bite in self-defense. The actual factual four common characteristics, now, that most rattlesnake victims share, according to anecdotal evidence from medical caregivers:

1. They are male. 2. They are tattooed. 3. They are not in possession of all their teeth. 4. They've been drinking beer.

'Seriously, I can't make this stuff up folks', the herpetologist-presenter told the laughing audience. 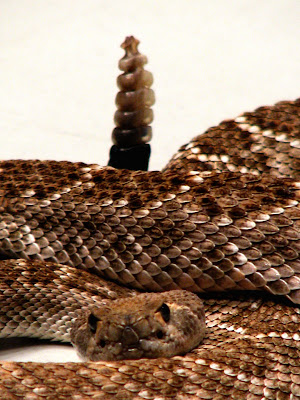 Hearing that profile, I felt pretty safe, then. But it did sober us, especially my wife, as we thought back to her close (one and only, so far) encounter with a rattler back in the spring...

A few more factoids about rattlesnakes--you canNOT tell their age by counting the segments on their rattles; that's a myth. And, unlike most reptiles, they don't lay eggs; they give birth to live young. And the average cost for each little vial of anti-venom, in case you're interested in medical costs, is three THOUSAND dollars. The average number of vials of anti-venom needed to treat a bite-victim: TWENTY. (All the rattlesnake anti-venom that is used in the US is manufactured in Britain, incidentally.)

From the deadly to the cute. Come on, you gotta admit it: 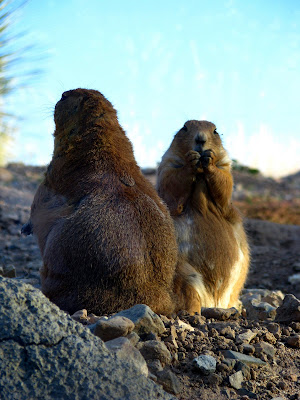 Prairie-dogs. Common in much of the Western U.S. Formerly common in the higher-elevation grasslands of Arizona; now extinct in the wild here.

And, tonight's last shot, taken this afternoon when I got home; the eastern sky was dotted with clouds and a few bands of isolated rain trying to make it to the ground, but evaporating before getting even halfway to the ground. The Apaches used to call this phenomenon "walking rain"...Yep, the air is just that dry right now. 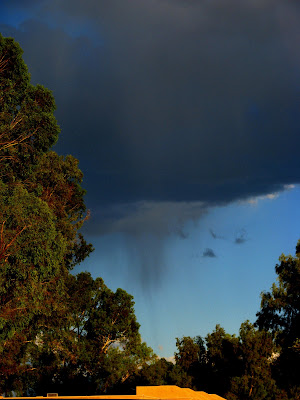