These four P's DO have a logical link;
may I ask for your patient perusal, please...

So, the other day, when I was looking at him while his head feathers were fluffed up,
I thought--hey, that reminds me of Kim Jong-Il--the reclusive and bizarre dictator of North Korea.who inherited the throne from his father Kim Il Sung...in his country's personality cult, he was referred to as 'Great Leader,' ergo, his son, logically, must be called "Dear Leader"...
He must have the strangest hair-do of any head of state today--witness the state of his head: 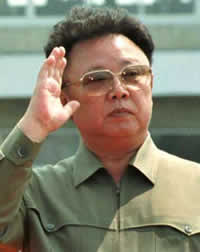 So, as a joke, and to my wife's bemusement,
I began squawking 'dear leader' to our little bird--especially when he would look like this: 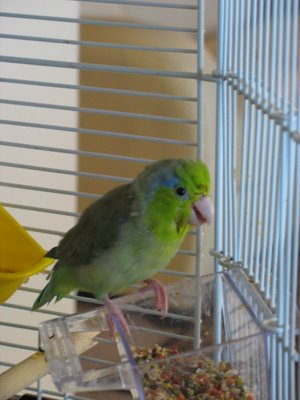 yes, he looks a bit crazed...all the more reason to be reminded of the North Korean dictator, as he postures in Pyongyang, his capital city...

And then just a couple of days ago--surprise!--Paquito pronounced the phrase--in a high-pitched repeated recitation: de-ah lea-dah! deah leadah! deah leadah! deah leadah!
Yes, I know--resemblance is in the eye of the beholder.
But a parrotlet that, ahem, parrots, North Korea's party line, is quite amusing.
(Disclaimer to Homeland Security here:
I IN NO WAY SUPPORT NOR SYMPATHIZE WITH NORTH KOREA!
PLEASE HAVE A SENSE OF HUMOR!!! I AM SIMPLY POINTING OUT A PASSING RESEMBLANCE...
I AM COMPLETELY POLITICALLY NEUTRAL IN A MOST BENIGN WAY!!
I HAVE PARROTS,THERE I AM SLIGHTLY WEIRD...BUT HARMLESS!!)

So, now on to Public Radio.
(The link between Pyongyang and NPR is this:
I listen to NPR, therefore I am informed about international goings-on, including things North Korean.)
There.
Now, yesterday, while listening to KUOW, NPR's local affiliate, there was a talk show mentioning, among other things, that a recent study concluded that Seatle is America's 'most literate city.'
(That 'literateness' must be one reason why, evidently, I insist on writing with numerous subordinate clauses, this being, parenthetically, an example thereof. Call it peer pressure...)

The self-congratulatory tone of some of the people calling in being annoying, I decided to call in--my first time ever trying to talk on a radio-call-in-talk-show--and they took my call!
I had my 30 seconds of local Nerd-Power-Radio fame.
I don't recall exactly what I said, but it was something to the effect of, 'okay, we might enjoy that we live in a 'literate city,' but don't let it go to our head--oh we're so educated, oh we're so literate--let's not let the findings of this 'study' nurture a self-superiority complex...'
Anyway...

To get another point of view on the local 'literate' pulse,
read this column here (entitled "Ask an uptight Seattleite"), from where I copied the following drawing.
(all due credit to The Seattle Weekly.)
As a neo-Northwesterner, I find the caricature to be right on: 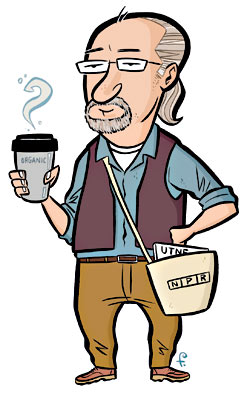 Let's start with the shoes--suitable for hiking, no doubt, and probably Gore-tex. (weather update--we had a WINDstorm last night, power is out to 700,000 people as I type this, and schools are cancelled...) The NPR-tote-bag is a must, because, as a 'literate' person with a thirst for news, the only right thing to do is be a contributing member, which fact one can subsequently advertise with the 'gift.' And inside that (hemp fiber?) bag, full of reading material, naturally, one must have Utne reader magazine, which you can pull out when you stop for your organic soy latte made by a multiply-pierced barista at a NON-Starbucks establishment, to ensure onlookers that you don't allow pre-digested pablum, such as Fox 'news', to bias your westcoastworldview...which is seen through small de rigueur wire-rimmed glasses...

Living in such a literate place, I have been surprised, then,
by the occasional playing out of the following dialogue, which I am not making up:
person asking question:
So, where did you live last year?
me, replying:
In Nicaragua.
person asking question, earnestly:
Ah, Nicaragua...(thoughtful pause)..now, where in Africa is Nicaragua?
me, suppressing natural reflex to express, facially, my surprise at the geographical non-awareness:
Umm...actually, it's in Central America...

In all seriousness and sincerity, my point here is not to make fun, but just to point out how 'literate' we are here...
No, really, seriously--this shows how geography and world-awareness are not taught in schools here.
Washington state, in fact, does not even require world history for high school graduation. (gasp of horror!) So literate. You have to have Washington history, ( all 150 years of it ) and US Government...but the rest of the world, well, you know, if you just listen to NPR and browse at Barnes & Noble once in a while, you'll get what you need...you know...

Okay. So Nicaragua...
and my fourth P for today's posting: Poinsettias: 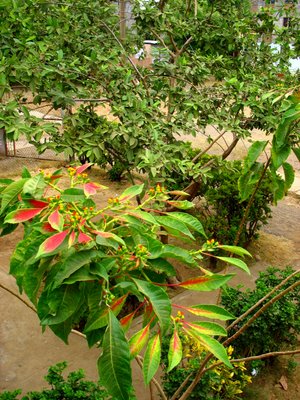 A year ago, that was the view out our second-floor front-door in Nicaragua: a tree-size poinsettia, in its natural habitat. (Behind it is a guava tree. Yes. I know. An excuse for a gratuitous Nicaragua photo...but hey, there are literate people out there who don't know that poinsettias are tree-sized plants in their tropical homes, not just foil-wrapped December-décor...)

And while Nicaragua--and Africa--are on the brain, here are a couple of book reccomendations (remember--literate!!) if anyone wants to know more about where Nicaragua is not. I just finished them:

( from Amazon.com)--King Leopold of Belgium, writes historian Adam Hochschild in this grim history, did not much care for his native land or his subjects, all of which he dismissed as "small country, small people." Even so, he searched the globe to find a colony for Belgium, frantic that the scramble of other European powers for overseas dominions in Africa and Asia would leave nothing for himself or his people. When he eventually found a suitable location in what would become the Belgian Congo, later known as Zaire and now simply as Congo, Leopold set about establishing a rule of terror that would culminate in the deaths of 4 to 8 million indigenous people, "a death toll," Hochschild writes, "of Holocaust dimensions." Those who survived went to work mining ore or harvesting rubber, yielding a fortune for the Belgian king, who salted away billions of dollars in hidden bank accounts throughout the world. Hochschild's fine book of historical inquiry, which draws heavily on eyewitness accounts of the colonialists' savagery, brings this little-studied episode in European and African history into new light.

and A Continent for the Taking, by Howard W. French

( From Publishers Weekly)--Although both tragedy and hope are mentioned in the subtitle, this work of reportage on Africa focuses more on the former than the latter. French was first captivated by Africa after college, in 1980, when he joined his parents and siblings in Ivory Coast. Taken by the pride and beauty he found on the continent, he became a journalist there, eventually serving as a bureau chief for the New York Times. His strength as a reporter is evident as he takes the reader across the continent, recounting in vivid detail the genocide in Rwanda and the AIDS and Ebola outbreaks. His prose is evocative without being melodramatic in describing the suffering he saw. The "powerful and eerily rhythmic" wailing of those who had lost loved ones to the Ebola virus "was painful to hear, and clearly bespoke of the recent or imminent deaths of loved ones." French is just as eloquent discussing his ambivalence about covering African crises after criticizing other journalists for their pack mentality in focusing on such crises rather than on giving a more rounded picture of life on the continent. In addition to disease and murder, French focuses his book on Africa's other plague: corrupt tyrants. While his insights into Zaire's Mobutu and Congo's Laurent Kabila are valuable, like many other writers on Africa French excoriates the "treachery and betrayal of Africa by a wealthy and powerful West." But providing some ways to improve life thereâ€"to give Africans some hopeâ€"is not so easy. As his book shows, French might be exactly the kind of seasoned Africa observer who could help point the way.

Solomon of old had it right: 'to the making of many books there is no end, and much devotion to them is warisome to the flesh.'

May we all go out and live our literate-enough-but-not-overly-so lives.