fusion frittata, unexpected orchards and tastes, and fall makes its first appearance in the canyon...

It's inevitable: around the beginning of every school-year, I come down with whatever the students are sick with--some kind of cold or flu...this year it waited until mid-September, so here I am, at home, malade, enfermo, krank...

So, time to post some recent minutiae after the last entry--the shameless vote-requests from two and a half weeks ago. Alas, S. and I are not going to be finalists in that travel-photo-contest this year. One less thing to worry about...But thanks for your support!

=============
So, our recent fusion-food experiment...
My wife wasn't convinced this would work, at first...She was reluctant to try a Korean-Italian frittata. 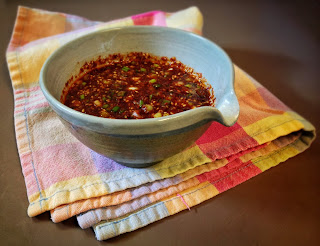 ...and I had seasoned some spinach with it, and I thought that the spicy spinach would be a good addition to a frittata...So I squeezed the excess liquid out of the spinach, and we added it to the potato-onion-mushroom mixture that we sautéed and then poured the eggs over. 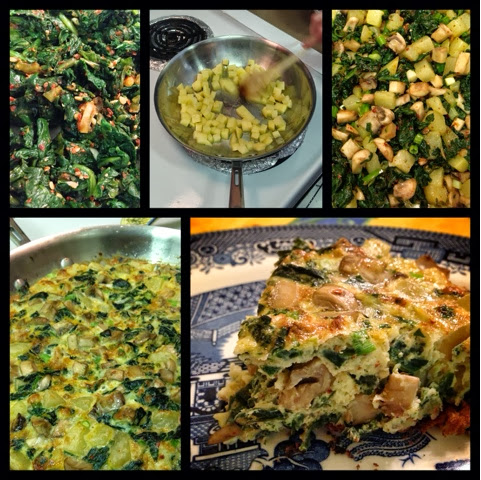 S. ended up being convinced, and a good dinner was had by all.

Not a radical concept--adding spinach to a frittata--but the Korean spice added a nice little kick. Just make sure that you squeeze out most of the soy-sauce liquid from the seasoned spinach.

(By the way, the link to the 'yahng-nyum kahn-jahng' recipe above--not my favorite, but it's a start...I've played with it and it's more like the 'kitchen sink' version on that website--minus the vinegar. And I usually use honey instead of sugar.)

And now, for something surreal,
a streetscape that I see on my way to work everyday: 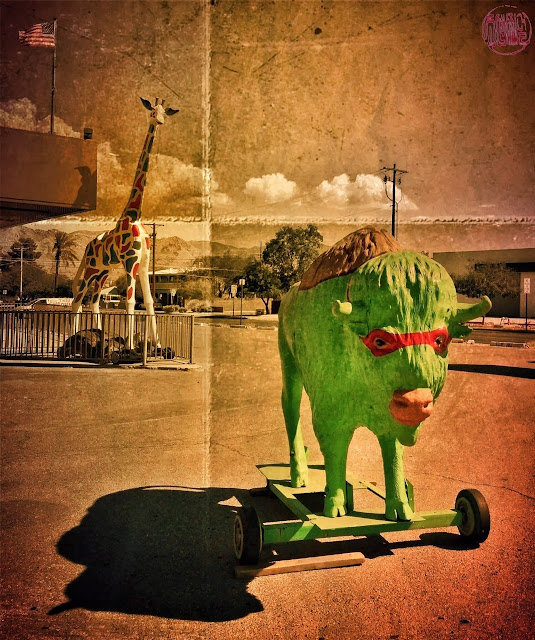 Doesn't this scene just cry out for a story? I mean, why is the giraffe behind bars? What is he saying? Why is the buffalo leaving? And why does he have a shell? Oh, he's a teenage mutant ninja buffalo...

(here's what one friend came up with:
"Life should be lived in the playpen of the street of dreams." Hmm...or, 'nightmares?') 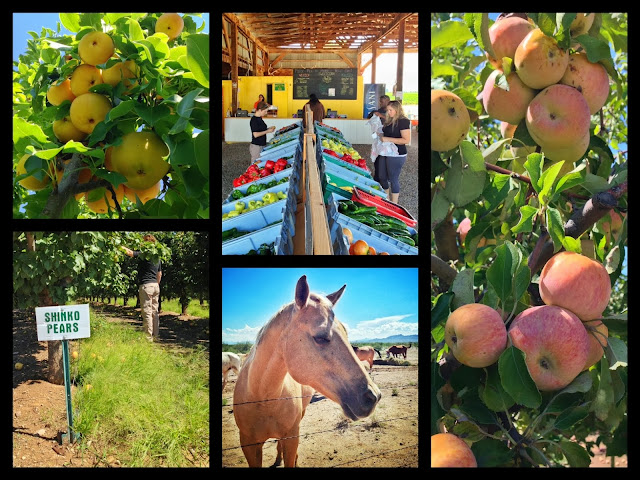 (here's the write-up I did for afar.com) 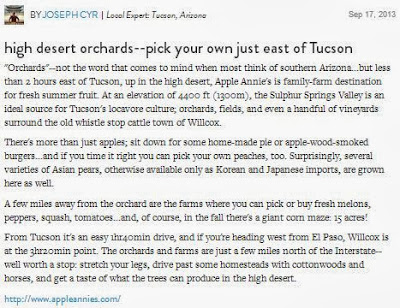 And it might seem morbid,
but I found the apples on the ground
to have their own textural 'beauty'--
after the summer, the wind, and the rain... 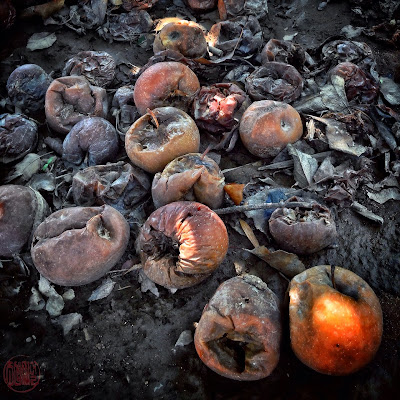 The other night, we met up with some friends for Korean food; ahh, check out that bubbling bowl of red: 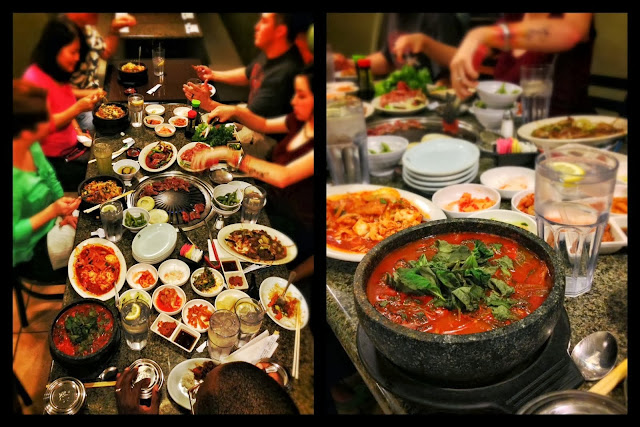 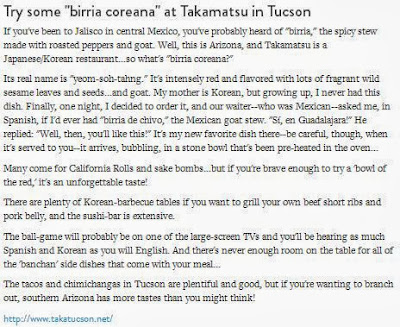 ...and from one of my favorite local bakeries: 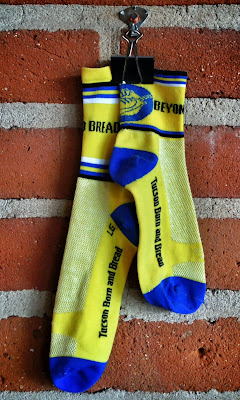 Gotta love the pun on the socks. 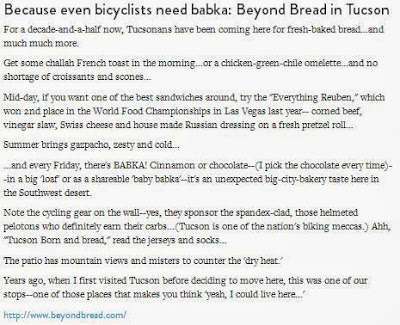 And with eating, there's running.
Our car accident is far enough in the past now, so, with the chiropractor's o.k., I've been trying some gentle runs...

...so Saturday morning (before I came down with whatever flu this is), I went to Sabino Canyon. Parts of the lower canyon are covered with sacred datura blooms...and I caught this bee coming in for a landing: 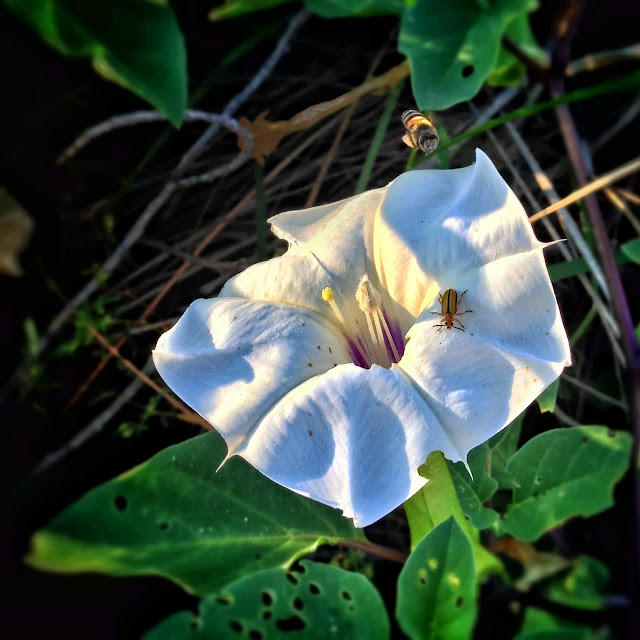 I just never get tired of these desert flowers... 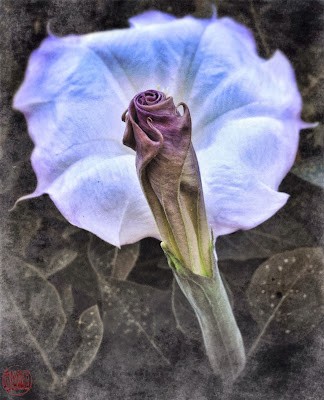 ...and although the thermometer might not yet know it, the canyon is just beginning to look like fall--something about the angle of light and the certain shade of green that the cottonwoods take on... 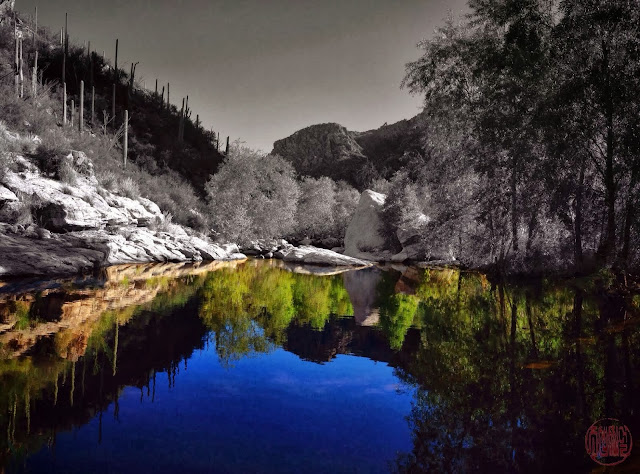