As the calendar speeds toward the new school-year, I've been working on organizing/editing some of the many photos I took in Korea back in June; I'd almost forgotten about this one: 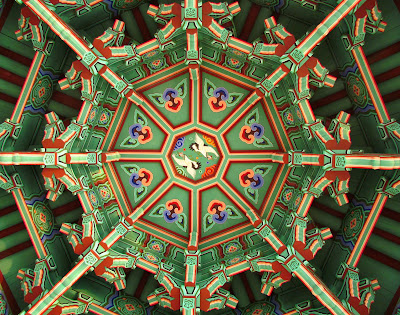 (below is a little anecdote to go with it--an attempt at summing up the photo's setting...)
"Korea--it gets under your skin," she said, with her Scando-Slavic English.
My wife and I had struck up a conversation with the only other person resting in the pavilion's shade on this summer afternoon in Seoul, in the garden of the new National Museum. She was--is--a Finnish expat, who came with her Polish husband when he got a job in the South Korean capital several years ago.
After walking all morning through galleries ranging from Neolithic to Neo-confucian, it felt so good to rest our feet. And so we sat by the pond reflecting the world's sixth-largest museum. The pavilion has an octagonal roof covered in green celadon tiles. Looking up at the symmetrical ceiling is almost hypnotic.
The last time I'd been to Seoul was nearly twenty years ago; expats, aside from diplomats and U.S. military, were rare then. Not any more. The city is full of French bakeries and Canadian teachers. Indonesians in head-scarves are common in the subways...and under an octagonal roof, with cranes presiding, a Finnish woman telling us about how she loves the 'passion' of Korean culture, and how she does not miss the spice-less-ness of northern European food...complaining about how difficult it is to "meet people here..." But then saying, "yes, hard to just make friends with strangers, unless you are introduced by somebody. Once that happens, then you're in."