late summer in Tucson--in and out of Outside:
from trails for bikes to 'Tostitos preparados'...
...in and out of Outside magazine, that is--this month's issue names Tucson 'best town in America' for road-biking...Yes, this is indeed a desert metropololis full of velophiles and bike-lanes, surrounded by miles of Sonoran desert and mountain terrain, trails, etc. etc... (Runner-up town?--Boulder, Colorado.)
This morning--my last 'Monday of Freedom,' since students return to classrooms a week from today--I went for a bike ride along the Rillito--the seasonal river that cuts across the Tucson basin from east to west. Most of the length of the river has been developed into parks and trails--part of what makes Tucson one of Outside magazine's 'best towns:' 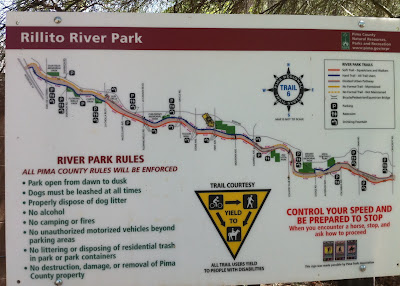 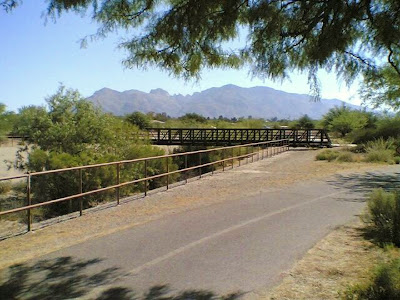 ================================================
So...so much for what's in this month's Outside magazine.
Now, for something decidedly out of that publication: tostitos preparados.
Yes, 'tostitos' as in the brand-name corn-tortilla-chip. It's a Mexican street-food classic, but you won't find it at any Taco Bell near you...
Yesterday, S. and I were introduced to this snack experience by a couple of amigas mexicanas...We'd heard about this concoction (definitely only a 'sometime-food,' since it's pretty far to the 'junk'-side on the junk-food-scale) but had never seen or tasted it.
In the photo below--look to the lower left of the chalk-board-menu: 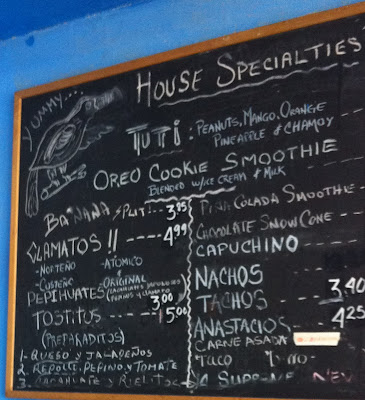 See it?--'TOSTITOS' and then, in the diminutive 'preparaditos'...
(The hole-in-the-wall joint was a classic example of how you can be in one city/country, and then go through  some doors and be instantly transported to a different world...S. and I immediately felt like we were back in Central America...could've been a raspadería in Nicaragua--the concrete-walled establishment didn't have the a/c running, all of the conversations were in Spanish...)
So--'what is it?' you ask...
Behold--in all of its still-in-the-bag-glory: 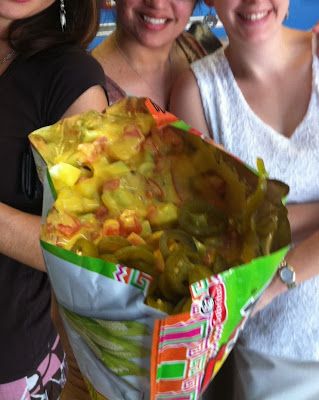 Sí, sí, mis amigos--you just take a bag of the chips--cut the side off, then top and fill with a mixture of melted nacho-cheese-sauce, diced cucumber, diced carrot, diced tomato, sliced jalapeños...and if you want, you can add peanuts, or 'chamoy', even shredded cabbage (!)...and it's served and eaten messily right out of the bag, preferably with one's fingers...As there were four of us sharing, we asked for plates and forks: 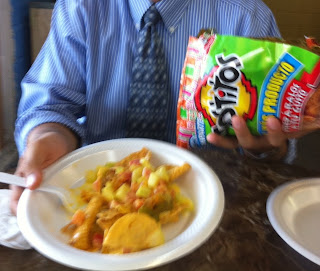 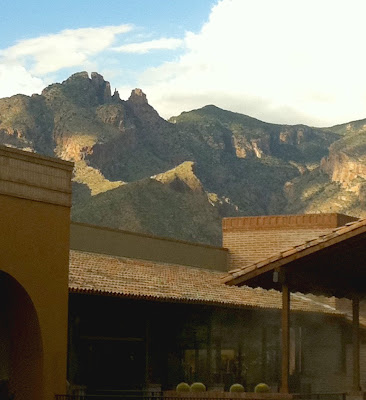 (yesterday evening--looking up at Finger Rock in the Santa Catalinas, from La Encantada mall...love having a camera on the cell-phone...and below, a view of downtown Tucson--I was running errands, and noticed that the view from the parking garage was kind of nice--actually made Tucson's small cluster of 'high'-rises look 'urban'...and I do love the multicolor-tiled dome of the Pima County Courthouse, built in the 1920's...)