...Spring break has come and gone here in Tucson...and along with it, the in-laws. My wife's parents were here for the past week; they left this morning to catch their flight at 'dark-thirty,' as my fisherman of a father-in-law refers to pre-dawn hours...

This morning, then, I didn't feel I had to tiptoe around the kitchen, trying to avoid disturbing my in-laws while getting my coffee before leaving early for work...I had a few minutes to read the paper, and in the local section, I saw this:

...another cheap morning thrill, to find a photo of mine published in the Tucson paper! ;-) Two juvenile Coopers' hawks cooling their talons in the fountain outside our front door--I took this photo last summer, and never again since then have I seen this pair land together like this, a symmetry of raptors.

From big birds to tiny birds:

This past Sunday, we took my wife's parents out to the Arizona Sonora Desert Museum, and in the hummingbird aviary, there were a couple of easily-viewable hummingbird nests--Wow! The 'chicks' in the above photo are two-week-old Costa's hummingbirds. Below, a closer view of them--notice all of the 'pin'-feathers surrounding their heads, and how stout their beaks are. The speed with which birds change from hatchling to fledgling is amazing...

Nearby, an Anna's hummingbird was feeding her five-day-old chicks--too small to be seen from outside the nest, but you can see the mother feeding them here:

Back to bigger birds--one of the biggest raptors here in AZ is the seasonal ferruginous hawk--migrates to live down here from fall through spring--a true 'snowbird:'

One of the smaller raptors--the smallest, I believe, in AZ--is the American kestrel. Cool eyes, eh?

...and the relatively common, but no less impressive, Harris' hawk:

...and with spring well under way, of course there are flowers, including these claret-cup-cactus blooms, which are just starting:

This year, the brittlebush, ocotillo, and palo verde are somewhat late, but the globemallow are at their peak right now--and the gardens on the grounds of the AZ Sonora Desert Museum have some less common variants--most globemallow are orange or apricot-colored, so this bright-red globemallow really caught my eye:

..and this grouping of pale pinkish-white globemallow and Parry's penstemon in the background--looks more like an English garden than a corner of the Arizona-Mexico desert:

Before heading back into town, we drove my wife's parents through part of Saguaro National Park, and I stopped to climb a short trail up to the Hohokam petroglyphs (between 800 to 1500 years old). These glyphs of antelope look to me to be leaping into the hills:

====================================
On Saturday morning, I thought my wife and her folks might enjoy some 'parent-child' time alone, so I decided to go for a hike in Catalina State Park--local reports have said that the wildflowers were at their peak--the best in years...I was able to check out a few spots one afternoon after work the week before, as the photos in my last posting show, but now I wanted to hike further in. So, up before sunrise, and when I started on the trail, the thermometer was a chilly 36 degrees. Fortunately, crossing the flowing washes, I was able to find boulders; didn't want to get my feet wet with such a cold start to the day: 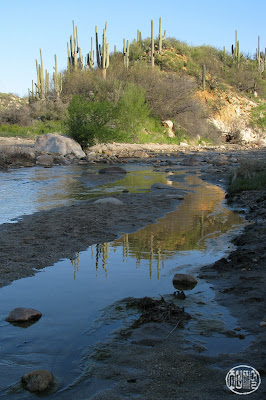 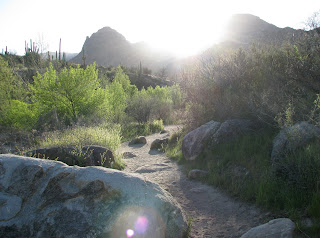 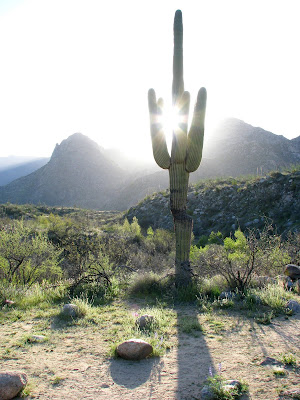 After a couple of miles, I started seeing the expanses of Mexican gold poppies--but even after the sun had been up for a while, it was still too chilly for the flowers to open up: 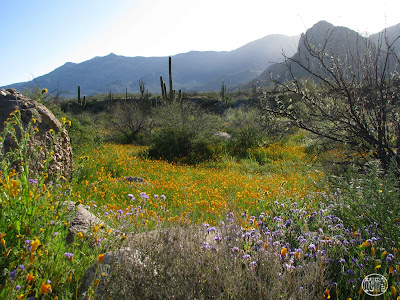 I didn't have to wait too long, though; the desert warms up quickly,and soon the poppies' "faces" were becoming visible...

The trails continue, opening up to seemingly endless expanses of wildflowers; and the further I hiked in, the more I saw fields of poppies mixed in with heliotrope, lupine, chicory, desert marigolds...This is only our third spring down here, but even many locals have said that it's been one of the most spectacular spring 'shows' in years. The hills to the east of Tucson--entire slopes around Safford and Clifton--are also in bloom...

The contrasts in textures are so vibrant--spiny cactus, scraggly still-leafless-mesquite, and the soft carpet of petals all around...

The lushness of this spring display belies the aridity...the blooms are so ephemeral...One spot where I took S. just two Sundays ago is now practically 'all dried up'--just a few flowers left...Catalina State Park is lingering a bit more, but I think that by next week, the poppies will be gone. The lupine tends to linger a bit longer, and brittlebush is just starting to bloom, but these golden-yellow faces shimmering in the breeze--gotta catch them NOW...

...and on the way, we stopped at the San Pedro riparian reserve just east of Sierra Vista--birdwatching par excellence--one of the major migratory flightpath corridors in North America...and from there, looking back across the grasslands at the 9400' snowcovered peaks of the Huachuca mountains:

I lived just up the road from here for a couple of years when I was in first- and second-grade. These mountains marked the horizon of 'my backyard'--always visible from anywhere in town--from school, from the grocery store, from our back porch...I missed them when we moved back east. I missed the stars at night, the endless sky, the sound of coyotes...and even as far back as the third grade--those first few months away from these mountains, those first weeks of the school-year when I couldn't understand my teacher's Southern accent--I knew I'd eventually move back out west.
...
A couple of weeks ago, I came across an essay that articulates some of my feelings about "The West;"
below is a link to it.
East to the West

A writer contemplates where the West begins, both in the landscape and in his life.
http://www.hcn.org/issues/42.5/east-to-the-west
Posted by J. Cyr at 10:22 PM