In last month's Actualité, (a Newsweek-type magazine from Québec that I've subscribed to off and on over the years), this cartoon caught my eye: 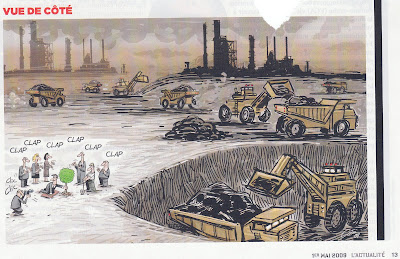 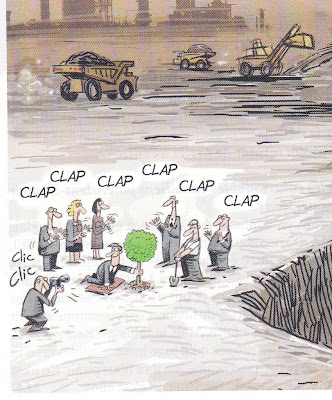 (You're never allowed to forget, while in the scenically-situated-yet-somewhat-decrepit-city, that here is the birthplace of emperor Napoléon I.)
...and from June of fifteen years ago, another stitched-together panorama of a view that can, alas, no longer be had: looking from the rooftop observation deck of the World Trade Center in New York, east over the East River and the Brooklyn Bridge over Brooklyn Heights:

...and from the same now-inexistent platform, which stood 1300 feet above Lower Manhattan, looking north toward mid-town Manhattan and the Empire State building, which is, once again, the tallest structure in New York City:

(At the bottom center, you can see Washington Square Arch, the heart of the NYU neighborhood, and Fifth Avenue leading from it up to the right of the Empire State Building.)

========================
...neither here nor there,
while running some errands this morning, I heard an interview on the radio with the author of an article that appeared in the NY Times a couple of weeks ago.
He's a motorcycle-repair-shop-guy-with-a-Ph.D.
Here's the article: "The Case for Working With Your Hands."
A bit long, but well worth it...
As a teacher, I feel like his voice needs to be heard more clearly,
especially in school counseling offices...

...our upcoming move to the "javelina house," as a friend of ours (E.) put it, is less than three weeks away; time to start packing!
My wife and I were realizing that this will be our tenth address.
(The process of getting ready to move to, moving to, then moving back from Nicaragua involved several addresses in just a couple-year period.)
And really (no, really) we don't even like moving...
Posted by J. Cyr at 12:22 PM